When it comes to Nutcracker, I feel like dancers, critics and dancegoers fall into one of two camps: You either love or loathe it.

I fall into the first category. I’m a sucker for most things holiday-related: twinkly lights draped all over the city, old-school Christmas carols playing at home, a pine tree in the corner of my living room—even freakin’ gingerbread lattes!

Given that, it’s probably no surprise that I love the Nutcracker, too. I’ll admit that I usually wish I could fast-forward through the party scene and skip to “Snow” and the pas de deux. And the embarrassingly outdated, stereotypical Land of Sweets characters make me cringe. But over the years, the Nutcracker has remained one of my most enduring holiday traditions. Over the past 31 years, no matter where I’ve been, or what was happening in my life, I’ve always been able to count on the familiarity and nostalgia of the Nutcracker, every Christmas season.

Like many kids, one of my earliest ballet memories was seeing City Ballet’s Nutcracker . I remember being amazed watching the tree grow, and seeing the Mouse King with his manyВ heads.

In years following, my mom also took me to New York Theatre Ballet‘s one-hour production for kids, and the Harlem Nutcracker.

When I moved back to NYC in fall 2006, one of my “welcome home”.gif"abt's nutcracker" href="http://www.abt.org/performances/nutcracker.asp" target="_blank">ABT’s Nutcracker on two different years—and really enjoyed Ratmansky’s fresh take on the ballet. (Like how Clara and her Nutcracker prince mirror Sugarplum and her cavalier, as they dance together in the snowy end of Act 1.) 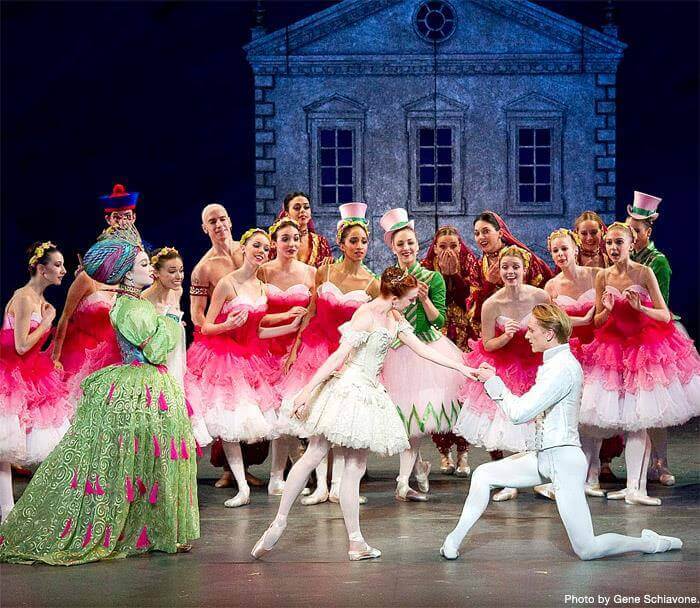 And with my own return to ballet, I’ve had the chance to perform “Snow” and “Flowers” during the last two Novembers. (We did both pieces in soft shoes, though I’d still love to dance them en pointe…) 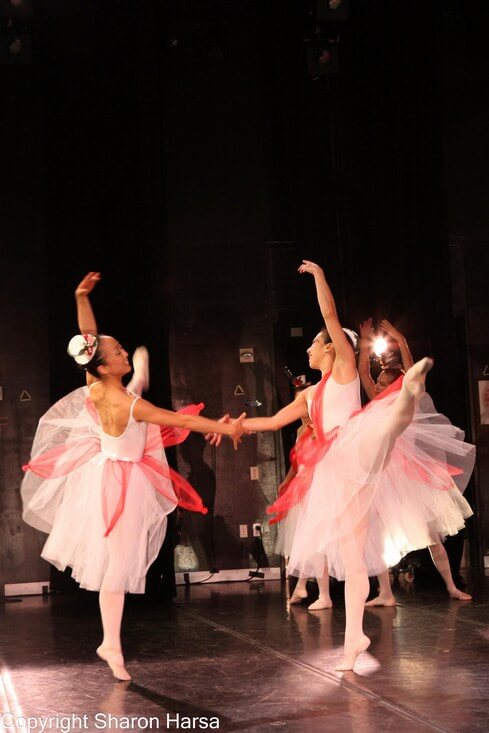 Last December, when I was in London, my parents surprised my best friend and me with tickets to see the Royal Ballet‘s Nutcracker. That evening at the Opera House was a big highlight of my quick trip. 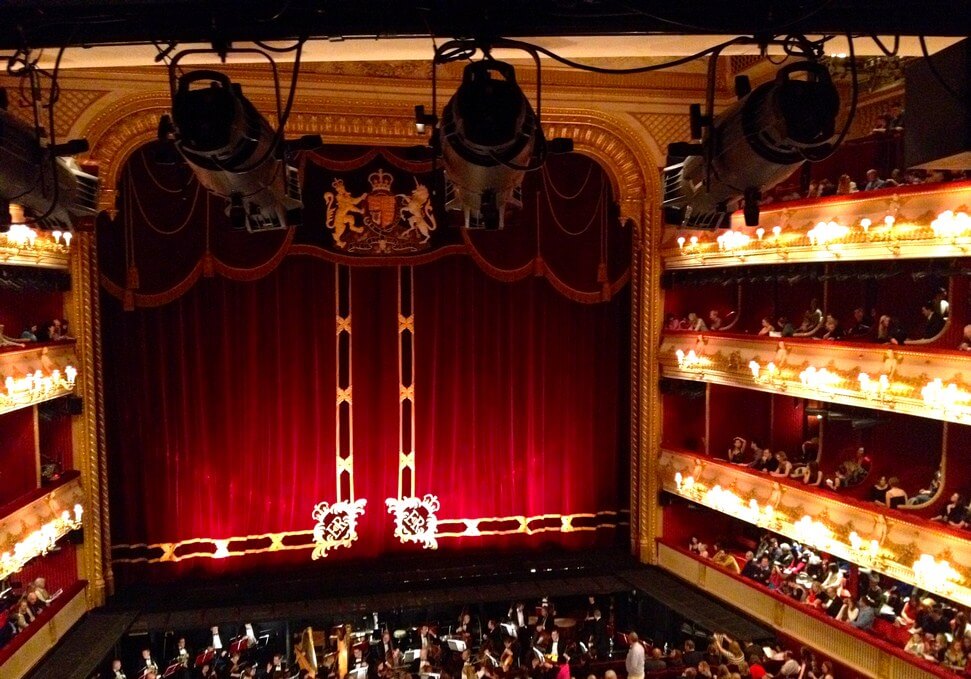 Tonight, Evan and I are seeing City Ballet’s production. As a New Yorker, I’m a bit biased—Balanchine’s version has always remained my favorite. 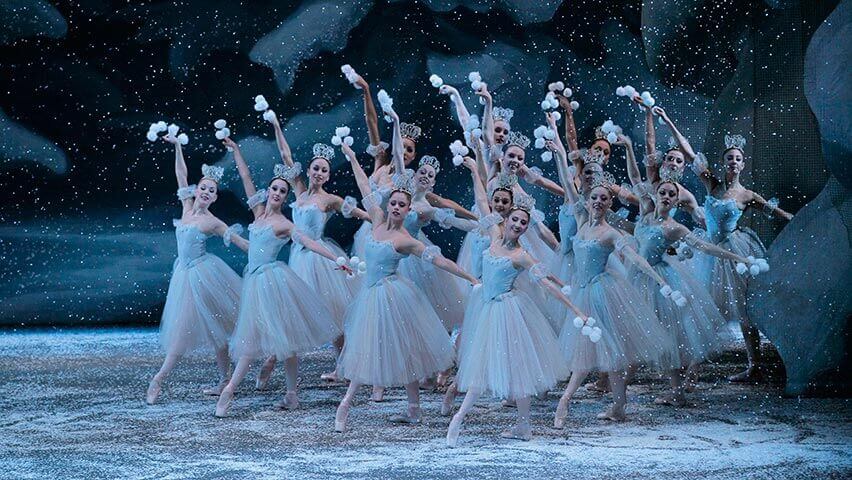 I was also surprised to learn that Evan has his own Nutcracker memories, about the same production. When he was a kid, his mom used to take him suit shopping, then to Houlihan’s for lunch, and then to City Ballet’s Nutcracker.

…now if only someone would please update the Land of Sweets! рџ‰

As you may have noticed, from my lack of posts, this holiday season has been nutty! But as hectic as it’s been, I’ve enjoyed every minute: spending a whirlwind long weekend in London with my best friend. (Highlights coming soon!) Seeing Ailey during their annual City Center run (Wayne McGregor’s “Chroma” was the highlight of the program I saw) and ABT’s Nutcracker. And celebrating Christmas with all my loved ones, yesterday. (Mal and Peter are the best hosts, ever! They plan the menus, do all the cooking and somehow manage to mix and mingle with everyone.)

In a month filled with great times, one experience especially stood out as a highlight: Seeing the Royal Ballet,В in London.

Like I’d mentioned, my best friend, Reen, and I both tried to get Royal BalletВ Nutcracker tickets weeks ago, but they were sold out. My parents (who I already knew were the world’s most awesome parents), however, surprised me with tickets before my trip.

They’d purchased them via Stubhub. And in an additional surprise, the seller included this beautiful note when she mailed the tickets. (I’ve also transcribed it, below, since it’s a little hard to read.) 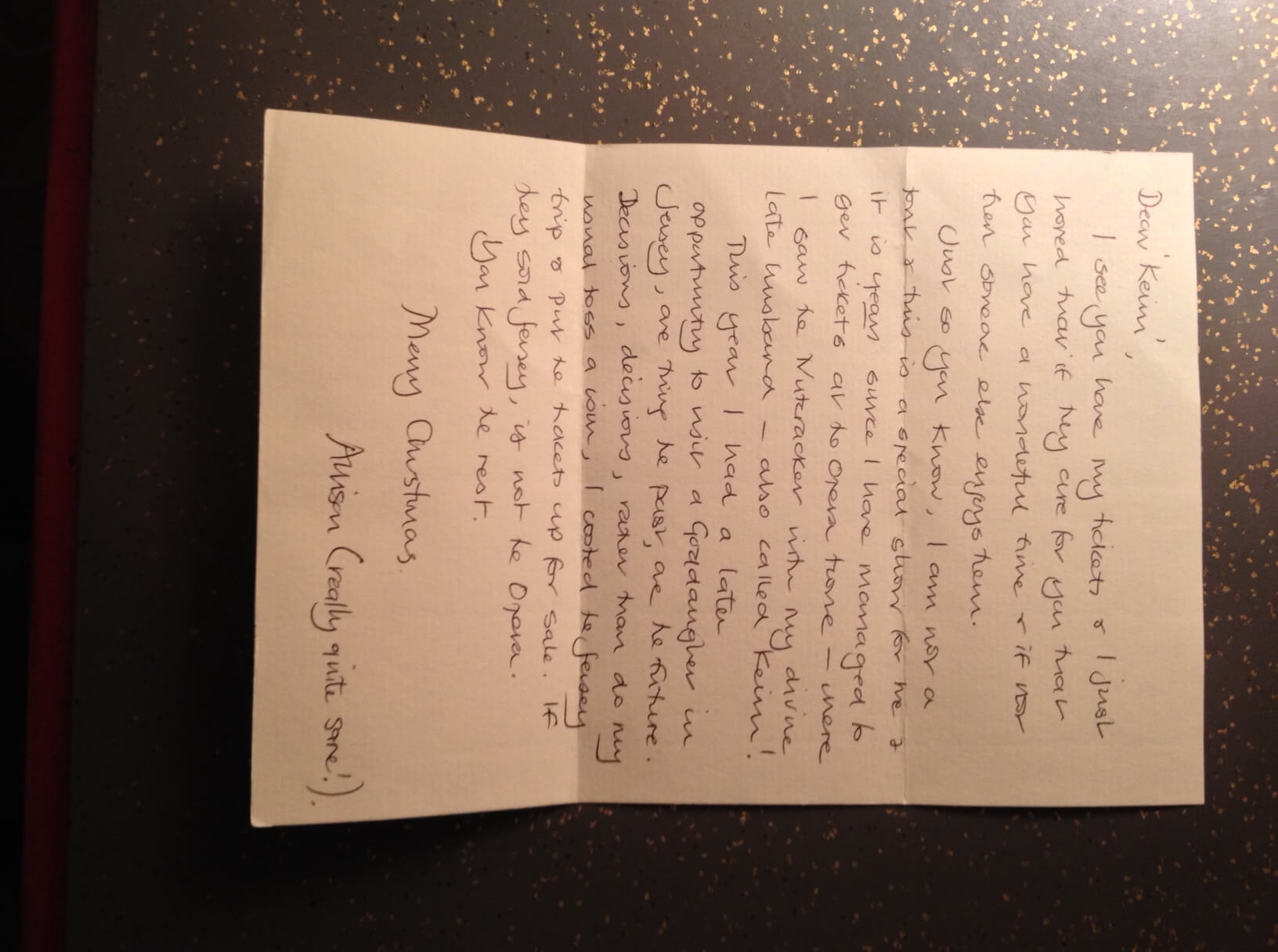 I see that you have my tickets and I just hoped that if they are for you that you have a wonderful time and if not then someone else enjoys them.

Just so you know, I am not a [illegible] and this is a special show for me and it is years since I have managed to get tickets to the Opera House—where I saw the Nutcracker with my divine late husband—also called Kevin!

This year, I had a later opportunity to visit a goddaughter in Jersey, one thing the past, one the future. Decisions, decisions, rather than do my usual toss a coin, I costed the Jersey trip and put the tickets up for sale. If they sold, Jersey, if not the Opera.

You know the rest.

…I nearly cried after reading that! (And, to be honest, got a little teary while typing it up, just now!)

Dressing up and going to the Royal Opera House was so exciting. For such a renowned theater, it’s surprisingly nondescript from the outside. 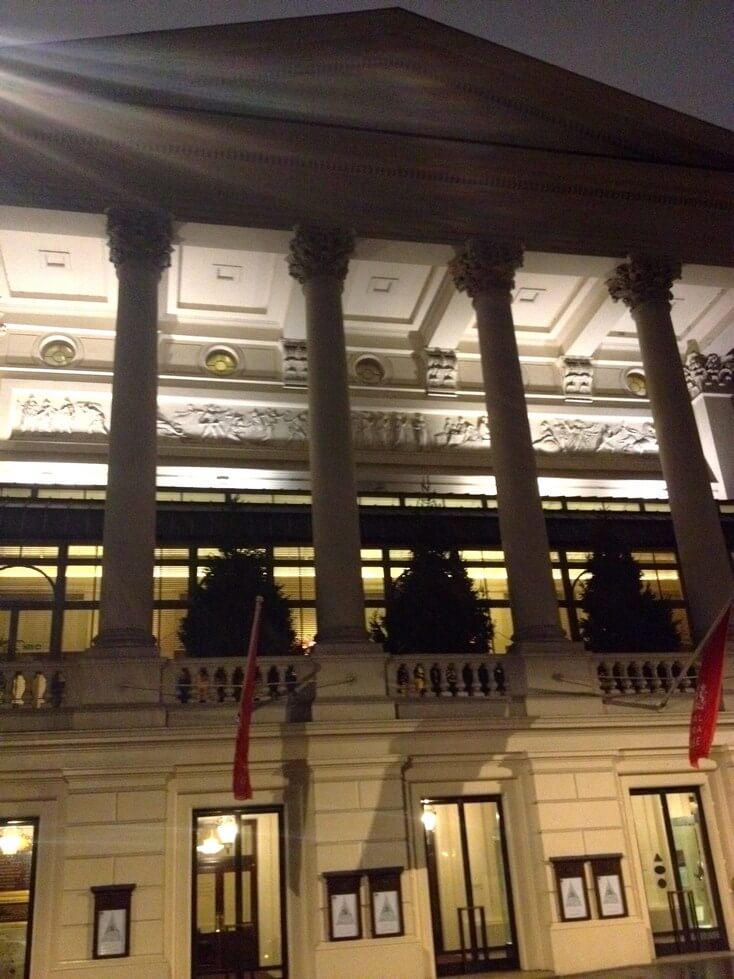 I was also shocked at how small it was, in the inside! I suppose I’ve become accustomed to the massive proportions of the Koch Theatre and the Met Opera at Lincoln Center.

Our seats were in the center of the balcony, but it felt super-close to the stage. Since the theater is so intimate, there isn’t a bad seat in the house.

The performance, itself, was great—I really enjoyed watching a production that was new to me. 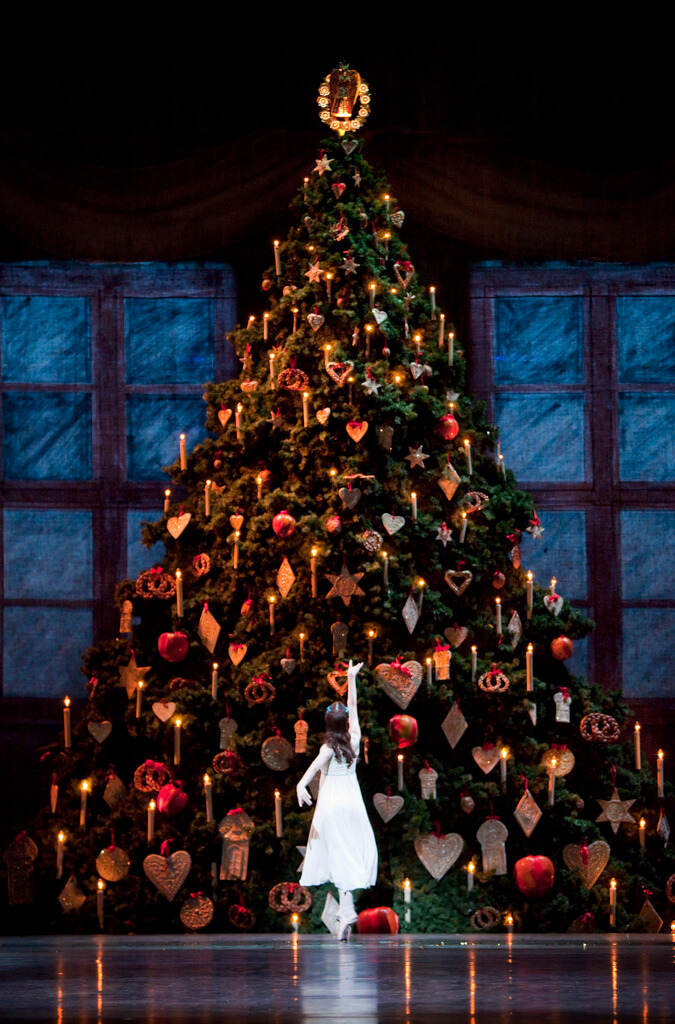 Unlike in Balanchine’sВ Nutcracker, the version I’ve seen the most, Clara is a company member, rather than a child. She dances en pointe through most of the performance, and is featured in most numbers. 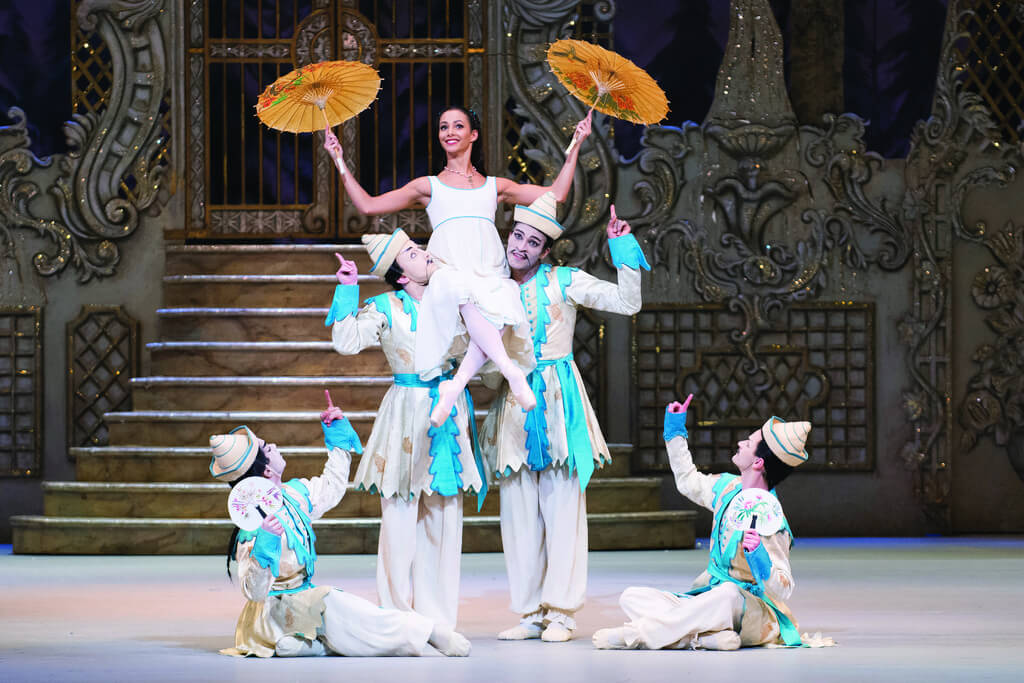 Plus, it was interesting to see how the company still keeps the tradition of putting most dancers in wigs. I can’t recall a U.S. company that does the same! 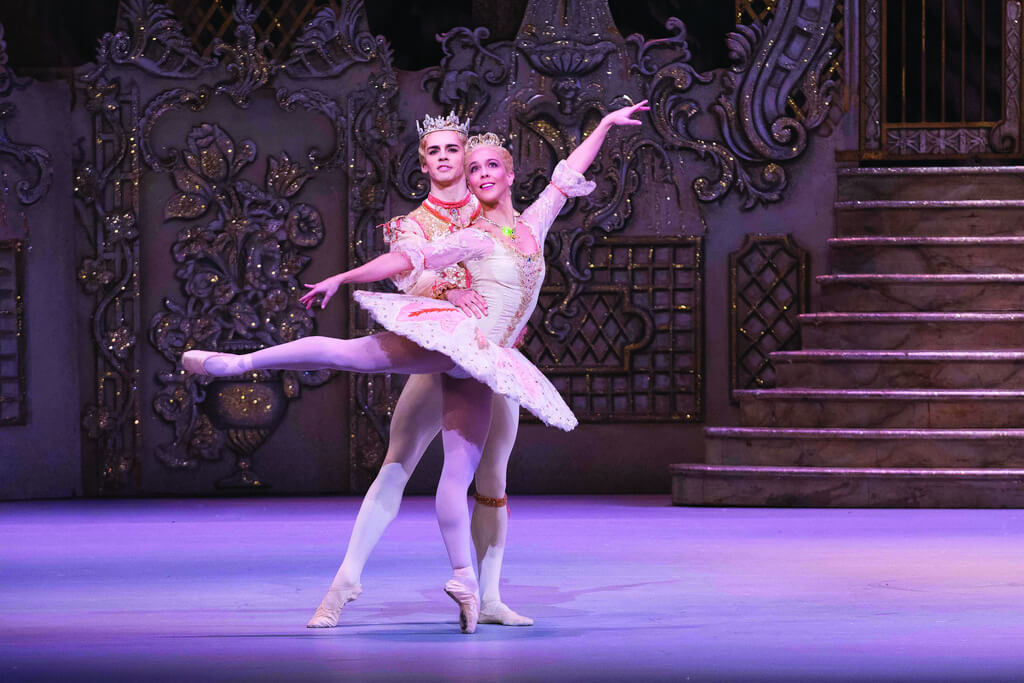 One particularly special moment, for me, came at the end of Act I, during the “Waltz of the Snowflakes”—my favorite part of the ballet. I’d forgotten that the version of “Snow” that I’d performed last year was partially based on the Royal Ballet’s choreography. So when the snowflakes came out and started dancing, I remembered that I had done many of those steps, myself. I felt truly lucky to see the Royal Ballet perform it live. I’d watched this low-quality YouTube versionВ many times in the past. It majorly pales in comparison to seeing it in person!

During intermission and after the performance, Reen and I went to the Opera House’sВ Paul Hamlyn Hall Champagne Bar, which is in a gorgeous glass atrium. 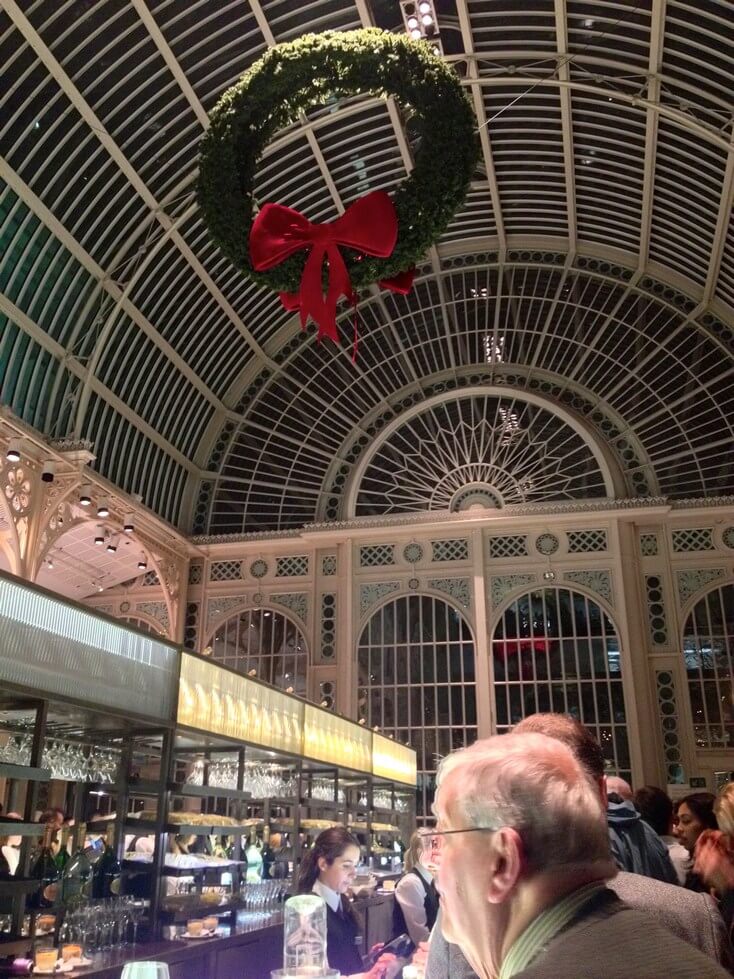 At the bar, you can pre-order food that would be set out for you during intermission. So Reen treated us to champagne and plates of smoked salmon andВ charcuterie, which we ate between acts. (Thanks Reen!)

I can’t thank my parents (and Reen!) enough for such an awesome night. You can just tell, from this photo here, how thrilled/thankful/happy I was. And still am. 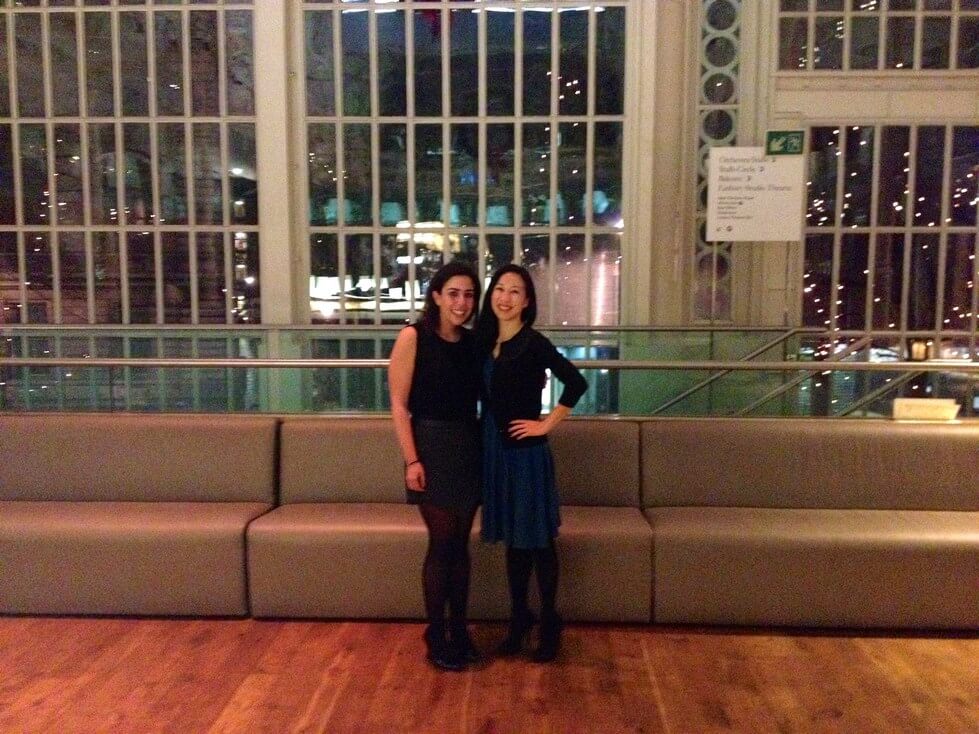 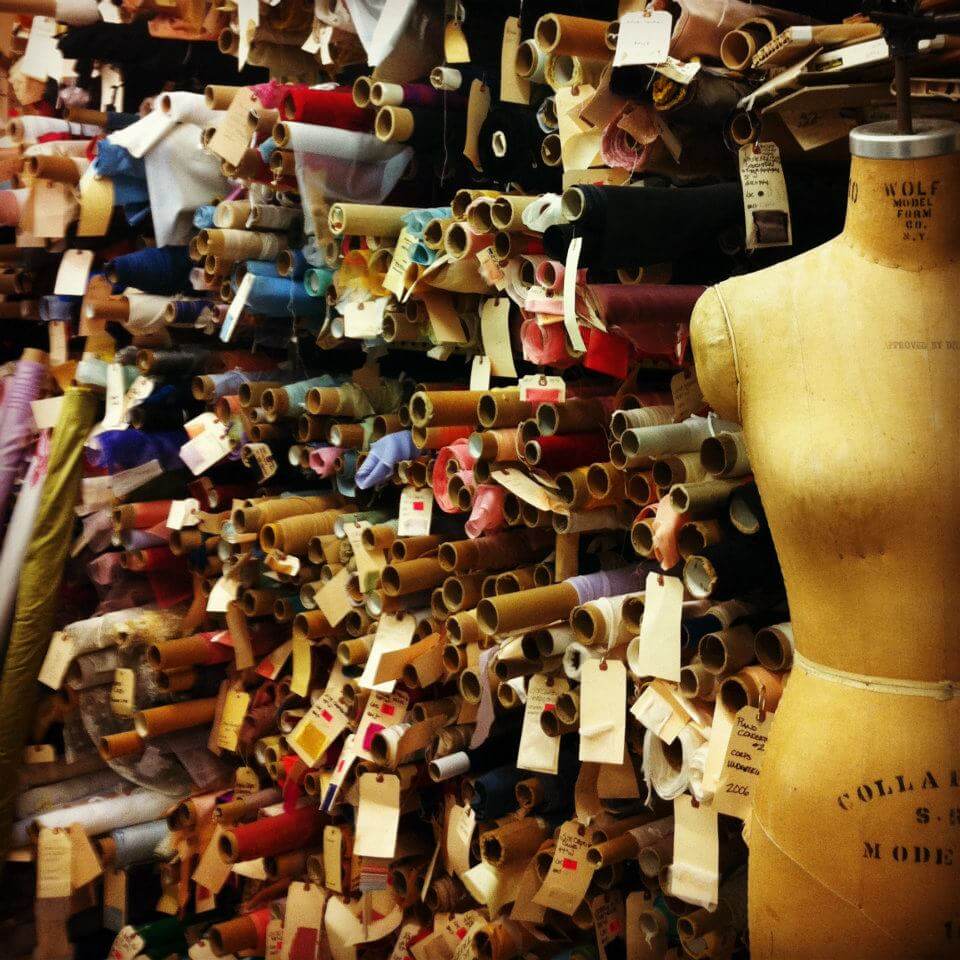 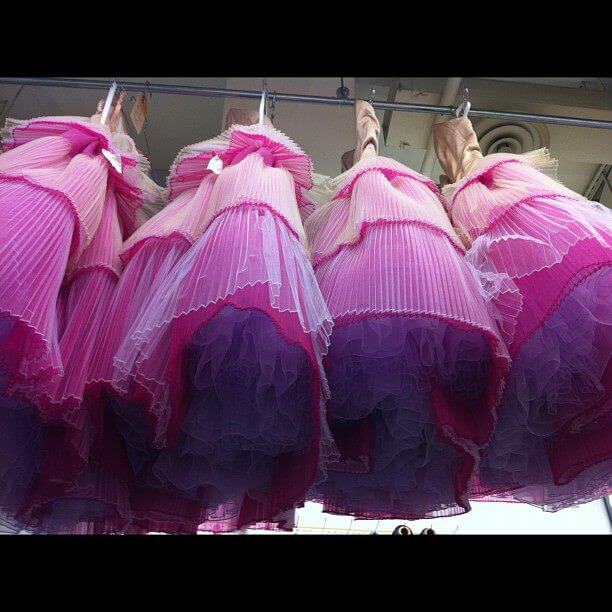 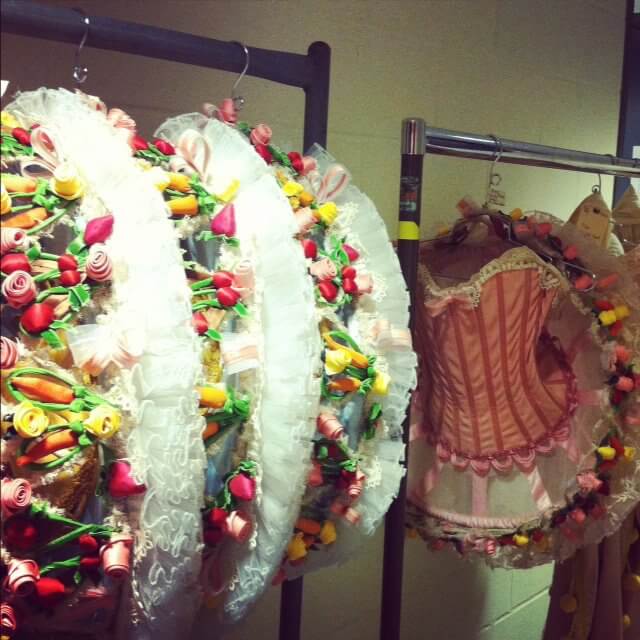 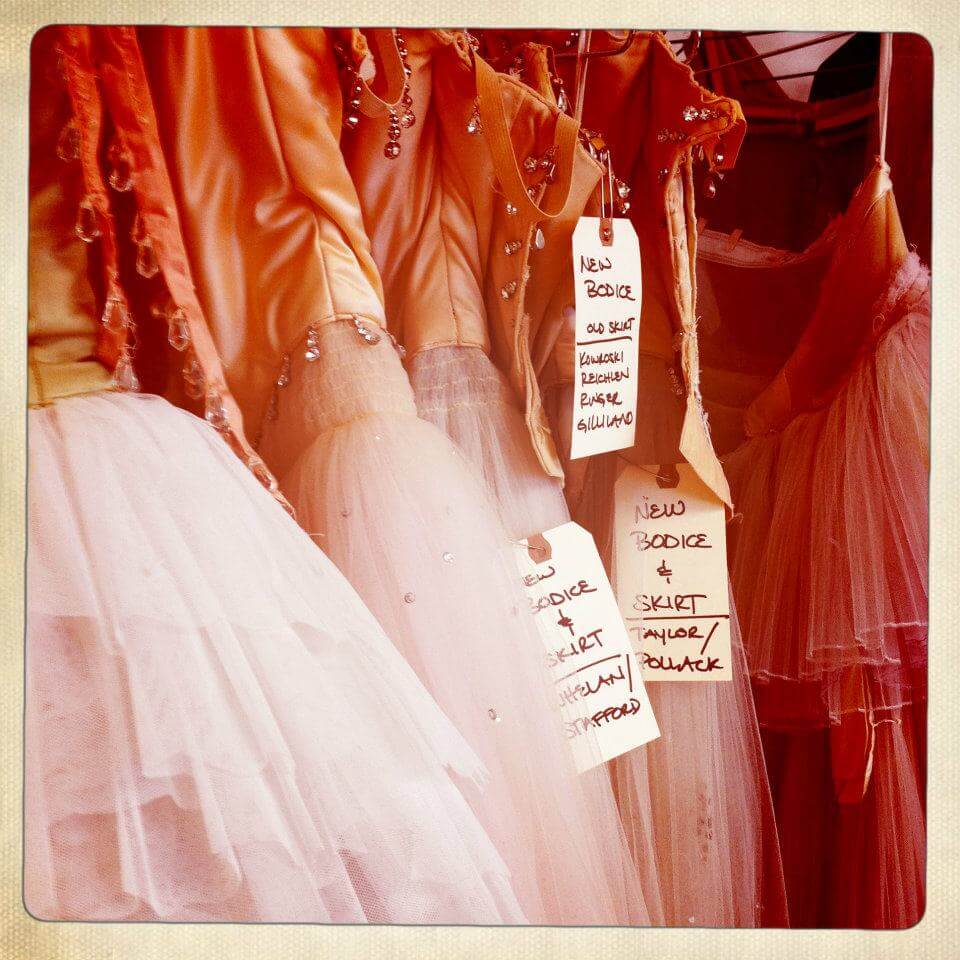 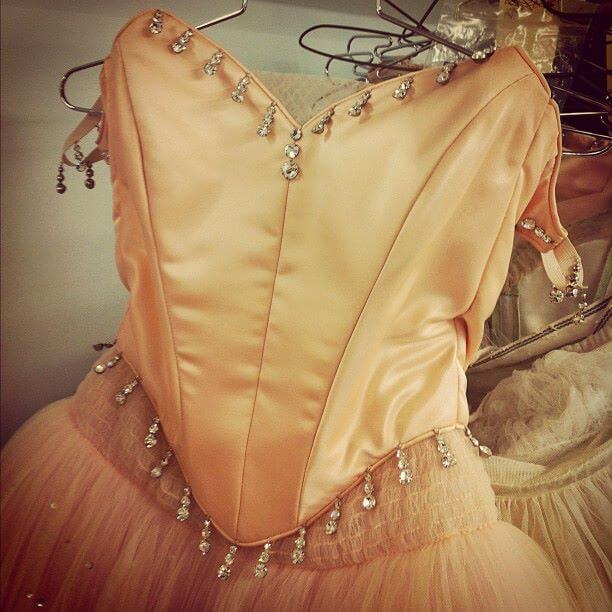 Is it just me, or did Thanksgiving fly by?

Though the last few days were fleeting, they were filled with so many moments that reminded me how much I have to be grateful for. I celebrated Thanksgiving with my family—and ate a ton of delicious food. And last night, my parents and I attended a benefit dinner for the family of two Hurricane Sandy victims in Staten Island. Though the occasion was sad, the event garnered a great turnout; it was truly wonderful and uplifting to see how many people came together to offer their support.

But the biggest highlight, for me, was dancing in another showcase at Ailey. This time, we performed the “Waltz of the Snowflakes” from the Nutcracker—my favorite number from the ballet and a piece I’ve always wanted to dance. I’m not in holiday mode yet, but the piece was the perfect way to kick off the season. And I was thrilled—and appreciative—that so many of my friends and family came out to watch. That, alone, made my Thanksgiving! (Thank you all! <3)

The “Waltz of the Snowflakes” never gets old—I’m surprisingly not sick of it, despite hearing it hundreds of times over the past few weeks. So I’m kicking off the holidays here, too, with a clip of the Royal Ballet performing it. (Just a tad better than we did. ;)) I’m always amused at their blonde wigs!

How was your holiday? I hope you have lots to be grateful for, as well!