I’m super-excited to be heading to the Maryland shore this weekend. Like I mentioned earlier, I’ve been feeling a little fried and in need of some lazy beach time. And it’s been so freaking hot in NYC!В It’ll be a relief to cool off amid the waves. Plus, my best friend is joining us and giving me (a non-driver) a much-appreciated ride. She wants to tick off my entire Maryland bucket list, but I’m not so sure that’s going to happen in one weekend. рџ™‚

Here are some links I’m loving this week. Stay cool!

The world in superlatives

11 avocado sandwichesВ (I’ve been on an avocado kick and eating 1/day for weeks now!)

East Nashville’s food scene (I ate my way through that city on a weekend trip, a few years ago–and I can vouch for the paletas being the perfect summer treat!) I’m feeling a bit fried, so I’m looking forward to my upcoming weekend at the beach. The other day, I realized that’s probably one of the biggest reasons I love traveling, even if it’s just quick weekend trips: I can’t really unplug and relax unless I’m out of NYC.

I don’t think it’s bad to be wired that way. I actually love having my days full from the moment I wake up until my head hits the pillow at night. In the hours between, I’m generally doing things that make me happy and fulfilled: ballet; running; going to dinner, drinks or brunch with friends or family; writing this blog ;); editing photos from trips–even working, both at my full-time job and on freelance projects. (Hey, gotta make a living somehow!) But those activities (minus work) are also how I relax, even though they’re pretty active. I can’t just zone out in front of the TV. I feel like if I have free time, I should be doing one of the above activities–or mundane to-dos like grocery shopping, cleaning, cooking, laundry (the bane of my existence).

But sometimes (like now, after a hectic few weeks that included finishing some projects), I feel the need to really unwind and recharge. I’ve found that the best way to do so is by getting a change of scenery. Just being out of NYC is refreshing. When I’m on lying the beach or hiking or exploring a new city, it’s easy to shed the constraints of daily life. I’m not thinking about getting from place to place on time or adding items to my to-do list. And–probably most importantly–I’m less apt to check my phone every few minutes (when I have service, in the first place). I’m free to enjoy exactly what I’m doing, even if it’s just sitting on the sand and watching the waves.

…and after a few days of that, I’m reenergized and ready to get back to NYC.

What’s your surefire way to relax? Do you need to get out of town, too? I’m headed to Maryland tomorrow for another weekend at myВ sister’s place. (Have to take advantage of her final weeks by the shore!) Our friend, V, is making the trip, too, and we’re thrilled that she’ll be beach bumming and crab eating with us. I’m also happy that the forecast is hot and cloudless–this week was so cold and rainy in NYC. At this point in the year, I fully expect to be wearing light dresses and sipping fruity cocktails, not schlepping around in a raincoat!

Here’s to a sunny and relaxing weekend! And to top it off, a few wanderlust links:

Yum! Sandwiches from each state

What songs remind you of your travels? (One of mine is Beyonce’s “If I Were a Boy”–in Spanish)

Pizza at Manco & Manco (formerly Mack & Manco) on the Jersey Shore–brings back memories of my childhood!

How are you spending this weekend?

Four years ago, I read a greatВ New YorkerВ piece about Sam Calagione, founder of Dogfish Head. At the time, I was new to the world of craft beers and had only tried Dogfish Head brews on a couple occasions. But immediately after finishing the article, I wanted to head straight to theВ Dogfish Head brewpub in Rehoboth Beach, Delaware. I was wowed at Calagione’s imagination for dreaming up different types of beers flavored with tea, juniper berries and all kinds of spices. And I was even more impressed at the lengths he went to create them: sourcing rare wood in Paraguay to build aging barrels, crafting a beer similar to what the Egyptians brewed back in 730 BCE and so on.

I never made it to the brewpub until Mal and Peter moved to Maryland. Dogfish Head is about 40 minutes away from their place and it’s become one of our go-to spots. Not surprisingly, they have lots of wonderfully quirky, experimental brews on tap. The food is good, too–Dogfish Head sources veggies and meat from nearby farms. Plus, beer is a key ingredient in many dishes.

The place is usually packed year-round, all times of day, even though it’s huge–two floors and an outdoor patio. But luckily, it wasn’t insane on Memorial Day afternoon. (I suppose everyone was still at the beach.) We scored a shady spot outside. Even though I was getting on a bus afterward, the beer menu still tempted me into ordering a drink. (How could I not?) I would have loved a flight, but opted for the Lil’ Tart, a light (only 3.4% ABV!), sparkling cherry wheat beer. Peter, who was not making a 5-hour trip back to NYC, ordered the Red & White (10% ABV), a Belgian-style witbier fermented with pinot noir juice. And since we were coming from a very taxing day of lounging on the beach, we ordered food, as well. В We shared a pizza (made with unfermented ale, of course) topped withВ prosciutto, goat cheese, arugula and balsamic reduction; a turkey burger and a BLTA (made with house cured bacon). It was the perfect way to top off the holiday weekend. I’m looking forward to returning–and getting a flight next time! *Ocean City, that is. I’m en route to В Mal and Peter’s and looking forward to a long weekend at the beach! The weather forecast isВ finallyВ warm and sunny, so I’m hoping to spend all three days lounging on the sand and listening to the surf. I’m feeling a bit beach-deprived (especially since the weather in NYC has been so gloomy, lately), so I’m really looking forward to this!

How are you spending the holiday weekend?

Last weekend, the fam and I met Mal and Peter in Saint Michaels, Maryland, to participate in the town’s first annual running festival,В featuring a half-marathon, 10K and 5K. We had a great time! Not only did we have perfect weather, but our races went well, too. 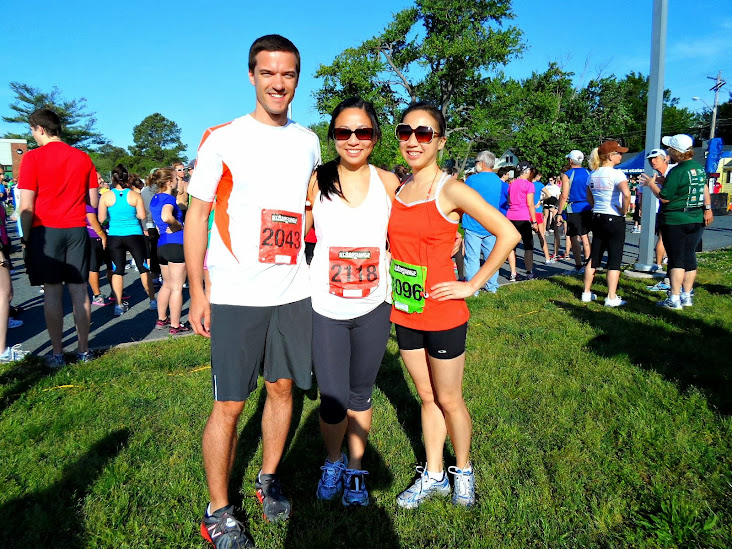 The 10K–my race–was first. The course wound through Saint Michael’s cute downtown, opened onto a road flanked by fields, then looped back through residential side streets and a small park. My favorite part was running through a little covered bridge close to the finish line.В Coming from the city, I thought the scenery was gorgeous. (Mal and Peter–now accustomed to seeing farmland everyday–later said they found the course a little monotonous.) 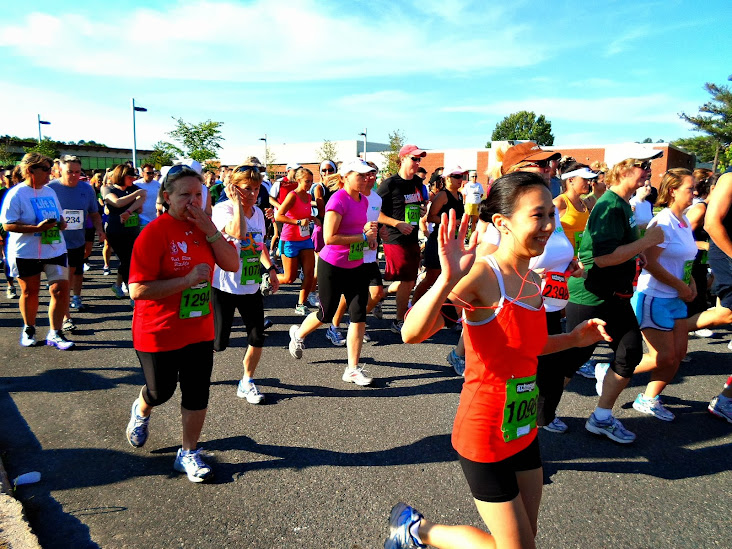 It had been six years since I ran a road race. Before, I never thought about strategy–I just went off and hoped to sustain an even pace. I always felt like I was going to die toward the end, though. This time, I aimed for a negative split. I ran my first mile at a steady jog. As a competitive person, I’ll admit that it was tough to see tons of people blow by me. But I just reminded myself that I’d be passing them later–and that turned out to be true. I stepped up my pace in the second mile and really increased my speed in the final miles. I was especially glad I took it slow in the beginning because the course, while “flat and fast,” was also hot–there was almost no shade and the temperature was in the 70s by the end of the race.

I felt great when I finished–so good, in fact, that I wondered whether I should have pushed myself more. 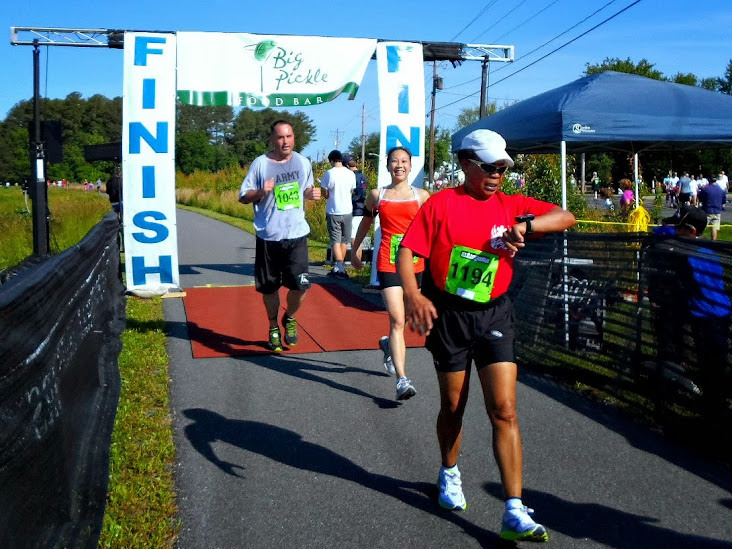 My time was 57:28, which equals about 9:16 a mile. That’s well behind my best 10K time of 53:31, but I was still happy with my results–not bad, considering I only restarted running 2 months ago! And now that I have a new base time, my goal is to keep running to chip away at it and try to beat my personal record.

Mal and Peter’s race–the half-marathon–started around the time I finished. So we hung around the finish line to watch the runners come in. I’m always wowed at how fast other people are. The top finisher clocked in at 1 hour, 12 minutes–not much longer than it took me to run less than half the distance.

Mal and Peter came in a little after the 2 hour mark. (They ran together the whole time–so cute!) 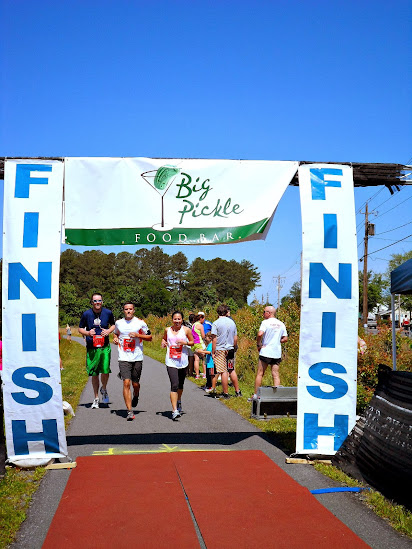 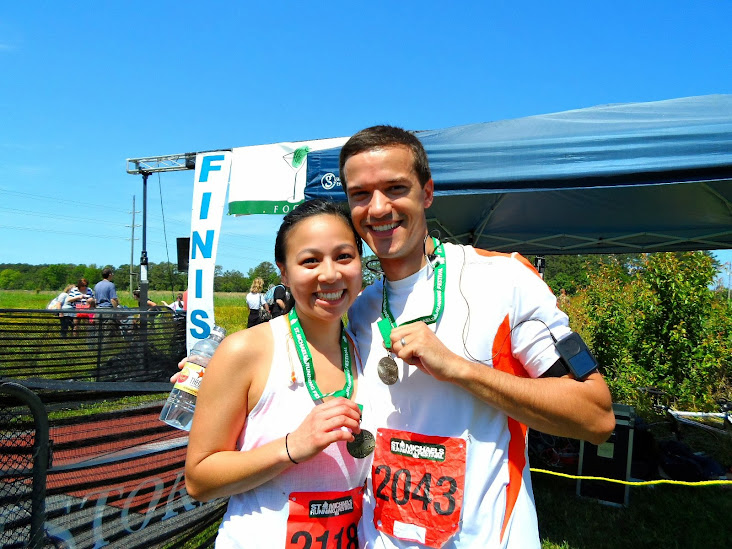 We rented a cottage for the weekend, which turned out to be way better than staying at a hotel. I felt more relaxed staying in an actual house and being able to make our own dinner and breakfast before the race. Plus, the aptly named River House, which I found via VRBO, was charming and in a gorgeous location. It had an expansive green yard complete with Adirondack chairs… 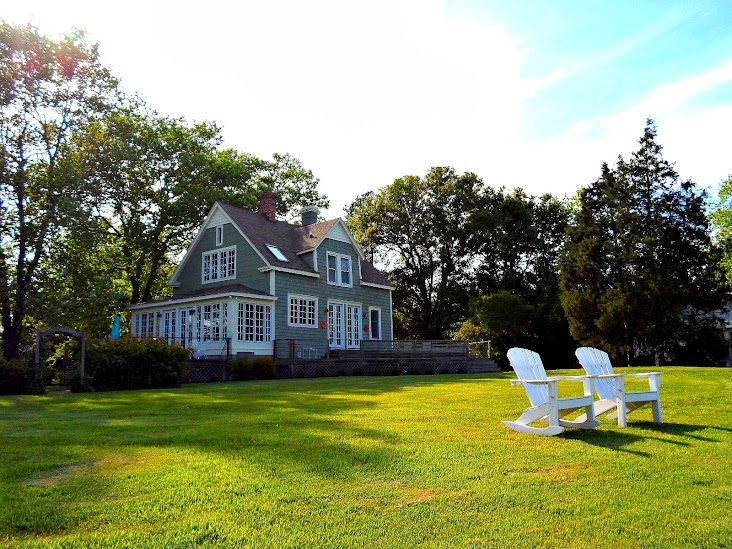 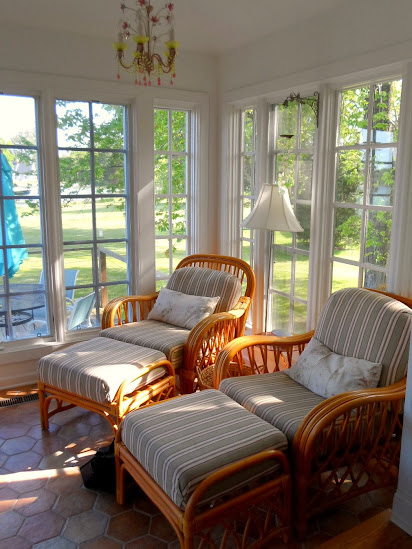 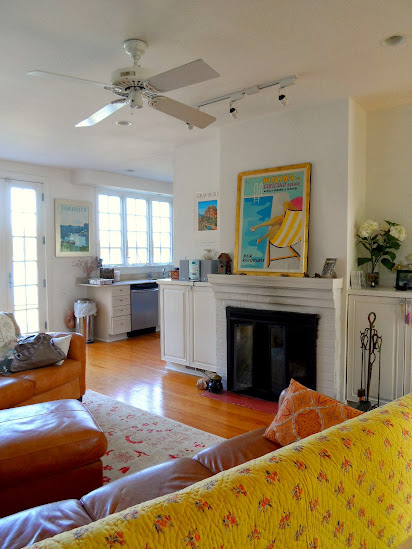 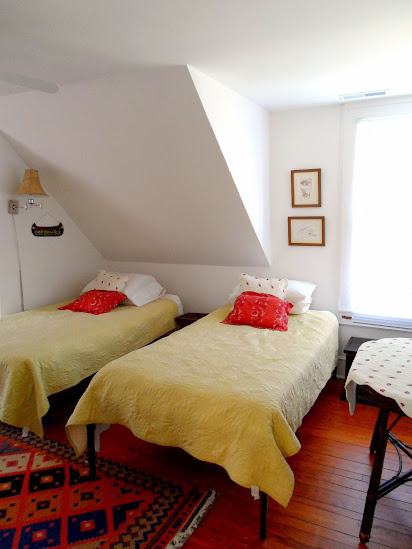 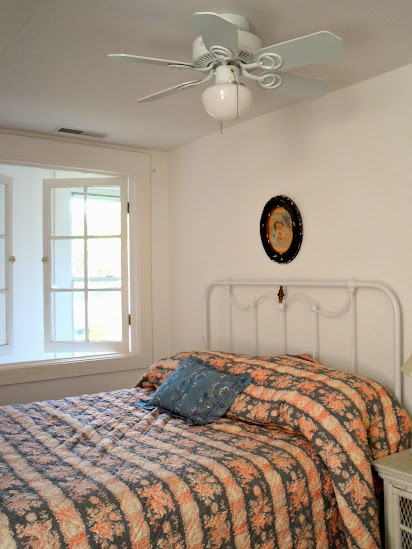 …and, best of all, a long wooden dock perfect for sunbathing and sipping drinks–which I promptly did the minute we got back. 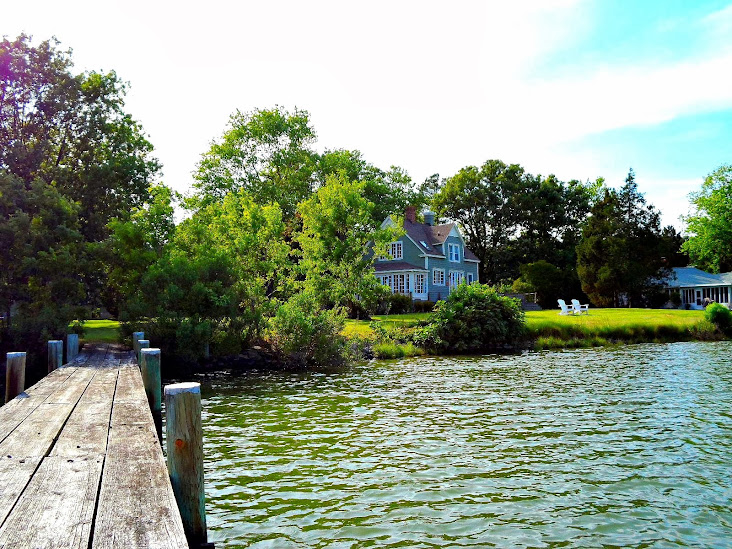 The town of Saint Michaels is equally as charming. Boutiques, restaurants, mom and pop shops, a winery and brewery line the quaint main street. We had a great post-race meal atВ Ava’s,В a local pizzeria and wine bar. Their pies were fantastic–light and crispy with fresh toppings. (I hate to admit it, but they topped the pies I’d eaten a few days earlier atВ Forcella, a newish downtown NYC pizza place.) The previous day, we also had tasty sandwiches at the Big PickleВ and great cookies and doughnuts from Sweetie Bakery. 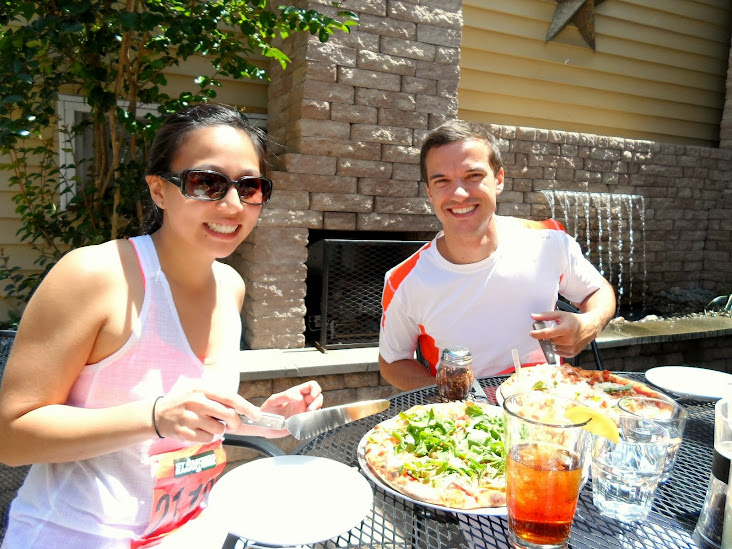 For our celebratory post-race dinner, we headed to the Crab Claw. To get there, we walked through part of the harbor, passing stately waterfront B&Bs along the way. 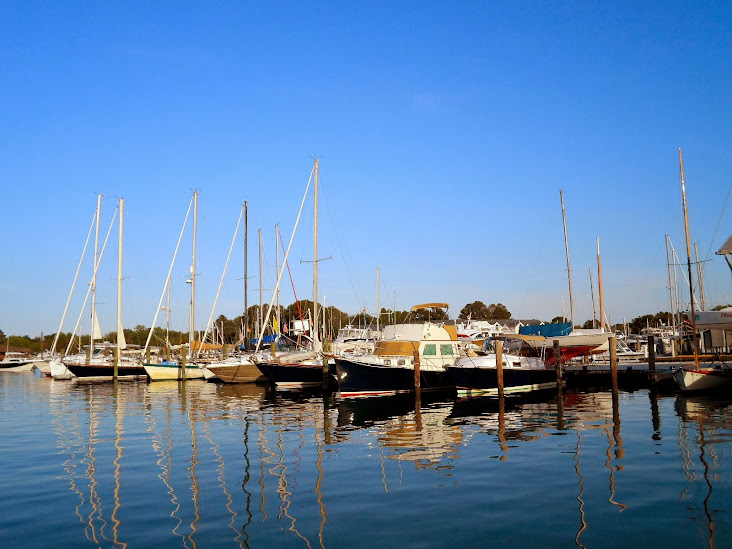 The Crab Claw is right over the water and has the perfect ambience for a summer meal. The tables are close to the edge of the pier and there are no ropes or guardrails. We joked about falling in–and then a little kid did, while we were eating! His mother and another patron fished him out. According to our waitress, it happens all the time–and the staffers usually have to jump in and rescue them!

Our waitress told us that due to the weather, the blue crabs they had that weekend weren’t the best. So we opted for snow crab. I was initially disappointed–until the snow crabs came out. They were fantastic and cooked perfectly–a great way to close a super-fun weekend.

Have you taken any running trips/vacations? I’d love to hear where–I’m already looking forward to planning another!