Last week, when it actually felt like summer, Karen and I were chatting about river tubing. Each year, we round up about a dozen of our friends (and about 8 times that amount of beer), drive to where Jersey meets Pennsylvania and spend a hot summer day floating down the Delaware River.

Somehow, during our conversation, she stumbled across these amazing images of a newlywed couple tubing in their wedding attire. Apparently, they met while tubing and wanted to “trash the dress” while floating down the Guadalupe River.

I actually think that’s a pretty cute–and hilarious–idea. All that’s missing are a few champagne glasses!

Would you do something like this on your wedding day?

And one more crazy tubing pic (which is NOT how it looks where we go!):

(Tubing wedding photos via Austin Americana Studio, tubing crowd photo via KGNB. Thanks to Karen for the links!)

I’ll admit that I was a little skeptical when Mal and Peter booked a videographer for their wedding. I figured that their photos would be amazing enough–would they really need a video, too? Plus, all the wedding videos I’d seen in the past were pretty lame with cheesy effects and stilted well-wishes from guests forced to speak into a microphone shoved in their face.

My opinion completely changed this weekend when Mal and Peter showed me their full-length wedding video by 15 Minutes of Frame. The company (coincidentally run by a fellow BU grad) provides each couple with a 20-minute full-length video, as well as a shorter highlights clip. The full-length video totally blew me away. It perfectly captured the emotion of the wedding ceremony (which left me sniffling and reaching for tissues), the fun of the reception and just how wonderful the day was for Mal, Peter and everyone involved (which had me laughing and grinning)–without being the slightest bit cheesy or cliche. I didn’t even cringe too much watching parts of my maid-of-honor speech!

Here’s the shorter highlights clip which is just as great as the full-length:

mallory + peter (highlights) from 15 Minutes of Frame on Vimeo.

Over the past week, I went to so many bridal appointments with my sister that it’s amazing I had time to do anything else. Some shops were great, others were…not. And at our last appointment, we might have found THE dress. A quick rundown of our search: 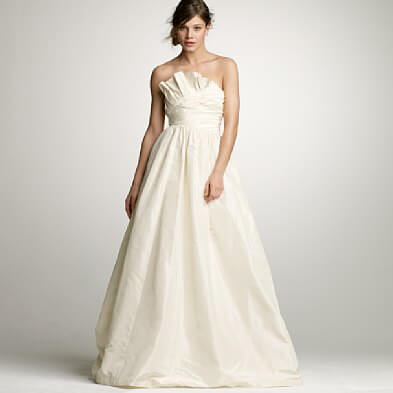 The Good: J. Crew: Their bridal salon on the UES was one of the nicest we visited. Viewing the gowns and bridesmaid dresses is by appointment only, and since they space them well, we only saw a few other people while we were there. (Unlike some other places mentioned later…) Our large suite contained two dressing rooms so Mal and I could both try on dresses (bridesmaid ones, of course, in my case), and not one, but two very helpful consultants worked with us. J. Crew’s gorgeous collection includes sleek sheath dresses and funkier ball gowns with patterned fabric and lots of interesting ruching. We all loved one dress, but agreed it wasn’t quite right for the season and venue. 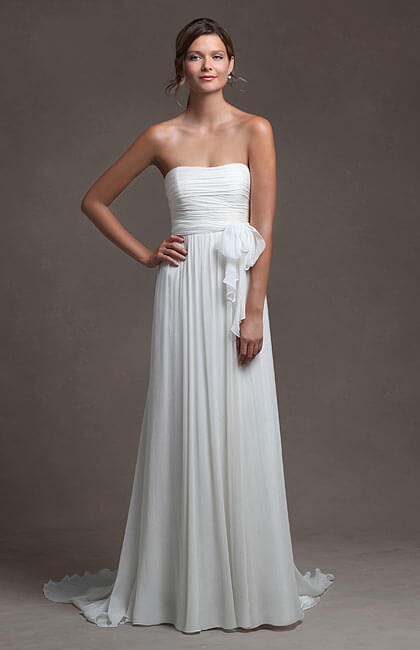 The Good: Jenny Yoo: I loved the dresses here; they were simple and elegant with sophisticated, clean lines. Mal found one that we deemed a strong contender. The salon (in the Garment District) was nice, as well, but not my favorite. Even though we had our own consultant and only two or three parties had appointments at the same time, all mirrors were out in the open, so it wasn’t as private as I would have liked. Jenny Yoo also has beautiful bridesmaid dresses in a variety of rich hues–including one we’re considering for the wedding. 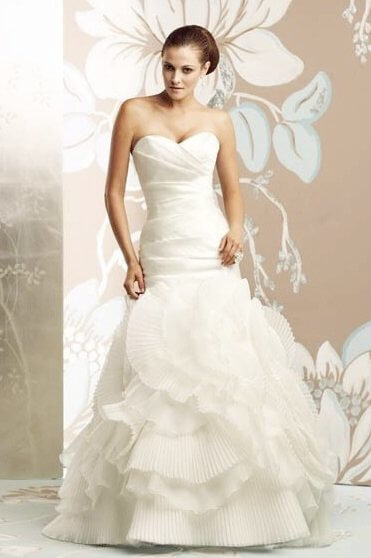 The Bad: RK Bridal: “I have a feeling you’re going to shut down as soon as we get in there,” my sister said as we entered RK (also located in the Garment District) and that’s exactly what happened. I was overwhelmed in seconds. Rack after rack of plastic-sheathed gowns packed the space and swarms of women sifted through them. RK doesn’t take appointments–which, I think, causes the chaos. Walk-ins are on a first-come, first-serve basis–the noisy hordes were all parties waiting to be called. When our group finally met with our consultants, they were nice but frazzled and didn’t spend enough time withВ my sister to get a sense of her taste and pick gowns matching her aesthetic. Mal found a few to try on, but she had to share a mirror with other girls also trying on dresses. IВ can’t deal with environments like that, and I fully admit that I wasn’t much help (ok, no help) in finding dresses or giving positive feedback on any. The whole setting turned me off. (To be fair, I was there on a weekend morning. My sister and mom went on a weekday and said it was quieter and calmer.) 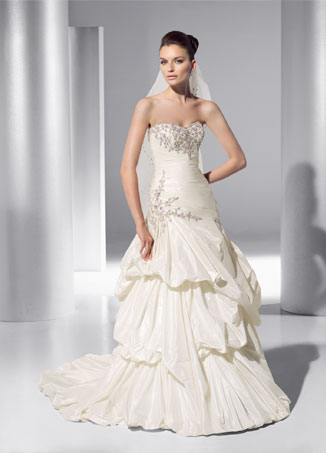 The Bad: Macy’s: I was unimpressed by our experience here, too. The salon, which is run by the labelВ Demetrios, was quiet and private, but felt a little dingy and dated. While we had a consultant assigned to us, we still had to go through the racks ourselves. (On the upside, Macy’s has a wide variety of stylish dresses, but not so many that it feels overwhelming.) Our consultant was friendly and personable, if a little too much for my taste. She kept calling my sister “all bones” and asking if she ate dinner–comments that would have sent me storming out in a huff, but Mal didn’t mind. She tried on a few dresses that looked nice, but nothing worthy of a second appointment. 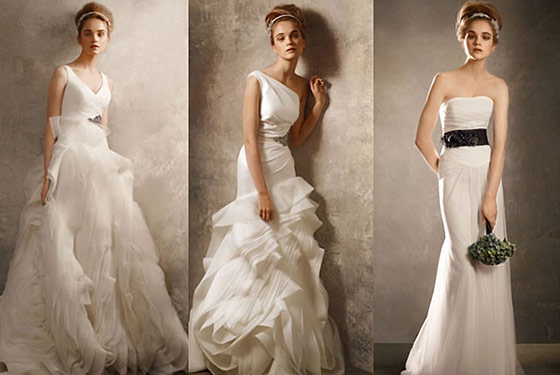 The Bad: David’s Bridal: I could go on a long rant about how bad this appointment was, but I’ll refrain. We went to see Vera Wang’s new (and extremely affordable) collection.В Upon arrival, however, we decided it wasn’t quite right for Mal–and neither was anything else in the store. Still, since we were there, she tried on a few dresses. Some were nice, though not even remote contenders. The worst part of our experience wasn’t the gowns, though. It was our consultant. In her defense, she was probably new (she had to ask another associate where her assigned dressing room was located–though that’s something she should know before giving appointments!). But some of the questions she asked us were just weird (like how many people were invited to the wedding, because less than 150 people is considered informal), and, not surprisingly, she pulled dresses that were not at all in the style of what my sister requested. Plus, David’s requires all brides-to-be to put on a new pair of their undergarments before trying on anything; I assume it’s a hygiene thing, since our consultant couldn’t explain the reason for the policy. Sigh.

The One?: The White Gown: I’ve already rhapsodized about my/our love for this boutique, which was the very first place we tried. And it might be telling because that’s where Mal may have found THE dress. We went back yesterday so Mal could take another look at the first gown she liked–but she also ended up trying on one other. It elicited the response she’d been waiting for. As she stepped into it, she felt like it could be The One. I cried. My mom got teary. And we all could see it fitting perfectly with the venue and season. Mal’s giving it a little time to be absolutely sure. But maybe the end of the dress quest is in sight!

Note: None of the gowns I’ve posted are in the running or necessarily considered, and I purposely haven’t gone into detail about dresses we liked or didn’t. Did you think I’d give away any of the surprise?

My sister, Mallory, is getting married in November and I couldnвЂ™t be more thrilled to be her MOH (maid-of-honor)! Since she’s moving to Maryland in April (sniff) she started a whirlwind few weeks of dress shopping before she leaves the state. 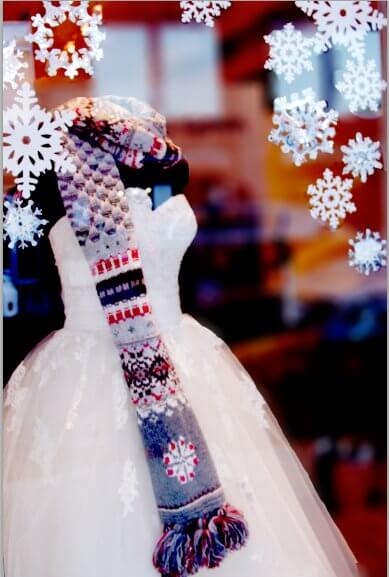 Last Wednesday, she had her first appointment at the White Gown in DUMBO. What a fantastic experience! The salon was quiet, private (I didn’t see any other brides-to-be) and had a hip, industrial vibe (thanks to its exposed brick walls, etc.) fitting of its location. Our sales consultant, Erica, was superb. She spoke to Mal about what she had in mind, looked at pictures she brought along, and picked out dresses complementary to her vision, personality and budget. She also knew the shop’s inventory inside and out and was extremely helpful in offering design and embellishment changes to align a gown more Mal’s style (like adding a sash in place of a pearl cluster, etc.). While Mal didn’t say yes to a dress that day, she did find one that’s in the running.

The next day we went to the Bridal Garden in the Flatiron District…and left after about 15 minutes. The boutique has a wonderful mission: Designers donate gowns that anyone can purchase at heavily discounted prices and all proceeds benefit education for NYC kids. The shopping experience isn’t for everyone, though, and it wasn’t for us. You have to purchase the sample gowns as they are–whether they’re stained, too big, too tight; you can’t order a new one in your size. While the Garden stocks all sizes, the vast majority of dresses are 8s and 10s (typical of samples), which is great if that’s your number, not so much if you’re larger or smaller. Plus, there are no consultants to help you out. You and your party have to go through the racks yourselves. This could be no problem if you know exactly what you want, but overwhelming if you’d like some professional input on how a dress could be altered or what other styles would look good (which is definitely my sister!).

Up next: J. Crew, Macy’s, David’s Bridal (for the new Vera Wang collection) and, of course, Kleinfeld! It’s going to be a busy few weeks!