Two weekends ago, when Mal, Peter and I ran the Long Branch Half Marathon and Relay, we stayed one night in the beach town. Between picking up our race packets, going to bed and waking up super-early (at 9:30 p.m. and 4 a.m., respectively!), we didn’t have a ton of time to explore. But what I did see convinced me that Long Branch is a great, quick weekend destination from NYC. It’s less than an hour and a half away, by car, and New Jersey Transit runs there, as well. While it was too cold to go to the beach, the sand and surf looked very clean and pretty. And though part of the boardwalk remains under construction, post-Sandy, a good stretch of it is still standing. (Which is all the most reason to visit the town and help in its recovery!)

Some highlights from our quick trip:

My parents, who came to cheer us on, booked our hotel for the weekend—and I’m glad they did. They В selected the stylish, boutiqueВ Bungalow Hotel, located a block from the beach. 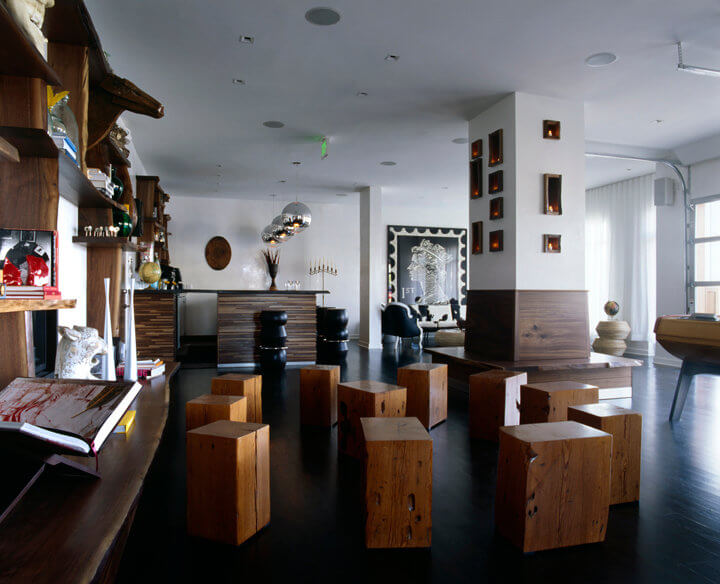 We couldn’t have asked for a better place to relax before the race. Mal, Peter and I shared a Hang Loose/Junior SuiteВ which, at 575 square feet, was nearly bigger than my apartment. I slept on the (surprisingly comfy) sofa bed and especially loved the gas fireplace. We cranked it up, and it gave our room a nice, cozy vibe. 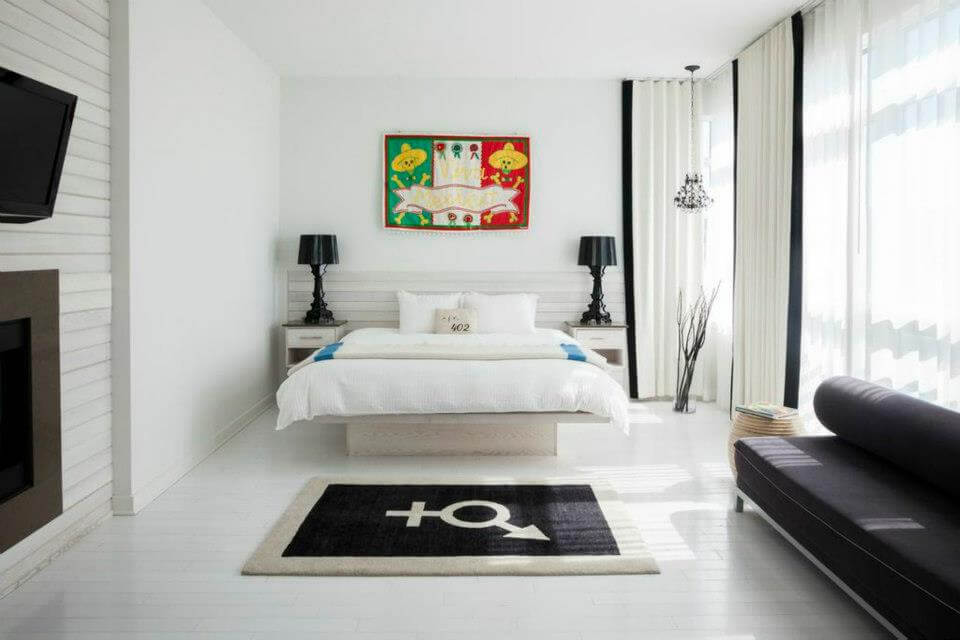 The suite also had a kitchen nook that proved to be a superb extra. At 4:30 a.m. on race morning, we gathered there to fuel up on cereal, bananas and Greek yogurt. 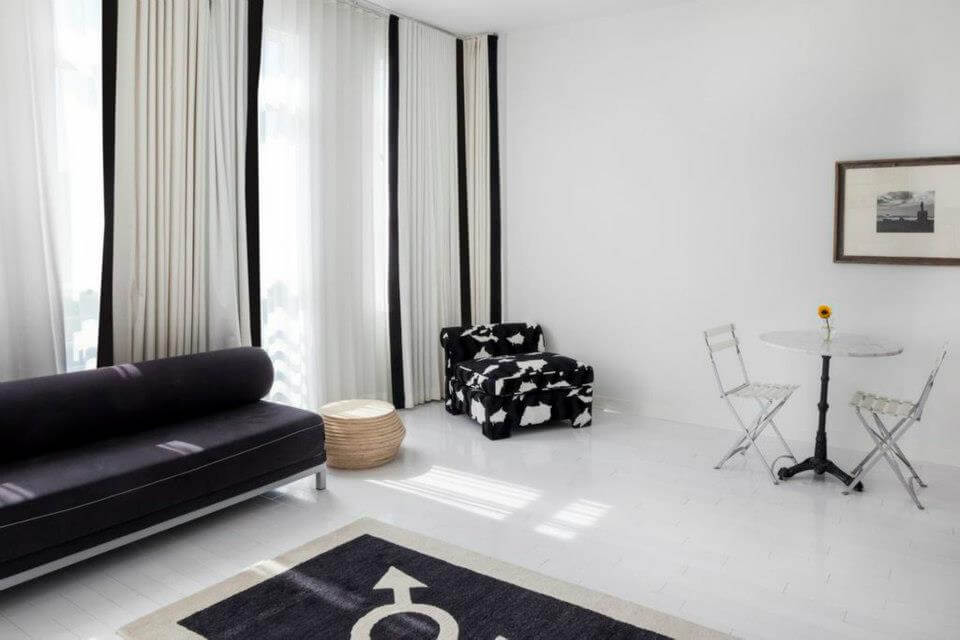 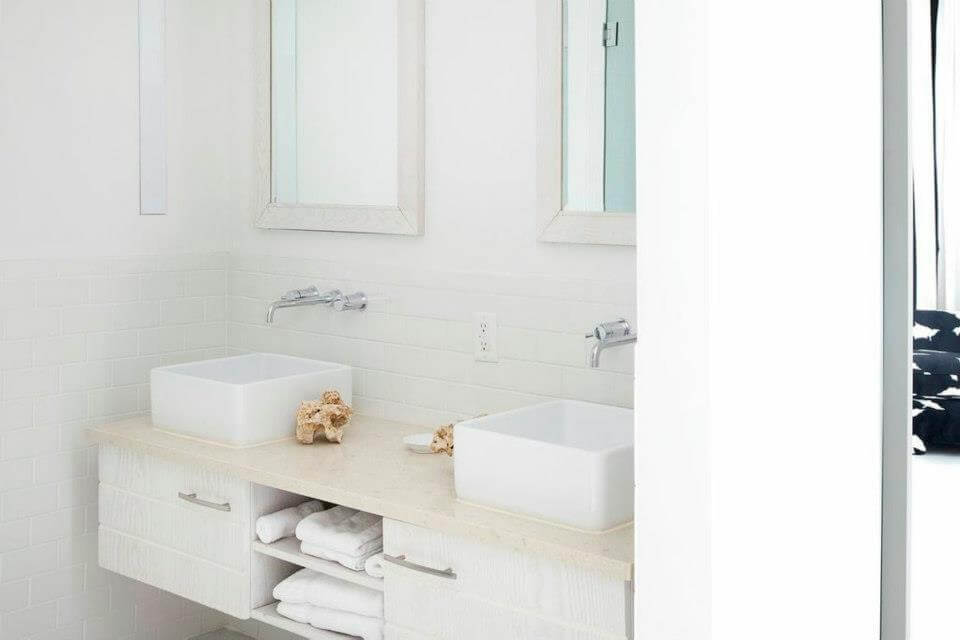 My parents were in a Lil’ Pipeline/1 Bedroom Suite across the hall. Their accommodation was even larger, with two bathrooms and a more spacious sitting area. After we finished the race, we all went back to there to inhale doughnuts and celebrate our finish times.

Pier Village is a newish (opened in 2005) shopping/dining/living complex on the Long Branch boardwalk. It definitely has a commercial feel and is a sign of how the area has made itself more attractive to tourism. But I won’t deny how nice it is to have so many eating options right by the beach. (As opposed to boardwalk stretches in other shore towns where you’d be hard pressed to find anything other than fast food.)

The Turning Point is a New Jersey chainlet that specializes in breakfast and has an outpost in Pier Village. It clearly has a Long Branch following! After checking in to the Bungalow, we headed there for a bite and were told there was an hour wait inside theВ restaurant. Luckily, we were able to be seated right away, outside. Even though I would have liked to have been a tad warmer, I was glad to be out of the city, breathing beach air.

The service was excellent, as was my Popeye Skillet. The hearty dish contained spinach, eggs and cheese—and some of the best breakfast potatoes I’ve ever had.

You can’t tackle a race without having pasta the night before, right? We ate our pre-run dinner at Ciao Ristorante, a small, family-run Italian place with a strict reservation policy. (We saw them turn away several parties who hadn’t called in advance.) The atmosphere was homey—it seemed like all the regulars knew the servers and the chef.

Everything we ordered was delicious. The buffalo mozzarella and tomato appetizer was very fresh, and my scampi came with huge, perfectly cooked shrimp. I did have a bit of food envy when I tasted my mom’s pollo bruschetta, though. The chicken had nice, crispy breading and the tomato salad was bright and tasty. I also couldn’t resist getting the banana bread pudding for dessert. (Also fantastic, by the way.) I figured I’d run off the calories! 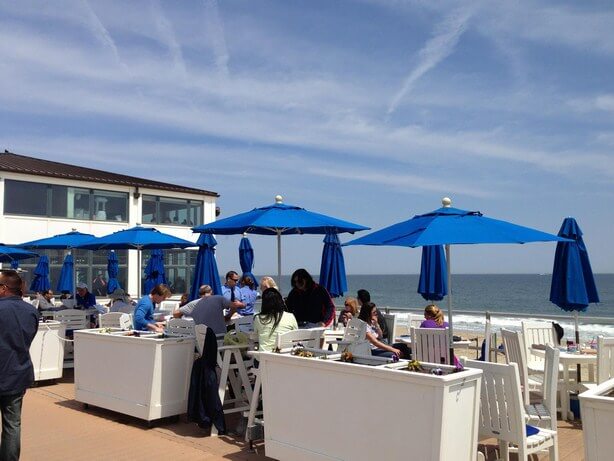 After showering and celebrating, post-race, Mal, Peter and I headed back to the boardwalk to cheer on the marathoners as they approached the finish line. (We can do that for hours—it’s so much fun to encourage people as they’re completing such a physical feat!) It was nice and warm in the sun, and after a while, I only wanted one more thing: a beer in my hand. So we strolled to the outdoor section of McLoone’s Pier House, which wasВ perfectlyВ situated with the beach on one side and the runners on the other.

If only it was 20 degrees warmer—then it would have been perfect. The ocean breeze was chilly, but I was still psyched to have a beer and quesadilla by the beach. It was the perfect way to top off this year’s running weekend—and it left me excited for all the fun that lies ahead, this summer! 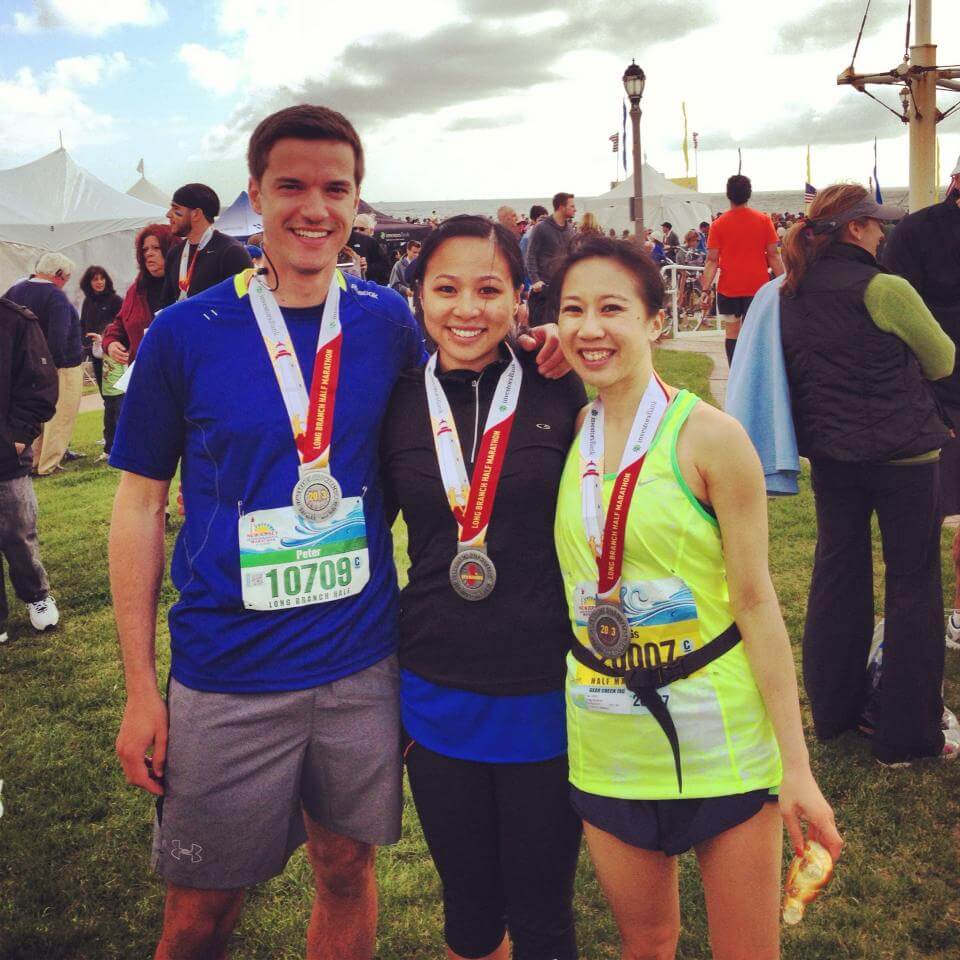 Back from our spring running weekend of 2013—and I’d definitely say it was a success! Mal, Peter and I had an awesome time racing down the Jersey Shore, early Sunday morning.

Peter ran theВ Long Branch Half MarathonВ and Mal and I teamed up for theВ Half Marathon Relay; both events went simultaneously along one course, which wound throughВ Oceanport, Monmouth Beach and Long Branch. (The headlining event, the New Jersey Marathon, started about an hour later and went along the same route—just with 13.1 extra miles tacked on midway!)

This was my first relay, which made for an exciting but slightly nerve-racking experience, due to all the logistics. Here’s how it worked: Mal and I decided that she’d run the first leg (6.9 miles) and I’d run the second (6.2 miles). Early on Sunday morning (5:15 a.m.!), Mal, Peter and I went to the stating point at Monmouth Park. When it got close to race time, Mal and Peter headed to their corrals atВ starting line. Meanwhile, other second leg runners and I took a shuttle bus to the transition point, several miles away.

Once there, a volunteer explained the runner hand-off. A row of metal barriers divided the street down the middle. The half marathoners would be on the far side of the barriers. The first leg relayers would come down the section next to the sidewalk where we were gathered.В A volunteer farther down the course would radio in the last three digits of the approaching relay runner’s bib number. Then, the volunteer near us would call out that number and that runner would get on deck in preparation for his/her partner’s arrival. Once the two met, runner #1 would hand over the time chip belt, and runner #2 would be off!

While I waited for Mal, I tried to stay warm (it was freezing!), stretch and talk to my parents, who’d met me there. And not be too nervous. But it was also very exciting. All of us second leggers cheered as the super-fast half marathoners and relay runners came through the course. Soon after the stream of runners grew from a trickle to a pack, we caught Peter going by, looking as fresh-faced and smiley as this guy.

I knew Mal would be there shortly, so I took off my sweats—and all of a sudden, my mom shouted that she saw Mal! A few other relayers were arriving at the same time, so our number didn’t get called. Feeling frazzled, I ran over to Mal and fumbled to grab the belt from her and shove my headphones in my ears. The belt cinch snapped off as I tried to put it on, but I took off running while knotting it around my waist.

I felt pretty horrible for the entire run. I was freezing from standing outside for a good part of the morning, and it was a shock to run while so cold. Also, I’m not used to working out in the morning. And I’d been up since 4 a.m. Not my normal wake-up time.

But I tried to maintain a consistent clip because I didn’t want to drag us down. Mal and I had set a goal to finish in 1:55—and she’d completed her leg at that pace. I wasn’t going to be the reason we didn’t achieve our time! Luckily, I was among runners who were sticking to what felt like my goal pace, so I held steady with them.

I ran on, as the course meandered through various residential streets. Each time I completed a mile and saw a time clock, I vowed to try to reach the next one in 8-9 minutes. Finally, I was on the last mile, along the beach. Just seeing the ocean energized me, though it was sad to note where Sandy had destroyed part of the boardwalk.

As I approached the finish line, I did not feel great, like I did last year. I felt like I was going to die. (This year, my mom later told me, I definitely did not look like I was taking a walk in the park!) But after crossing the finish line, getting our medals, and finding Mal, I almost teared up with joy—I came in at 1:56:58, and knew that our chip time would put us around our goal.

We celebrated with doughnuts back at our hotel, then went out to cheer on the marathoners who were finishing their (much longer) race on the boardwalk. I was completely zonked for the rest of the day but it was so worth it! It’s funny; I’ve run a half marathon and a faster 10K before, but this was probably the most gratifying race I’ve completed. I think it was the team aspect of it—not just working toward my own goal, but Mal’s as well.

We’re already looking for another relay to do this year. Anyone up for Ragnar?!

(The photo above is the only one I took at the race! I even ran with my phone because I was planning to take pics while waiting for my turn to run, but I didn’t snap a single one. I suppose sometimes you just have to live in the moment!)