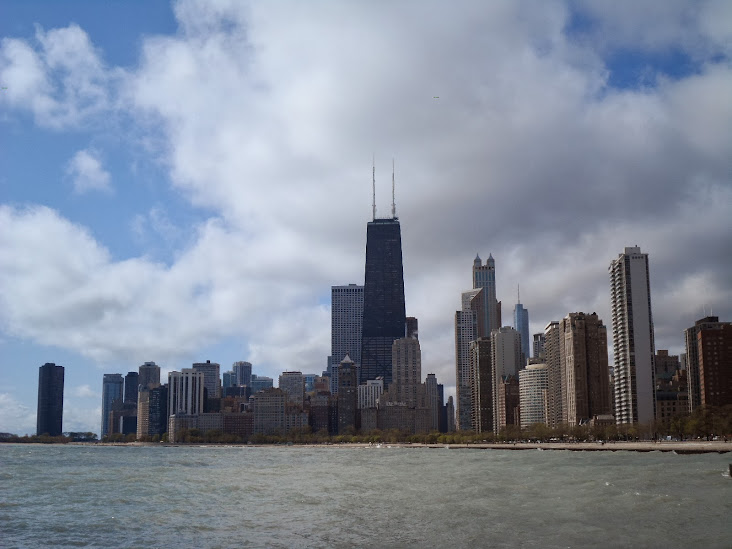 Last weekend, I went to Chicago to visit my good friend Lindsay, who moved there a few years ago. Even though I got in late Friday night and left Sunday afternoon, I still managed to see/do/eat a ton. Lindsay was a fabulous host and planned a great weekend–we really packed in as much as we could for my very first trip to the Windy City!

Lindsay lives at the intersection of two great neighborhoods–Old Town and Gold Coast–and is just a few minutes from the lake. So on Saturday morning, I woke up early and went for a run along the Lake Trail. It was chilly but sunny and I was excited to see so many other runners out. I thought Boston was a big running city, but it’s got nothing on Chicago–I’ve never seen so many runners out at once.

I planned to go for a short jog, but ended up running about 5 miles from North Avenue to a little past Belmont Harbor. The scenery was so pretty that I didn’t want to stop, not even to take pictures. I did manage to snap these few, though: 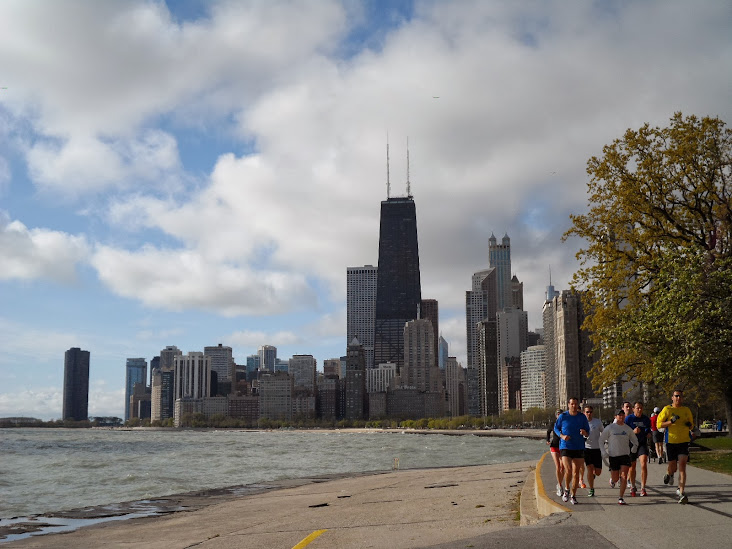 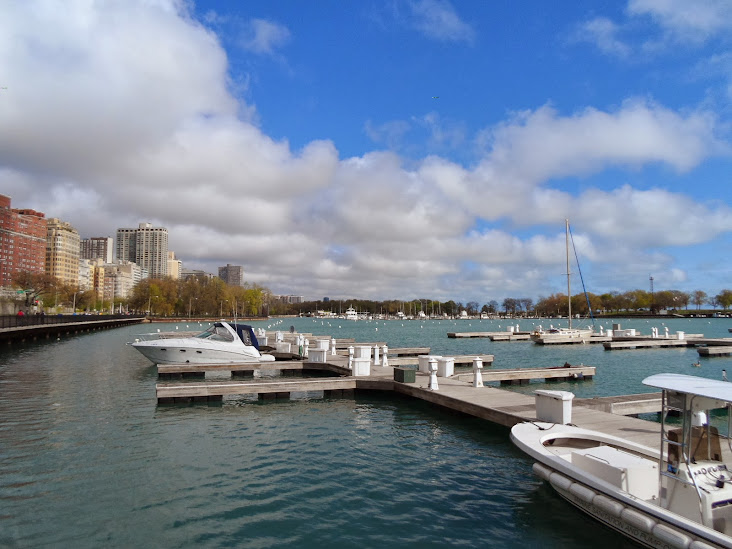 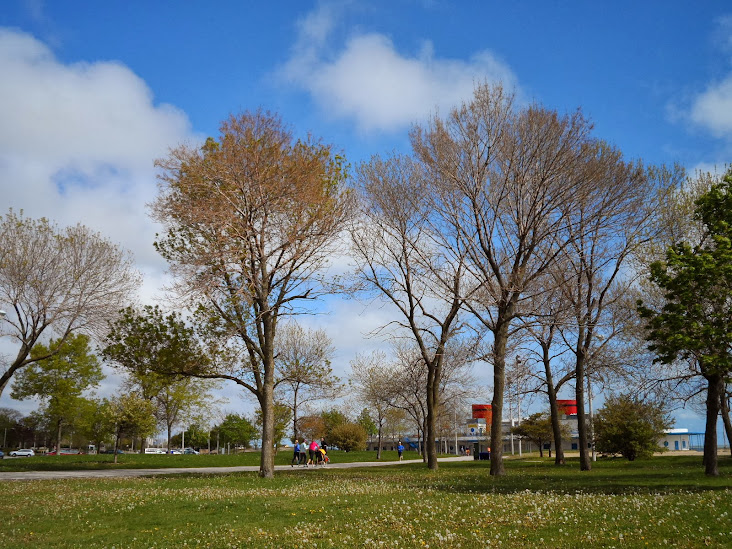 Afterwards, Lindsay and I walked south through the Gold Coast. Her neighborhood is so pretty–lots of stately old houses, leafy green trees and tulips blooming along the sidewalk. 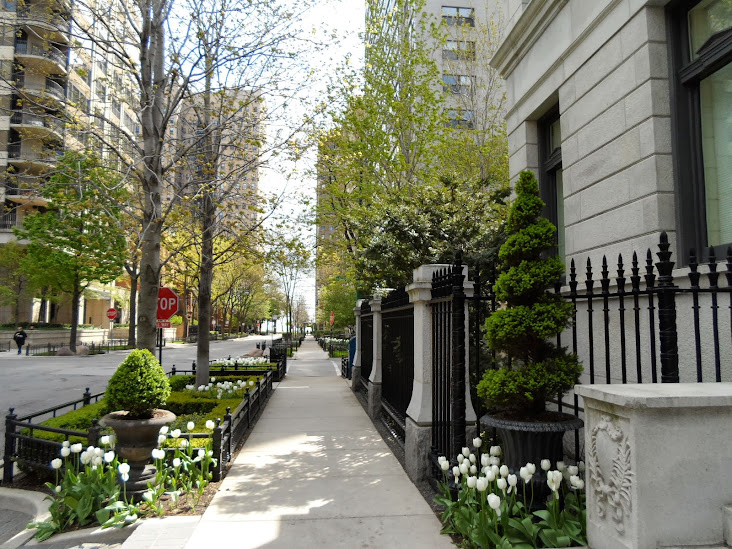 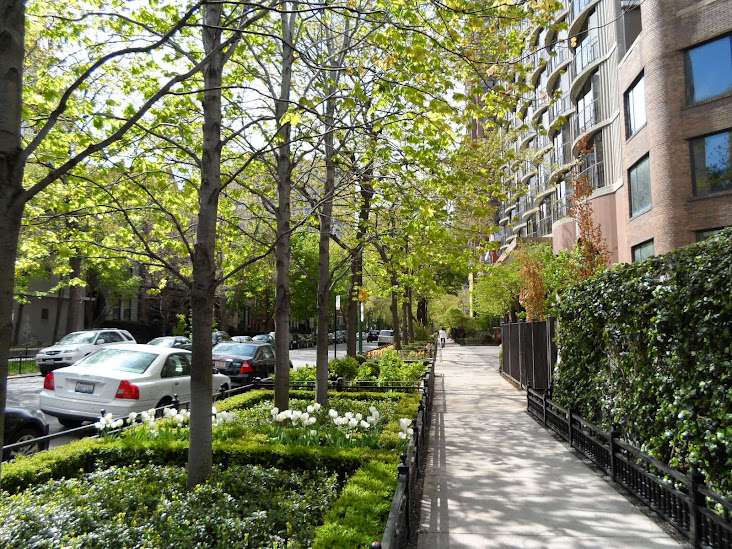 We made our way to North Michigan Avenue, which is basically Chicago’s Fifth Avenue. Once we reached the downtown area, Lindsay headed back and I continued on. 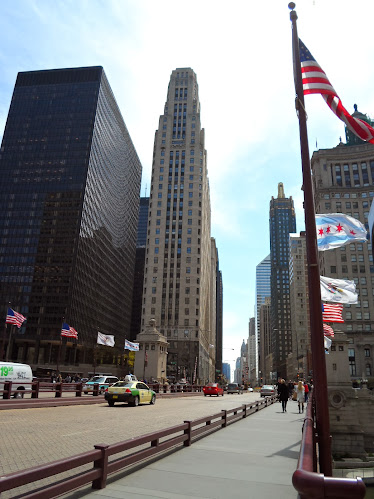 Before going to Millennium Park, I inhaled a few tacos at Frontera Fresco (I figured I might as well try Rick Bayless’ Macy’s outpost since I didn’t have a res at the actualВ Frontera!) and made a cupcake pitstop at the super-cute Sugar Bliss Cake Boutique for a red velvet fix. (Yum!)В 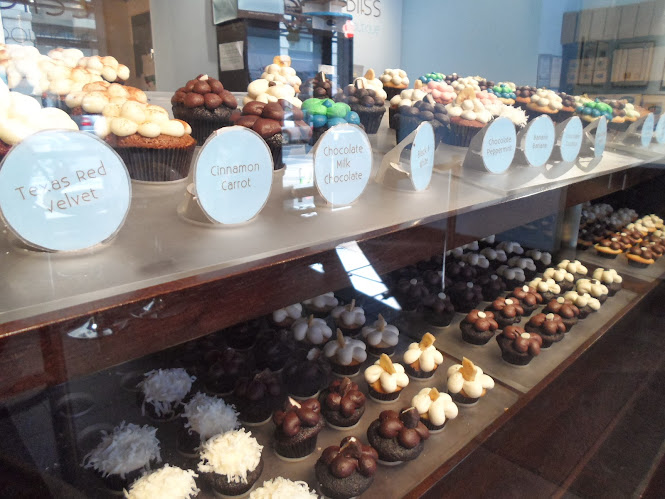 Millennium Park is just as cool as it looks in photos. Thanks to the nice weather, lots of other people were out photographing themselves at Cloud Gate… 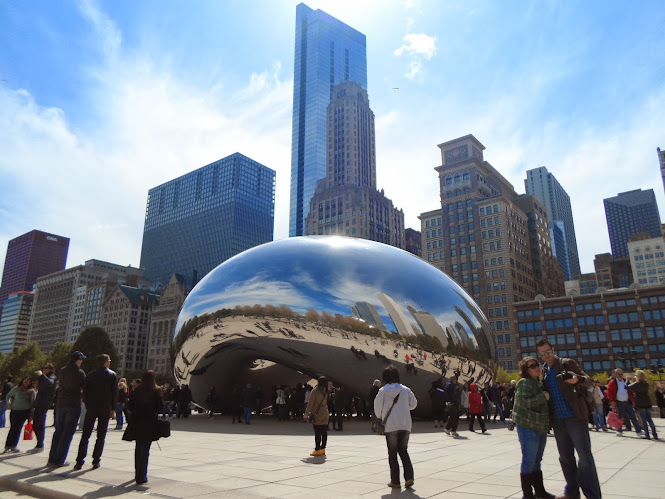 …and scoping out the animated Crowd Fountain faces. 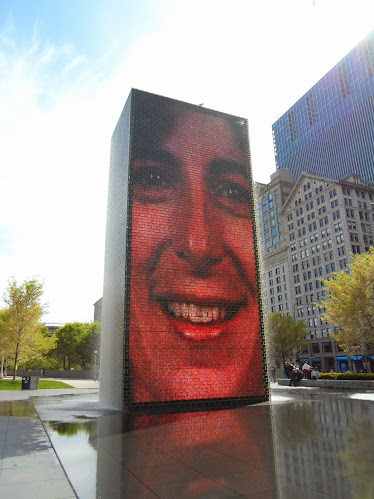 I spent some time admiring the tulips (they were blooming all over the city!)… 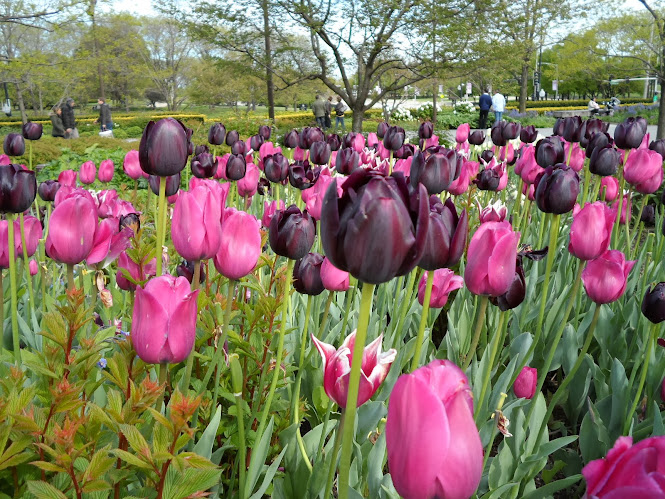 …and chillaxin’ in the Lurie Garden. 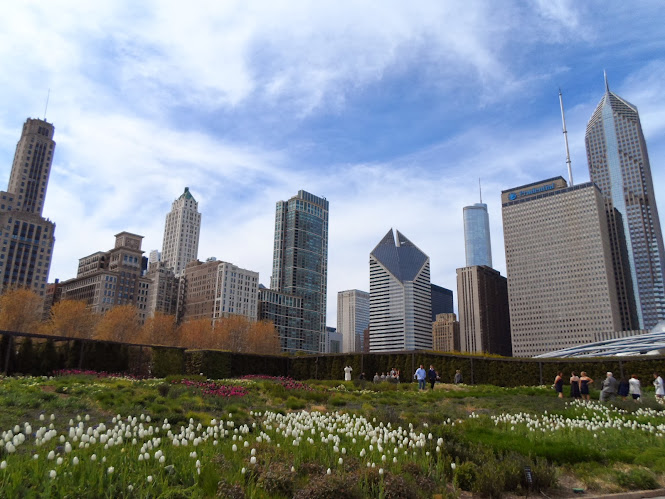 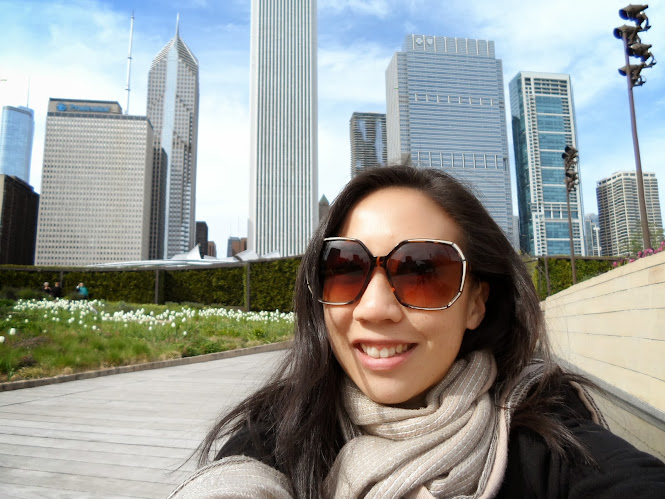 Then I headed into the Art Institute to explore the gorgeous modern wing and some special exhibits. 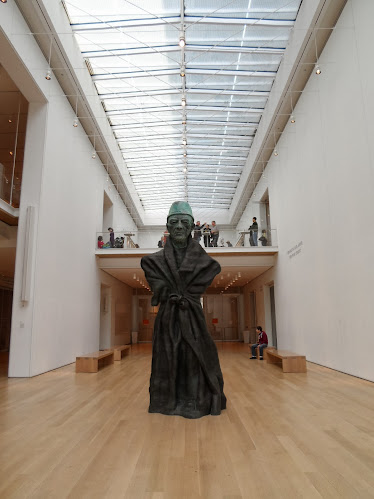 I met Lindsay in the West Loop for dinner. The industrial area has a hip, up-and-coming vibe that kind of reminds me of Williamsburg–except without swarms of hipsters. We had dinner at The Publican, a fairly new restaurant that focuses on beer, pork and seafood. (Um, how can you go wrong with that?) The space was designed with a beer hall in mind, so there’s lots of natural wood and large, communal tables. 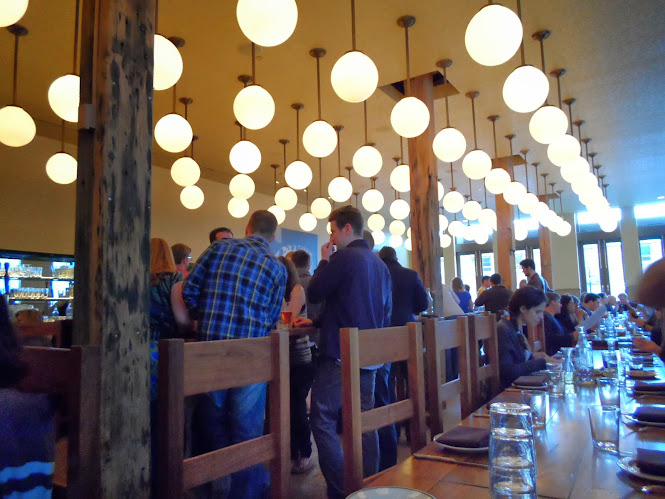 We ordered a few small plates. My favorite was squid with farro, oranges, cheese and chorizo vinaigrette. 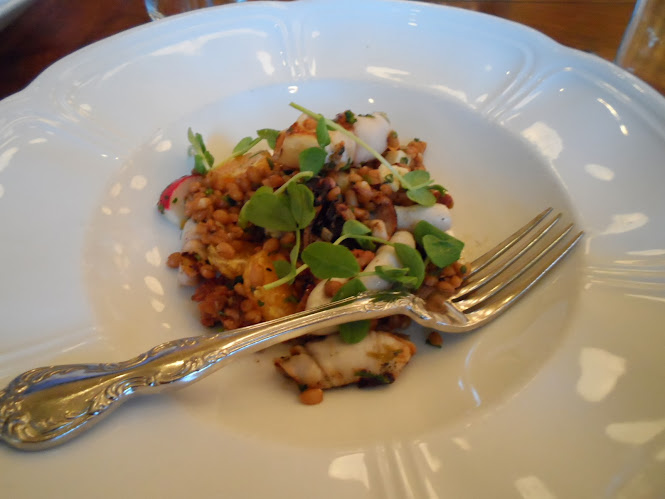 We topped off the evening with drinks at Maude’s, a cocktail bar with a retro vibe. (Slightly blurry photo–I’m still getting used to using my new camera in low light!) 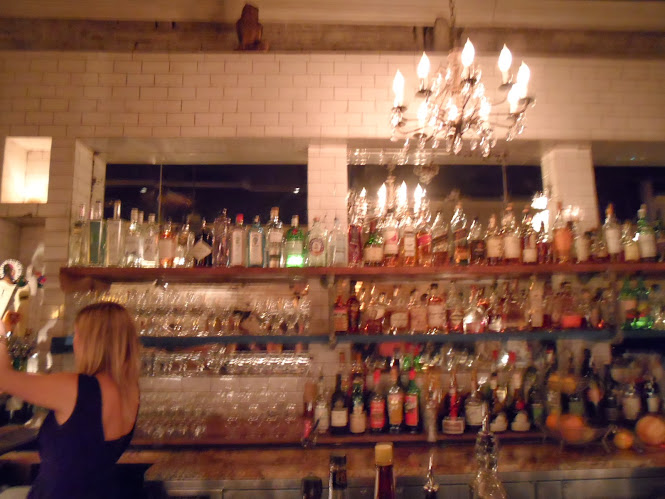 Next morning, we walked through Lincoln Park to Floriole Bakery and Cafe, one of Lindsay’s favorire daytime spots. I can certainly see why she frequents it–I’m already planning to try to replicate the bacon and arugula sandwich I had there. 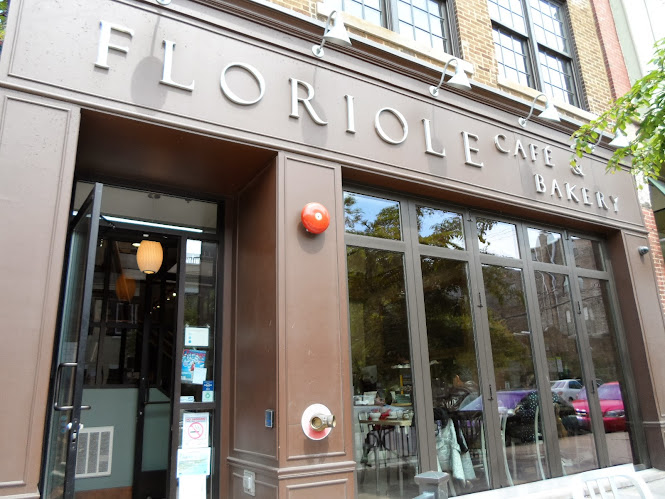 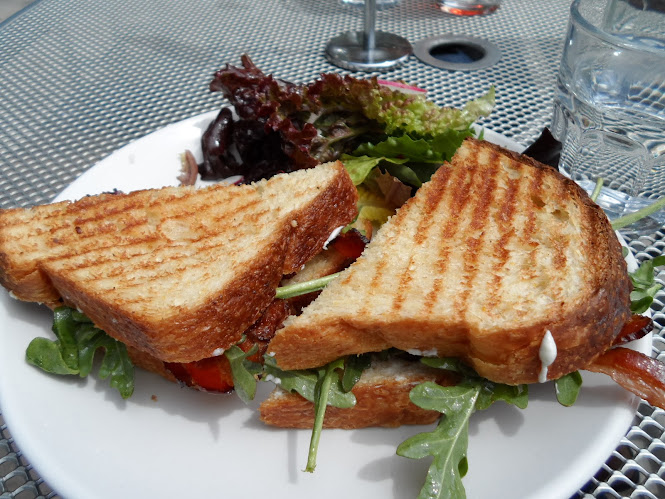 On the way back to the Gold Coast, we stopped at the Lincoln Park Nature Boardwalk. Check out the amazing view of the skyline!В 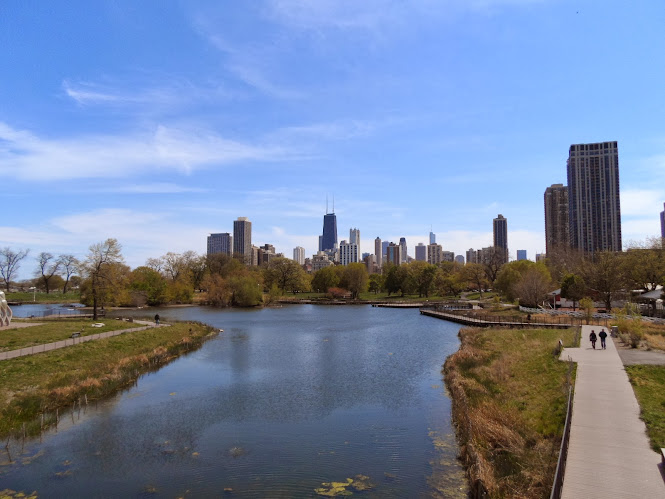 Of course I couldn’t leave Chicago without having deep dish. So before I boarded the bus for the airport, Lindsay and I had an early dinner at Lou Malnati’s. The local chain’s Gold Coast location has a nice seating area with comfy chairs looking out onto the street and we were lucky to snag window seats. (Especially since all the pies are made to order and take at least a half hour.)

The pizza was exactly how I’d hoped it would be–thick and bready with a crispy crust and a fresh tomato sauce. I inhaled two slices. (And now that I’m writing this, I wish there was a good deep dish place in NYC!) 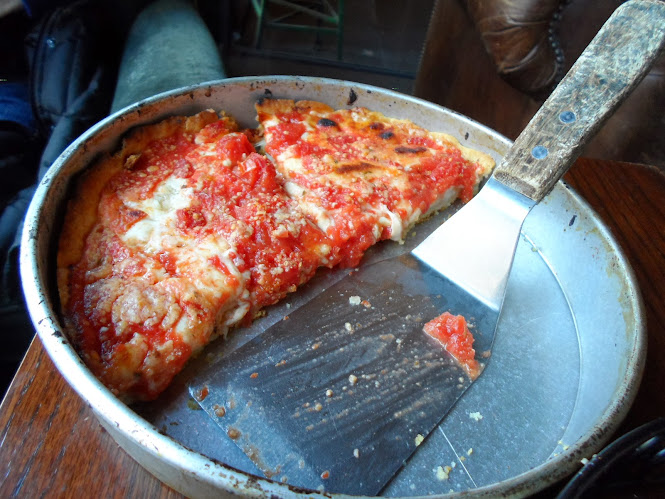 It’s a good thing I had that pizza, because my flight home was a bit of a disaster. It was delayed, due to bad weather in NYC. And when the pilot attempted to land at LGA, the wind made him overshoot the runway–which we skimmed before taking off again so we “didn’t end up in the water.” We ended up flying to Philly, refueling there, then turning around and flying back to LGA. I got home at 3 a.m.

But that was the only dark spot on the weekend. Thanks again, Linds, for being such an awesome host–can’t wait for my next trip out there or your next jaunt out east!

Tonight, I’m headed to Chicago for the first time ever! (I know–it amazes me, too, to think that I’ve been to places like Bolivia and China but not Chicago, Los Angeles or a slew of other U.S. cities. Or Canada for that matter.)

I’m looking forward to stuffing myself on deep dish pizza, checking out Millennium Park and the Art Institute, having dinner here and wandering around different neighborhoods. (Andersonville sounds particularly cool!)

But I’m even more excited to see my good friend, Lindsay, who moved there years ago and whom I haven’t seen in ages.

Got any recommendations about what I should see and do? Let me know!

(And maybe I’ll finally get this song out of my head–it tends to play on a continuous loop every time I think about Chicago.)