A few years ago, on the cusp of my 25th birthday, I decided that I would celebrate by going away for a week. At the time, I was constantly stressed about work. It was so bad that I didn’t think I could enjoy my milestone birthday unless I was far away from email and cell phone reception. So Mal and I spent a week in Costa Rica. We hiked around Arenal Volcano, Tenorio National Park and Monteverde Cloud Forest, then rang in my actual birthday in the surf town of Montezuma. We had such a great time that I decided I needed to take a birthday vacation every year.

For my 26th, I went to Cartagena, Colombia. For my 28th, Negril, Jamaica with my family. And last year, for my 29th, Mal and I spent a week in Panama.

I’m not going on a big trip this year; I didn’t want to dive into my new job, then take a chunk of time off. (Also why I didn’t go away for my 27th.) But since I never posted pics from last year’s vacation, I figured now would be a good time to look back at the highlights of what I was doing on this week, exactly one year ago. 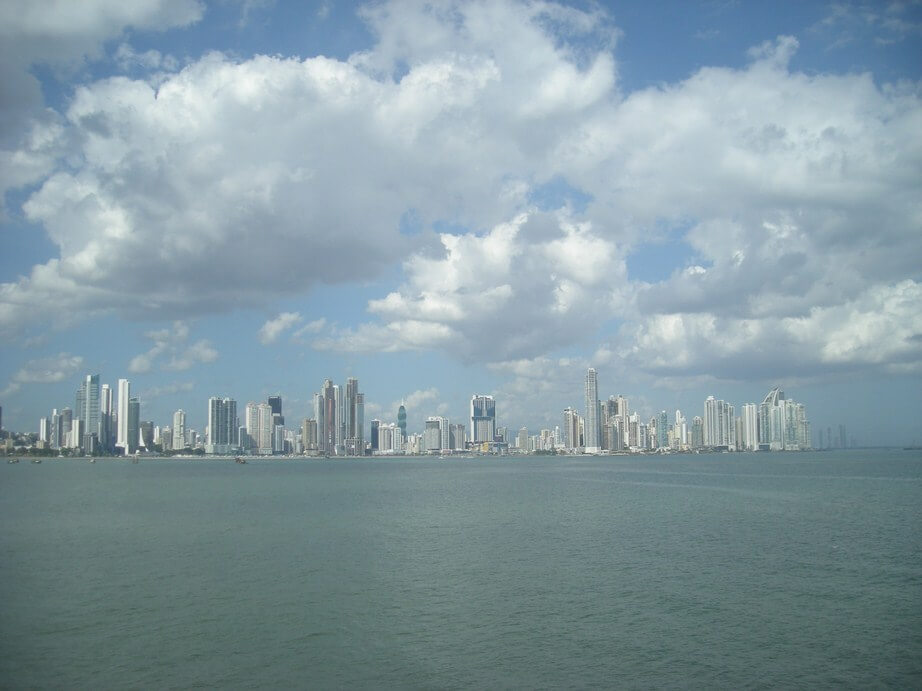 Mal and I started our trip in Panama City. It’s a big metropolis with an impressive skyline, but, due to time, we didn’t explore it much. The first thing we did was take a cab out of the city to Soberania National Park, just 30 minutes away.

Soberania is a popular place for birders; more than 525 species live in the park, and Pipeline Road is the most popular trail for glimpsing them. (Funny story: At the time, my Spanish was way worse, and I told one of the rangers I wanted to see the “aviones” on Pipeline Road. “Aviones” means airplanes—“aves” is the word for “birds”—which explained the confusion that ensued!)

Mal and I spent an hour on Pipeline Road. It proved to be a great place to see wildlife. Despite our hopeless animal-spotting skills, we were able to see many different birds and animals—including a family of peccaries that ran by us—without a guide or other people to point them out. 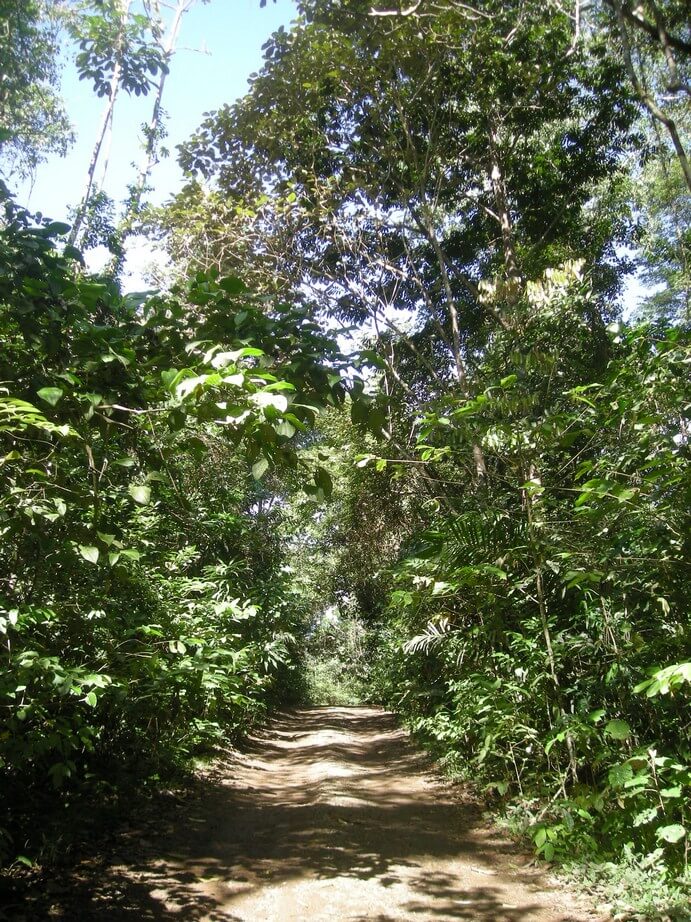 From there, we went to the Panama Canal. To be honest, neither Mal nor I were jumping out of our seats to do this, but we figured we couldn’t visit the country without seeing the canal. (Before and after we went, that was the first thing anyone asked us!) That morning, we’d called ahead to see when the tall ships would be coming through, and timed our visit accordingly. 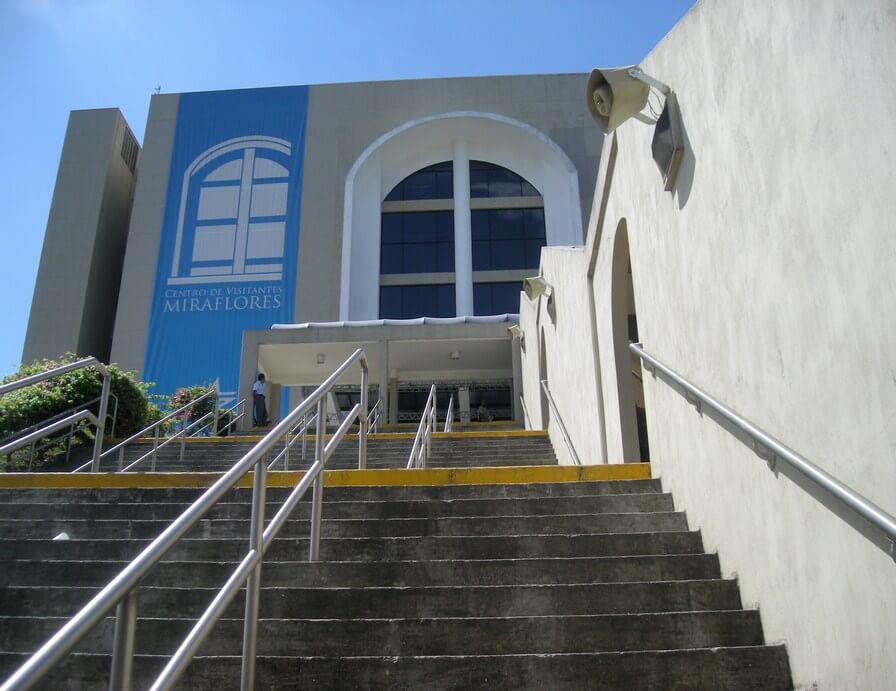 Apparently, so did everyone else. The visitor’s center and viewing deck at the Miraflores Locks were packed. Packed! For some reason, I didn’t think that many people would be there, but it seemed like all of Panama was. We could barely find a place to stand. Despite my initial indifference about the canal, I was fascinated when I actually learned how it works: AВ system of locks (basically water elevators for boats) lifts ships from sea level to the level of Gatun Lake, in the middle of the country, and then back down to sea level, allowing them to go from the Atlantic to the Pacific, and vice versa.В The canal opened in 1914, and more than a million ships have passed through.

It was actually really cool to see the locks open… …and watch the ships come through. (And especially fun to see the crew members waving at us gawkers.) 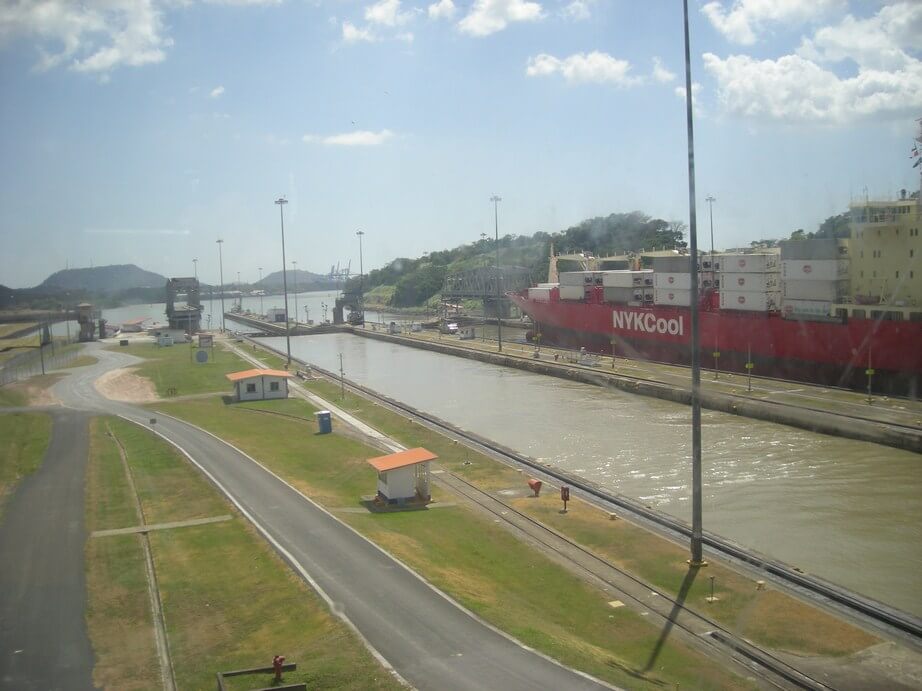 Another view of a ship coming through the locks

After that, we headed to Casco Viejo, the historic part of the city. Mal and I walked up and down the pretty streets…. 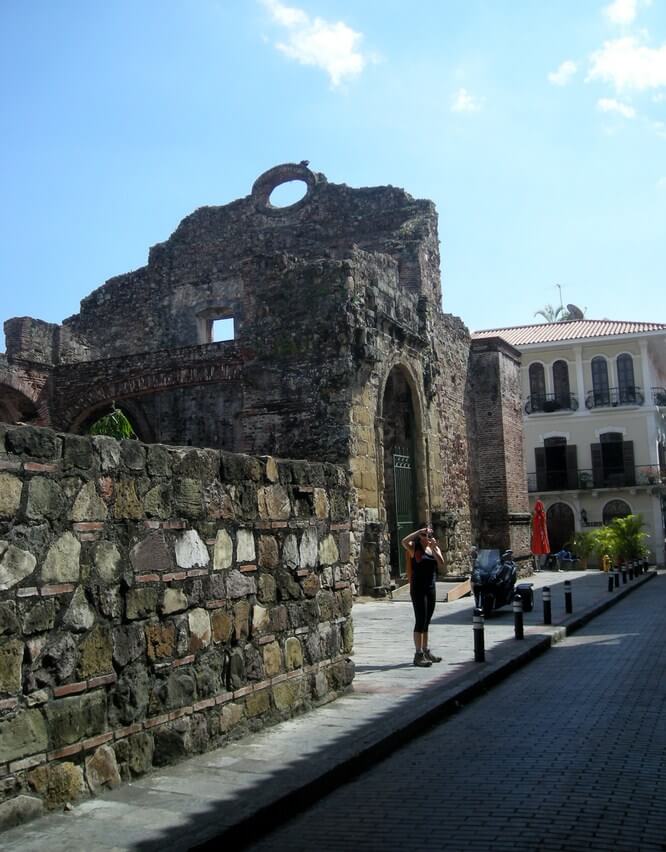 …until we ended up at Plaza Francia, which leads to a waterfront promenade. 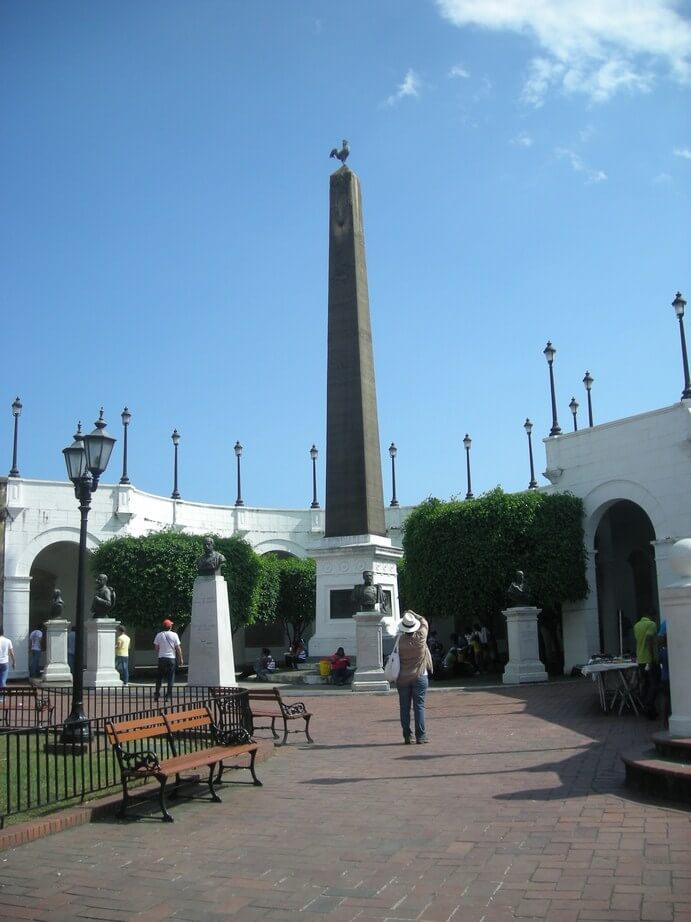 After walking the promenade, we were pretty tired so we headed back to our hotel for some pre-dinner R&R! (We stayed at the Four Points Sheraton, which was fine, but nothing special.) That night, we had dinner at Market, a really good steakhouse that would have been right at home in Miami. 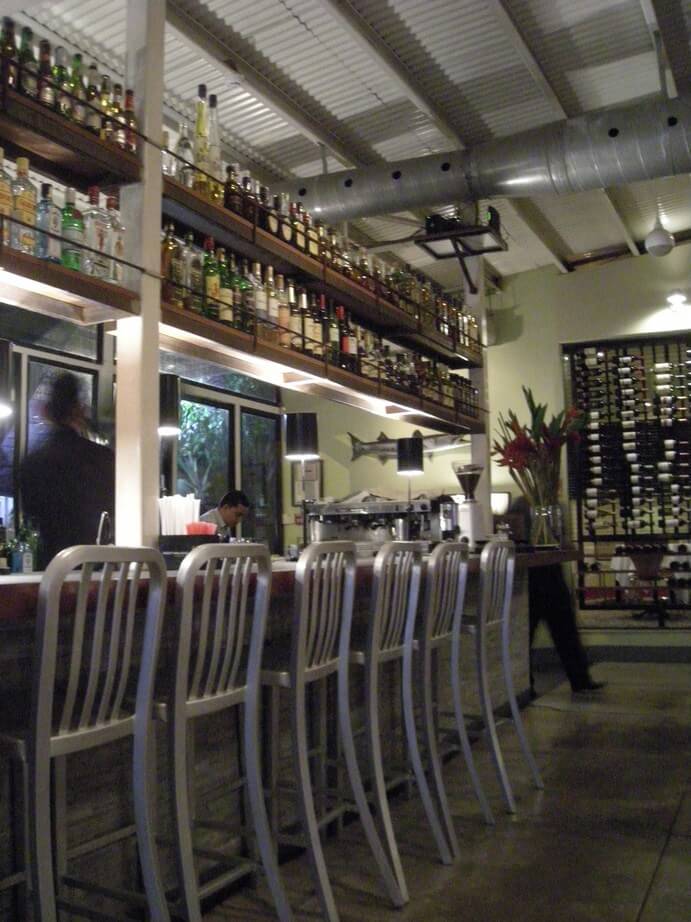 The next morning, we hopped a quick flight to Bocas del Toro, an archipelago of islands off the northeastern coast—and home to some of the country’s prettiest beaches. В The main island, Isla Colon, is tiny (just 24 square miles) andВ a popular destination for surfers—Mal and I were practically the only people without surfboards on our flight! Accordingly,В its main hub, Bocas Town, has a super-chill vibe during the day but turns into party central at night. 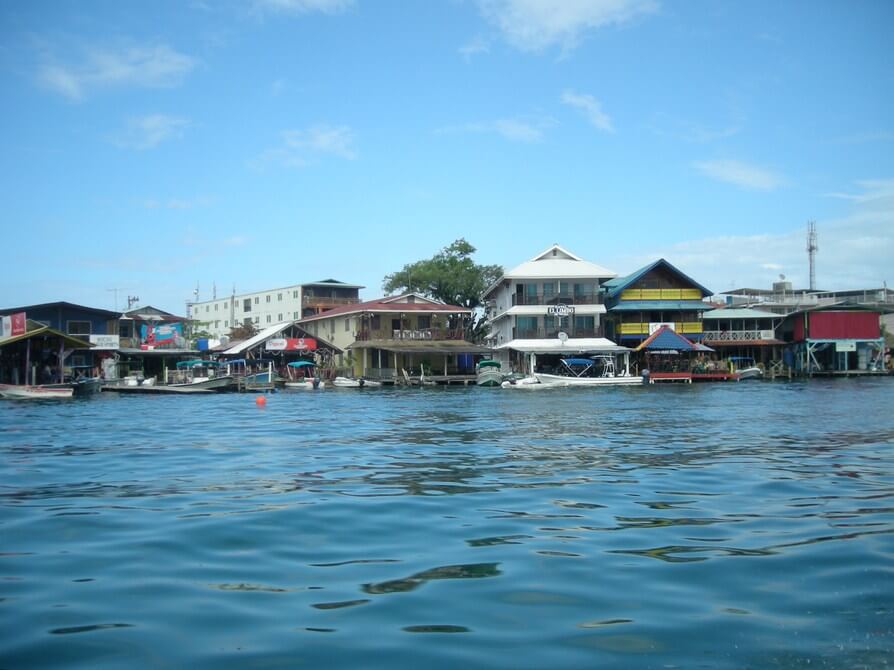 Luckily, you can escape all that by taking a water taxi (i.e. weathered little speed boat) to one of the smaller islands. 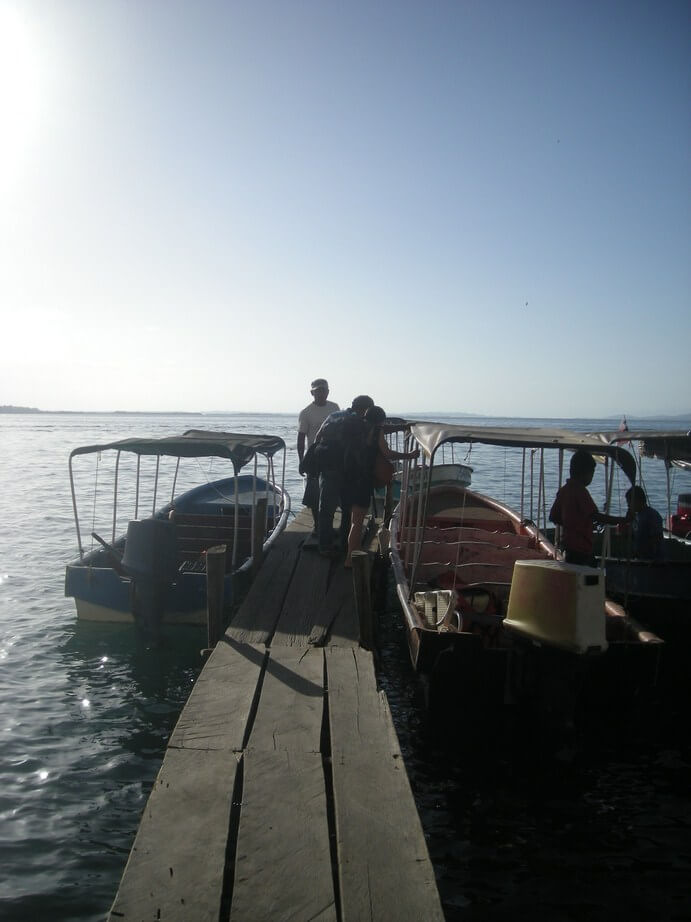 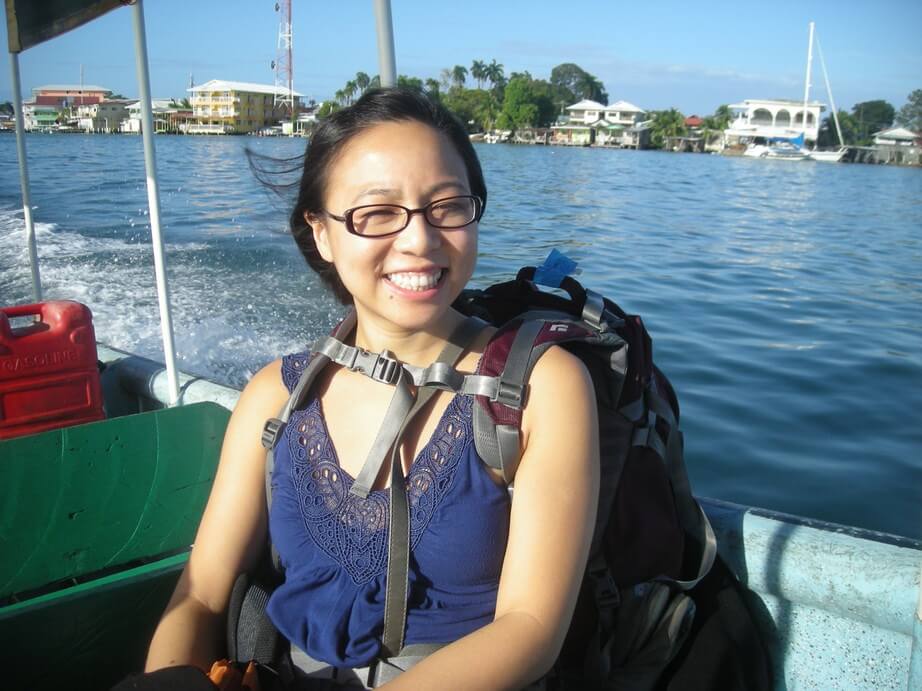 Mal on the water taxi

I wanted to spend a few nights at La Loma, a jungle lodge and chocolate farm, on Isla Bastimentos, but they only had one night open. So we spent our first night on Isla Carenero, at Careening Cay, an American expat-run complex of pastel-colored cabins (some over the water) at very reasonable prices. 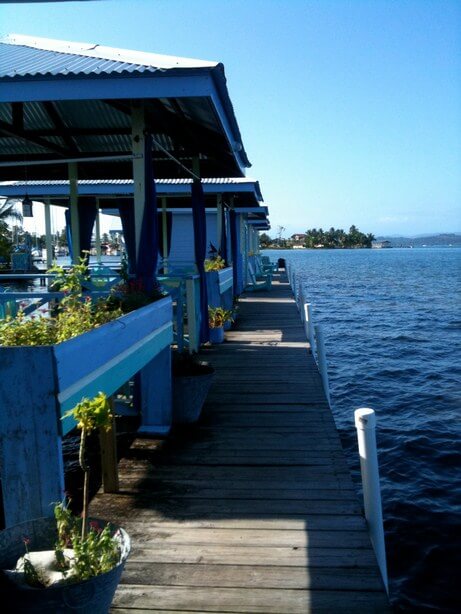 After checking in, we took a bumpy water taxi to Red Frog Beach on Isla Bastimentos…. …and spent a few glorious hours in the sun. We didn’t go swimming, though. Riptides are notoriously bad in Bocas and we could actually see them sweeping out to sea all day. But the clean sand and green surroundings more than made up for it! The next day, we went to Cayos Zapatillas, two tiny islands off the eastern tip of Bastimentos. They’re a bit far (about 45 minutes from Bocas Town) but lots of people make the trip for the gorgeous beaches. As a result, water taxi operators vie for the tourist dollars—and can be a little sketchy. Once Mal and I were on the boat, we found out that they had basically told all the passengers different prices and times that we’d return—which led to bickering, until a price and return time were agreed upon by everyone.

Nevertheless, I was glad we went! The beaches were exactly how I like them—-clean, white sand with clear water on one side, wild vegetation on the other. Well worth the trip, even on an overcast day! 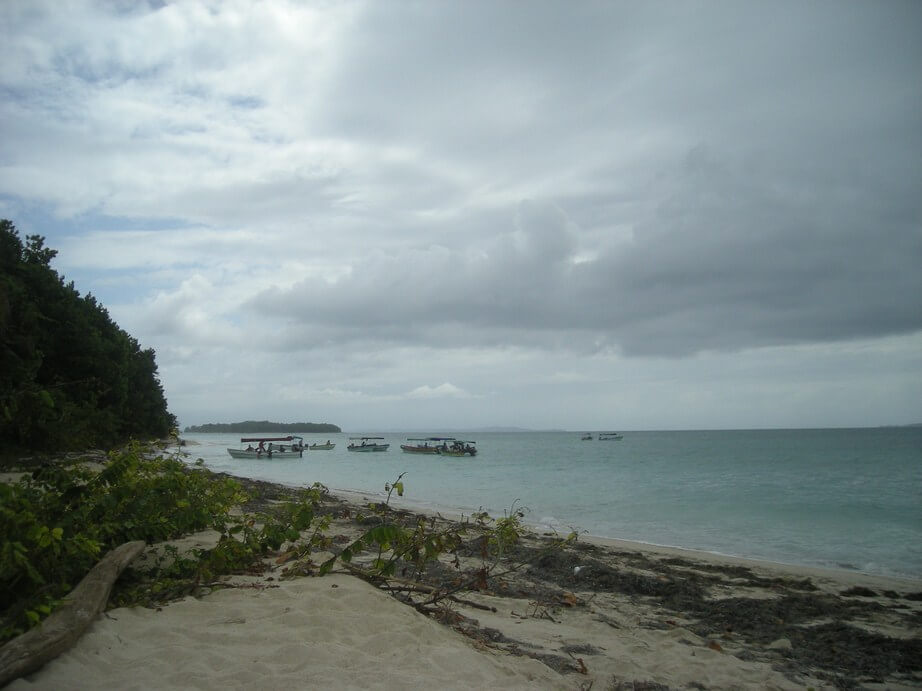 Later that afternoon, we checked out of Careening Cay, and Henry, the owner of La Loma, picked us up—by boat, of course—and took us to his amazing place on another part of Bastimentos. And that’s where my favorite part of the trip began.

La Loma is my idea of paradise. Or, I should say, eco-paradise, since Henry and his wife, Margaret, implement a slew of sustainable practices, such as utilizing solar energy, reclaimed wood and collected rainwater, and cooking with ingredients like organic chocolate from their farm and veggies from their gardens.В I’ve yet to stay in a place that’s more one with nature.

To get there, you ride through thickets of mangroves until you reach a small dock.В From there, you follow a walkway cut through the vegetation until you reach the wooden main building where there’s a kitchen and table for communal meals. Refreshingly, it has so few walls that you feel like you’re still in the jungle. The bar/kitchen at La Loma

Getting to your “rancho” (i.e. cabin) is literally a hike; the 8-minute uphill hike was the most exercise Mal and I got all week! The trek is worth the effort, though. Each “rancho” is, like the main building, constructed from wood and virtually wall-less. And the views? Amazing. “Inside” a La Loma rancho Hammocks in the rancho The view from our cabin at La Loma

What most amazed me was that Henry and Margaret conceived and built La Loma, themselves, years ago. I have no idea how they just gazed up at a jungly hillside and envisioned a place like that.

They are, besides being pretty genius, also two of the loveliest people I’ve ever met. They host the nightly communal dinners and create an atmosphere so homey, that I felt like I was eating amongst old friends. (Our companions actually included honeymooners who’d just gotten married in Bocas, and two late-middle aged couples, including one who returned to La Loma every year.) The food, was also, hands down, the best we had on the trip. I was glad I could at least wake up and spend the morning of my birthday at La Loma, but sad when we had to depart in early afternoon. Mal and I took a water taxi to Almirante and headed to Boquete, a pretty mountain town that’s big with American ex-pats.

Here’s where the trip went downhill. A taxi from Almirante to Boquete would have cost $120. We decided to save money by taking the bus. Big mistake. The bus—or, should I say, “bus”—was really a tiny van with seats the size of the ones you’d find on a preschool cheese bus. But with tons of people packed onto each seat. And the trip lasted 5 horrendous hours through windy roads.В (On my birthday, too! Looking back, I’m not sure why we didn’t pay for the cab!)

I started feeling sick on the bus and tried to convince myself I was carsick. But by the time I got off, I knew I’d caught a bad cold. Mal and I had planned to go hiking around Boquete, but for the next two days, I could do little more than lounge around our room at the Haven Spa. (We opted to stay there because there weren’t many other vacancies when we booked our hotel. On the upside, a serene atmosphere turned out to be just what I needed those last few days! Their massages were great, too, even though I desperately wanted to keep blowing my nose during mine.) 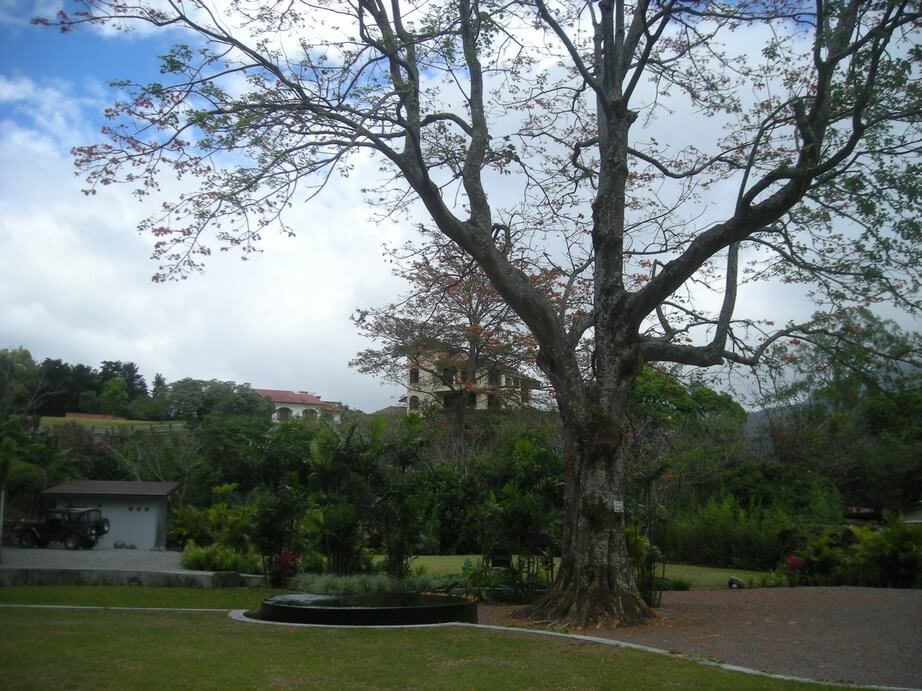 The best meal we had in Boquete was at The Rock, a cozy, classy restaurant outside of town. Its menu options are similar to what you’d find at nice places in the U.S.; accordingly, The Rock is super-popular with Boquete’s many ex-pats.

After Boquete, we spent one more night in Panama City before heading back to the U.S. Our last meal was at Rene CafeВ in Casco Viejo. They’re know for their inventive take on Panamanian cuisine, but neither Mal nor I were wowed. I was—and still am—dreaming of having a dinner of local fish and veggies at La Loma and then retreating to my bed in the treetops.

Have you been to Panama? What were the highlights for you?

(And don’t worry—even though I’m not going on a big vacation, I do have something small but very fun planned for my 30th. I have to go somewhere! ;))