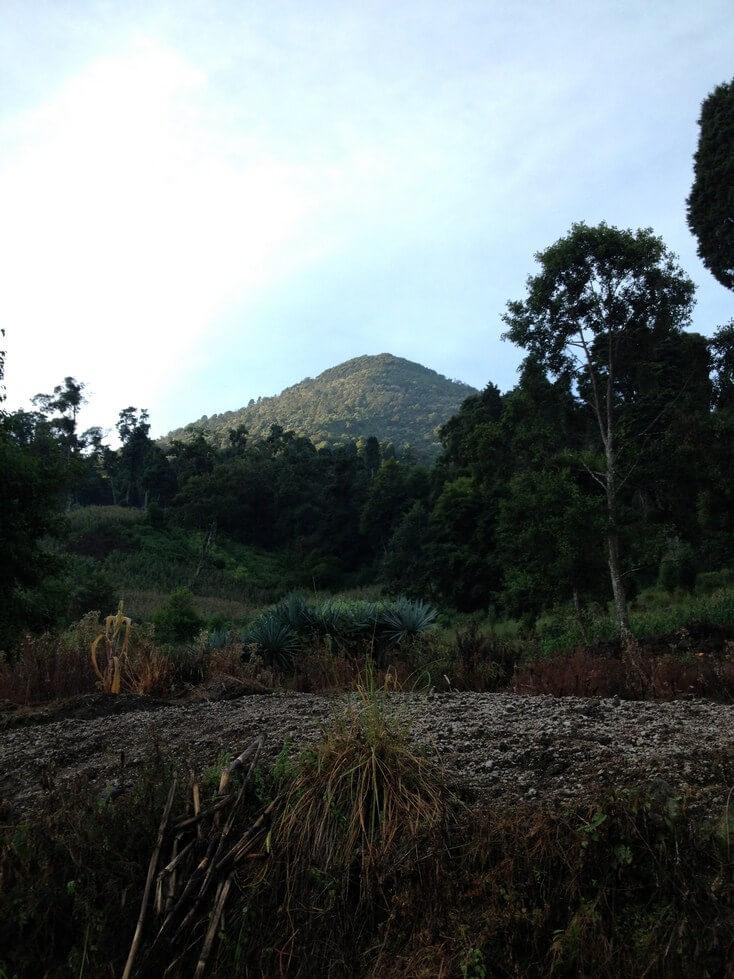 I feel like you can’t go to Central America and not do a difficult hike. Guatemala, like most countries in the region, has several hikeable volcanoes, and I was excited when I learned that one, Santa Maria, is in Xela. So before I even arrived in Guatemala, I was planning to hike that volcano.

PLQE had taken students up Santa Maria a few weeks before I arrived, so I booked a trek through Monte Verde Tours, a local outfitter. The hike almost didn’t happen. September is Guatemala’s rainy season and it poured for several days before my trip. The afternoon before, I called Monte Verde to confirm that the hike was still on; they told me that due to the rain, no one else had signed up and that they needed a minimum of two people. A few hours later, they emailed me that it was off. I was disappointed, but consoled myself with the reminder that I could now drink and go out with my fellow PLQE students after that evening’s dinner/graduation ceremony. (Every Friday, when students leave the school, they have to make a speech, read a poem, perform a song, etc. in Spanish to show off their newfound language skills.)

I was two beers into the night when, Haider, a PLQE student I invited on the hike, told me that he had just called Monte Verde’s office and signed up, and that the hike was back on. I put down my beer and headed home soon after–I needed to be up only a few hours later, at 4:30 a.m. Most people start hiking Santa Maria super-early, since it usually rains in the afternoon. It was downpouring when I fell asleep and I tried not to think about how muddy the trail might be.

The rain had stopped by the time Monte Verde picked me up at 5 a.m. We rode 30 minutes to the volcano, and commenced our climb just as dawn was breaking. 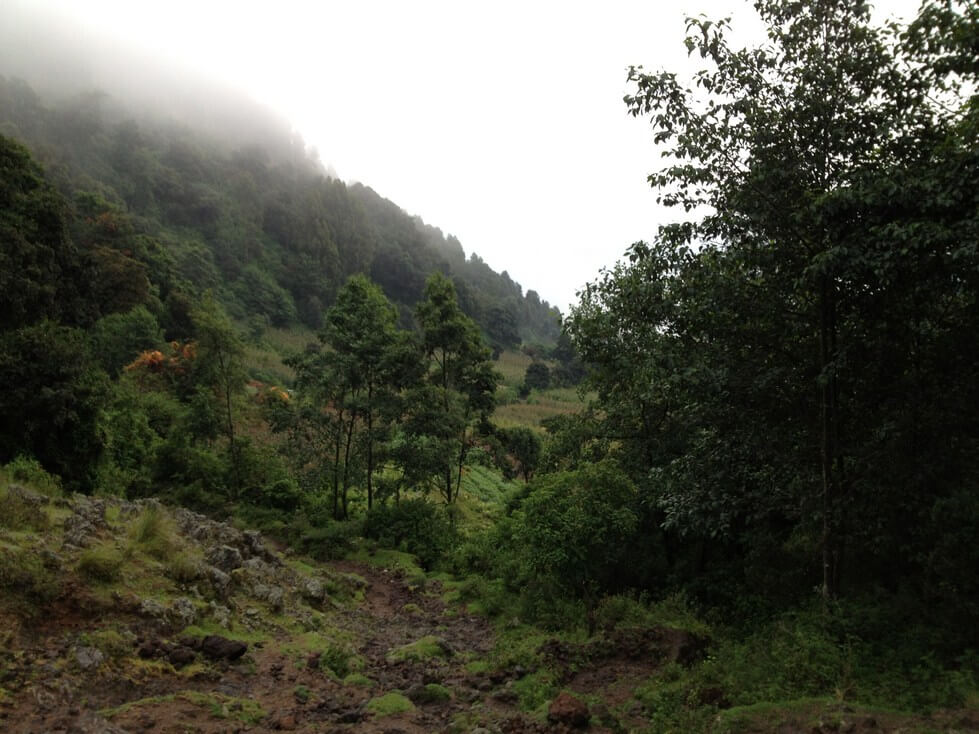 Our guide was Carlos, a 41-year-old local who, thankfully, kept his Spanish simple, but also spoke very good English. Along the way, he waxed philosophical about how lucky we were to have this opportunity to experience nature and how we need to be good to the earth. My favorite Carlos-ism from the trip: At one point, when I was wiping dirt off my hands, Carlos pointed out that it doesn’t matter how dirty we are on the outside, as long as our souls are clean on the inside. Very deep for hiking!

The trail was steep and a little muddy, but pretty well-kept. It wasn’t hard to figure out where to go, and rocks provided adequate footing. There was, sadly, a bit of litter strewn about at places.

The views along the way were stunning. We stopped frequently to take in the scenery and snap pictures. Until the clouds rolled in, after about two hours of hiking, we could see glimpses of Xela below. 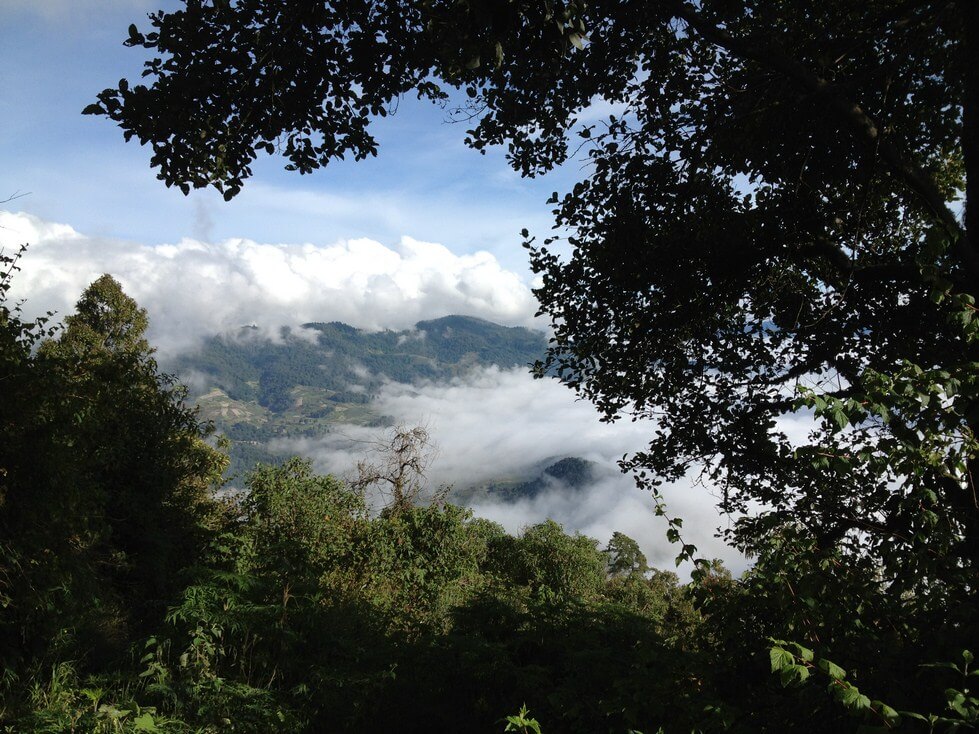 Eventually, we climbed above the clouds, higher than other nearby mountains. As we neared the summit, we ran into small groups of other hikers, including local women who were just wearing sandals on their feet! 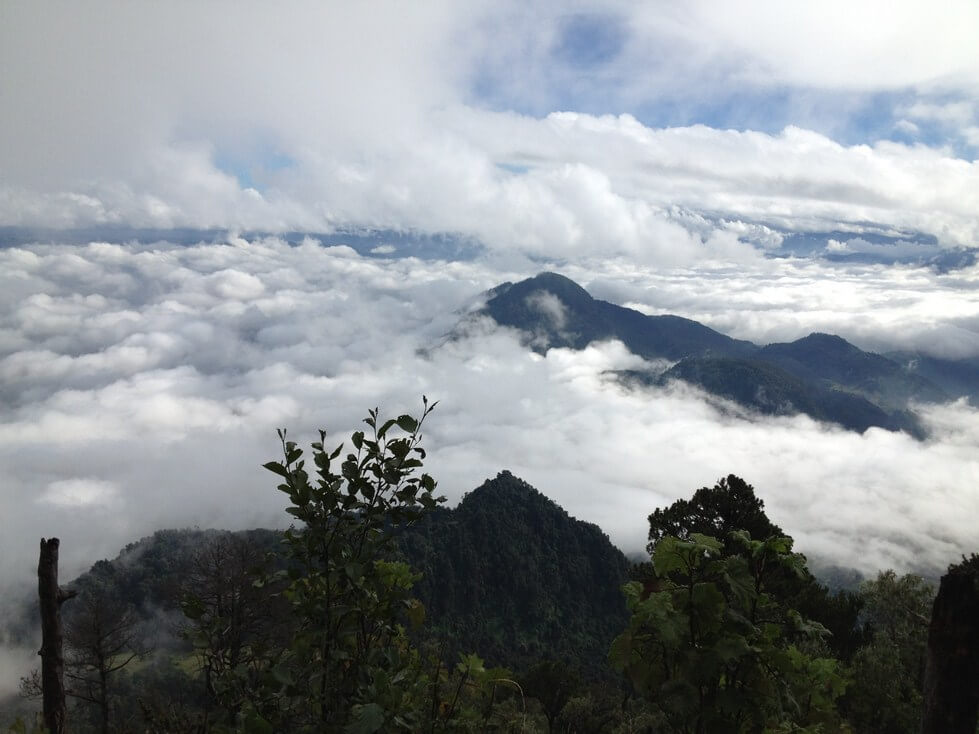 HereвЂ™s a shot of Carlos and Haider approaching the top. I was really excited when it came into sight! 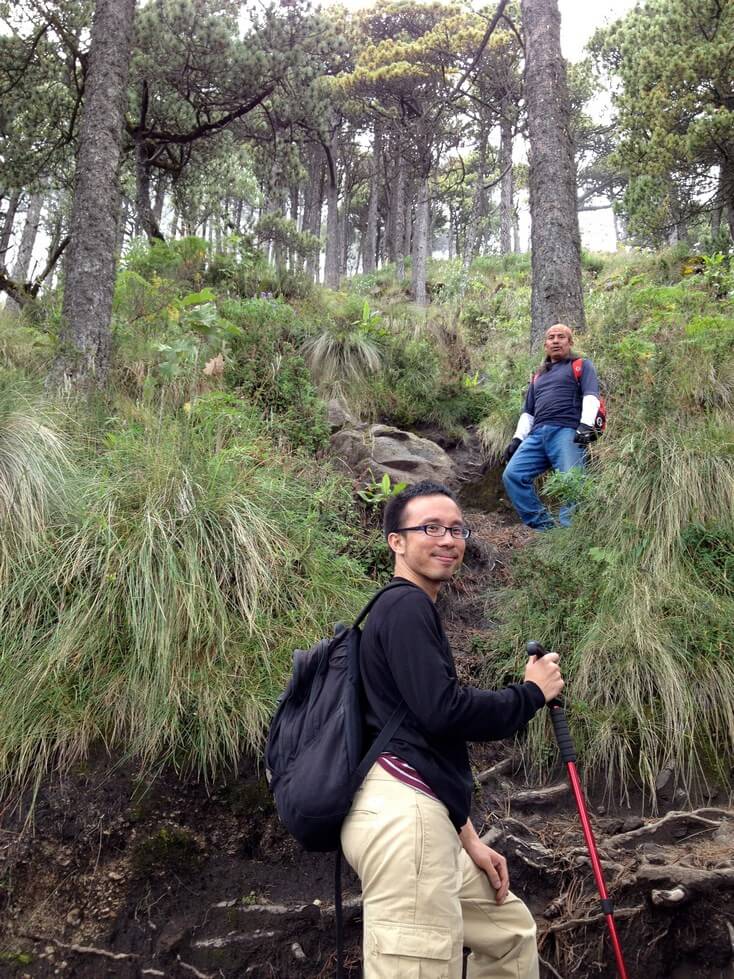 We reached the summit after nearly four hours of hiking. Unfortunately, clouds obscured views of the city. But they moved quickly and, at times, we could glimpse the hillside. My favorite spot was here, where you could see the horizon line of the Pacific, in the distance. 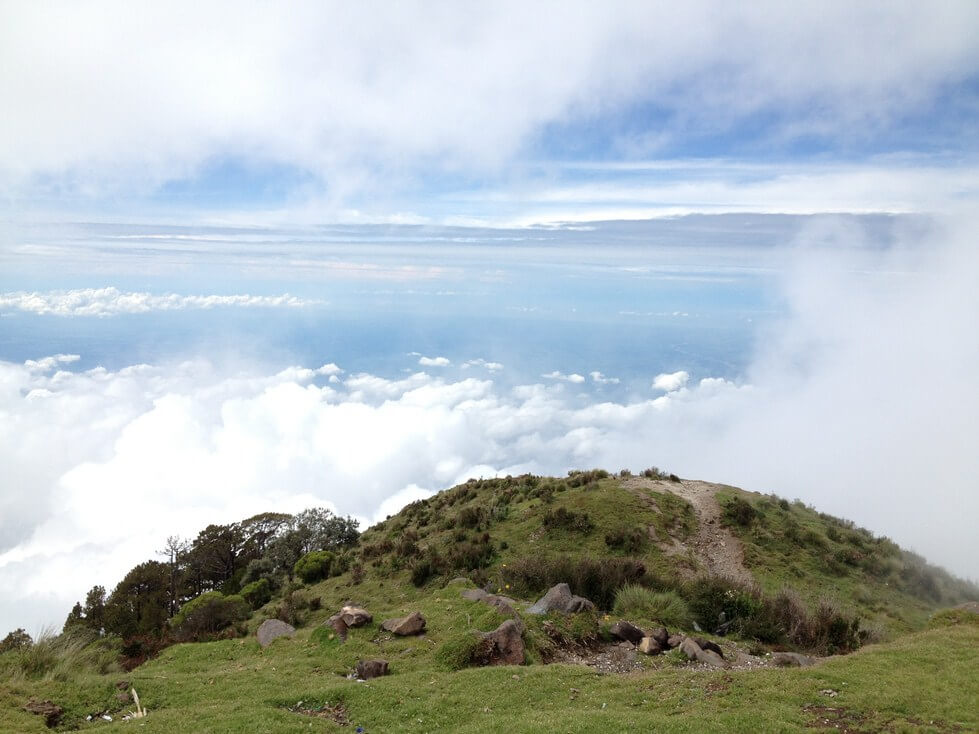 We ate lunch while admiring the view, in the company of wild cows who live at the summit. 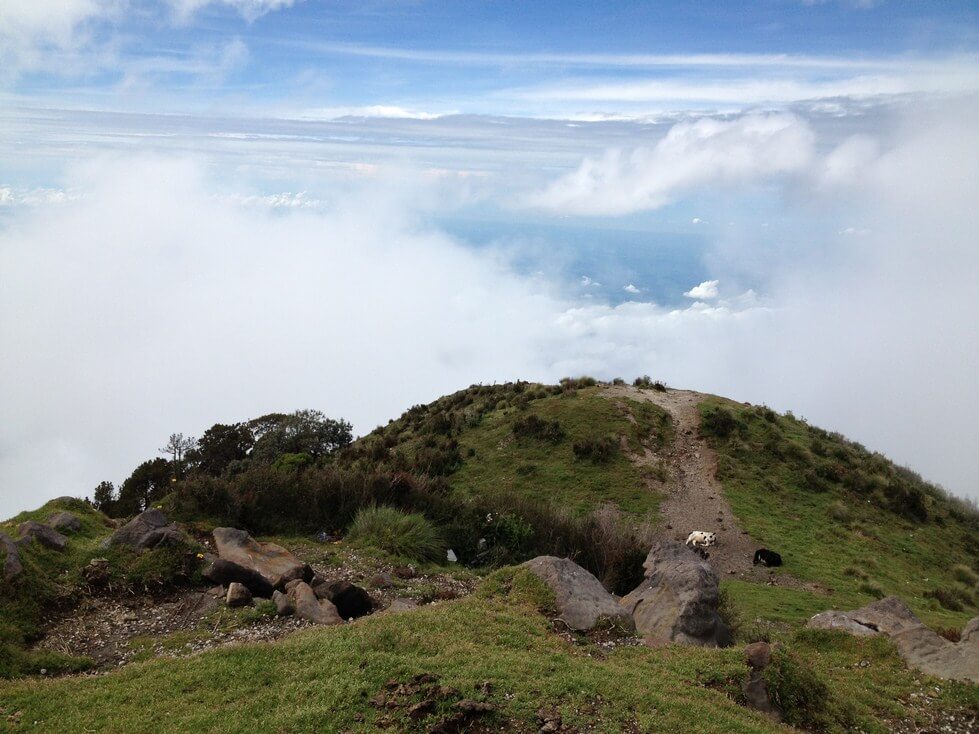 Then it was time to turn around. 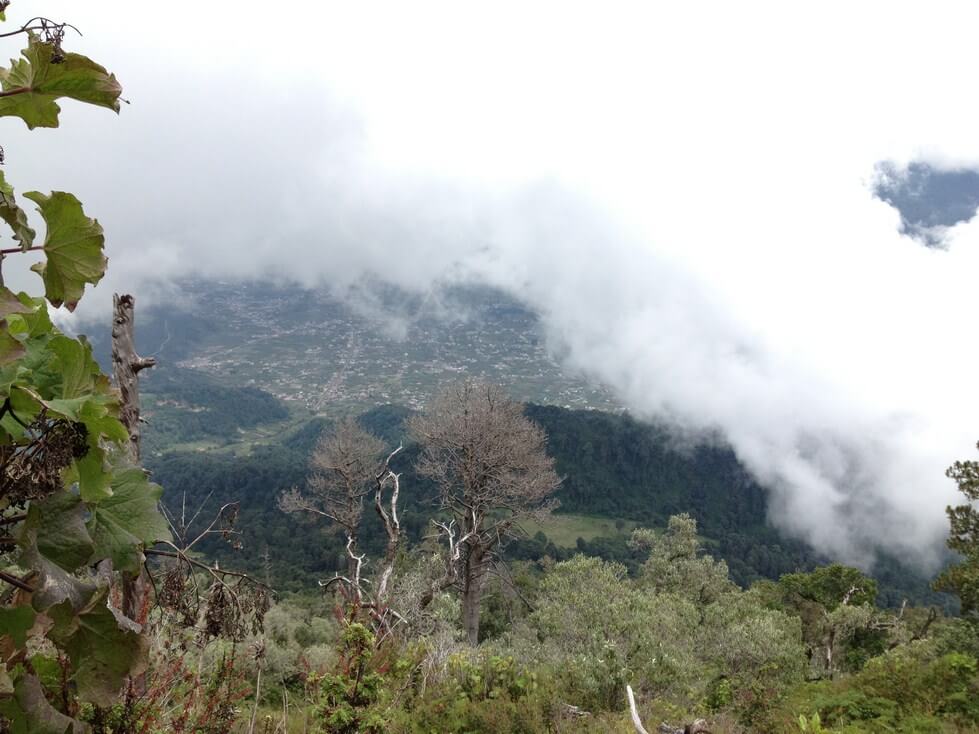 The climb down was slow going because it was so slippery. Haider and I had to navigate carefully and, at many times, we were practically skiing as we slid on the mud. In fact, I learned the word Spanish wordВ cuidaВ (careful) from Carlos telling us that so many times. My legs felt fine (all that ballet in August prepped me for this!), but toward the end, I was physically exhausted from hiking for eight hours, waking up so early, starving from not packing enough food–and just ready to get off the volcano!

Still, the hike was really a highlight of my trip. I won’t be forgetting the gorgeous scenery along the way, especially the views from the top. It was, as they say in the Spanish-speaking world, vale la pena–worth the pain.