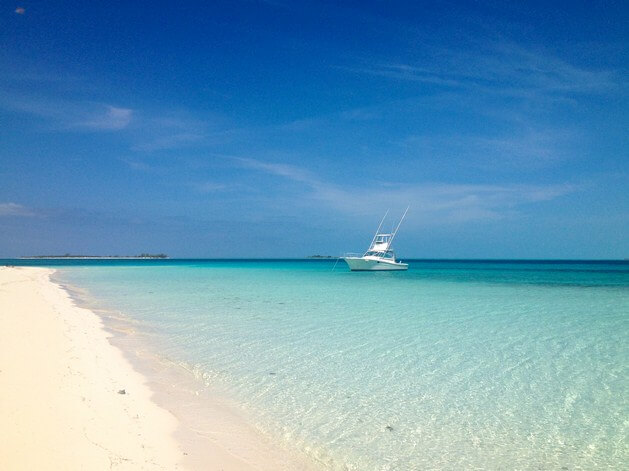 Recently, Mal, Peter, and our friends, Virginia and Doug, and I went to Eleuthera, one of the Bahamas’ “Out Islands.” True to that designation, Eleuthera felt wonderfully removed from everything. There were no cruise ships or mega resorts. We saw barely any other people during our time there—and, better yet, even fewer tourists. And since the island is so sparsely populated, most of the beaches we visited were pristine, and we had them to ourselves. And you know how much I love wild, isolated beaches!

Eleuthera is a long, skinny string bean of an island. It’s approximately 110 miles in length and two miles wide. Initially, I leaned toward staying in central Eleuthera, where Governor’s Harbour, the island’s largest town, is located. Most vacation rentals are there, and many, like this one, are gorgeous. Plus, the pink sand beaches of Harbour Island, which I’d written about, are not far away.

Despite those appealing factors, we ended up rentingВ Sanderling, a house in Cotton Bay, on the southern part of the island. Unlike the Governor’s Harbour options, this place was on the beach. (As opposed to a few minutes’ walk away—I know, so far.) All the bedrooms had private bathrooms.В Plus, there were no other rentals in Cotton Bay, and we wanted to be around as few other people as possible. And, best of all, the rental fee included a cook, who’d received rave reviews. Um, not having to prepare meals for a group every day? Sold!

Sanderling wasn’t swank and modern; the one-story, yellow house was built in 1959. But it was comfortably furnished, bright, airy and well-kept. Coconut trees grew on the property… 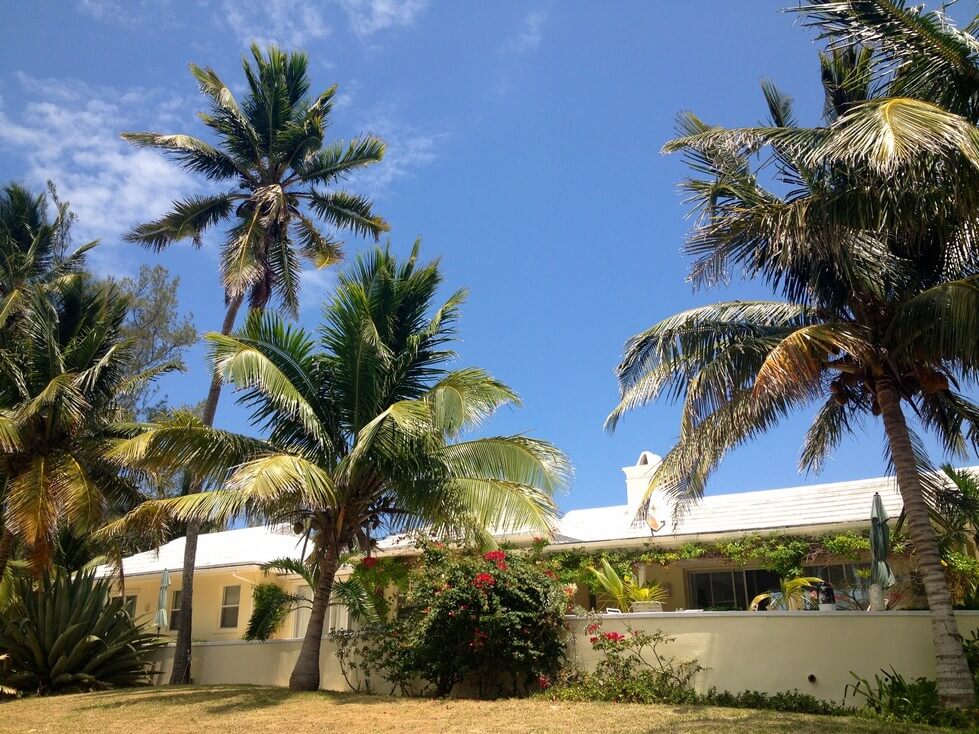 …and a small dock out front led to a calm cove. From there, we (well, everyone but me) launched kayaks and paddled them into the ocean. Another night, we went swimming—and later found out that’s prohibited because sharks lurk there, once the sun sets! Luckily, we made it out with all of our limbs intact. 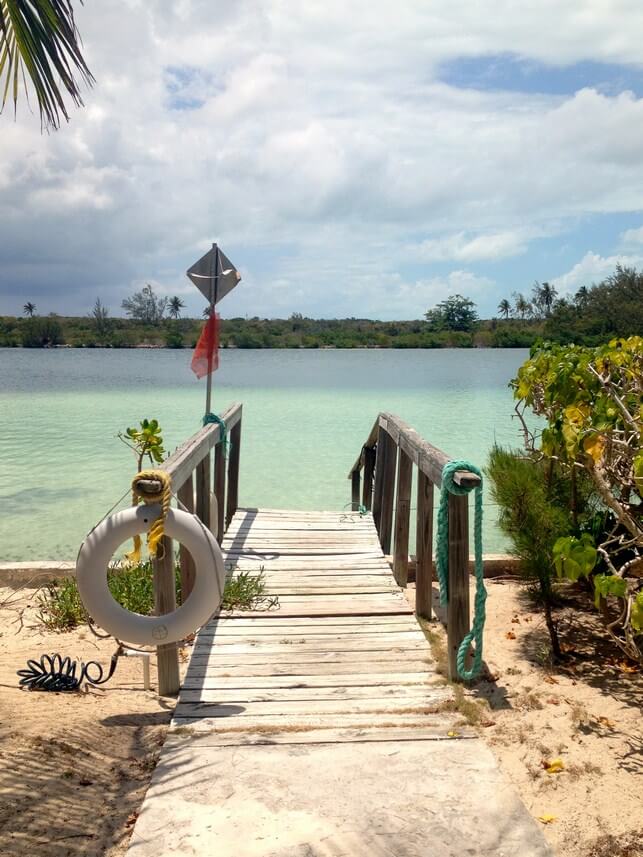 …and the porch, right behind it, had an additional seating area, where we played several hilarious rounds ofВ Cards Against Humanity—helped by cocktails made with Ole Nassau, a Bahamian rum.

The dining table is where we ate all the meals Ruth, the cook, prepared for us. She was lovely and her food was delicious—lots of fresh fish and veggies. Plus, Ruth hadВ worked at Sanderling for 22 years and told us about the family that owned it, as well as bits and pieces of local news and history. 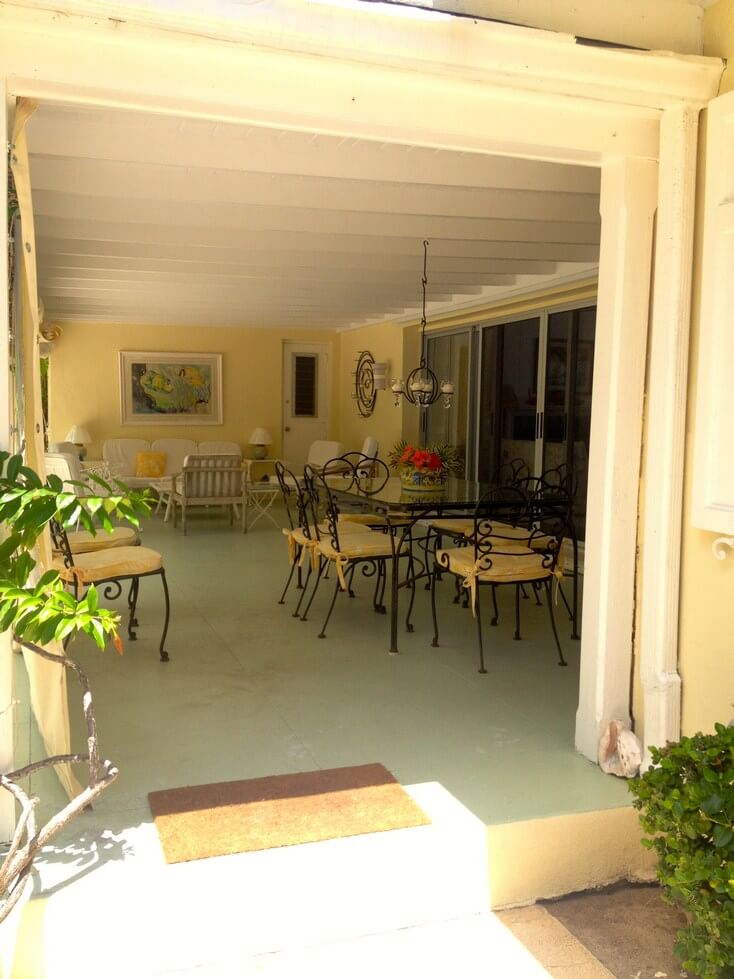 From the front porch, you could see through to the ocean side of the house…

…where we spent most of our free time, just reading, relaxing and enjoying the view.

And—this was my favorite part—a short staircase led down to our very own private beach, which was beautiful and spotless. 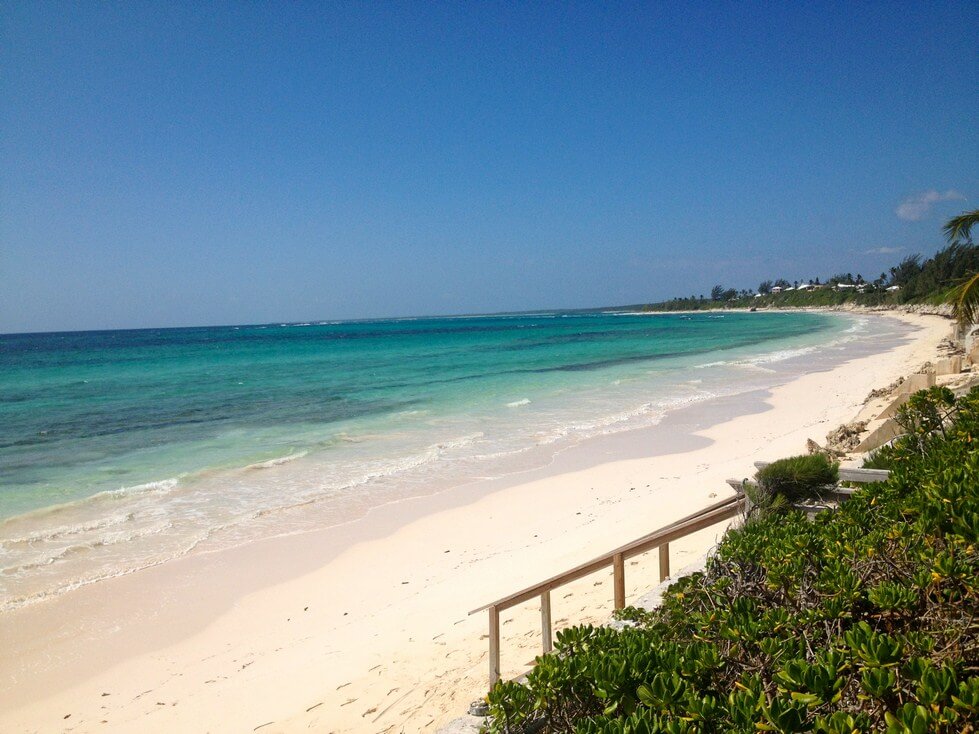 While I couldn’t have been happier with our rental, I did feel a little sad seeing how the surrounding neighborhood had deteriorated. Cotton Bay was once a fancy resort community. In 1959, Juan Trippe, founder of Pan Am, opened the exclusive Cotton Bay Club and golf course. However, after the airline went bust and hurricanes ravaged the island, the resort was abandoned. Ownership changed hands a few times, and the current owner has let it fall into disrepair. The hotel is covered in brush, and golf course looks like Jurassic Park. 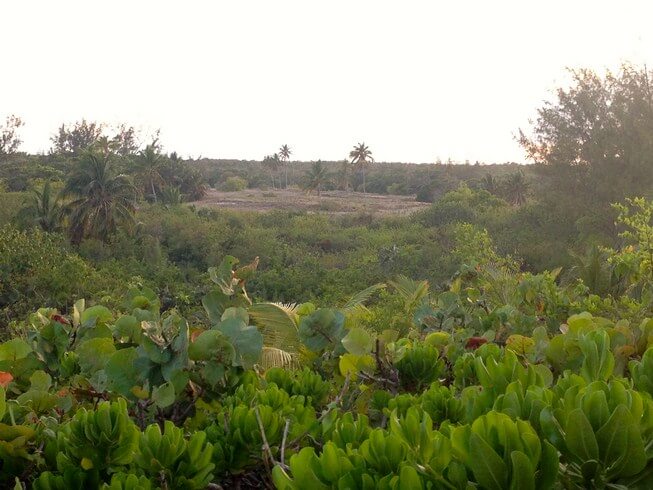 The single road winding through Cotton Bay is full of giant potholes. Half the houses are well-kept and the rest are run-down. (Despite that, we never felt unsafe.) Ruth told us that she’d like more tourism to boost the area’s economy, but not so much that it erodes the area’s peaceful setting or strains its natural resources. I couldn’t agree more.

Our rental came with one more amazing perk that we didn’t even know about until we got there: the use of the owner’s deep sea fishing boat and a captain!

The guys were instantly ready to fish. Given my history of seasickness in nearly every country I visited, I was a little hesitant. But once Sydney, the captain, mentioned that we’d stop at a small island to hang out and go snorkeling, as well, I was game. Besides, I figured that I’m an old pro at leaning out the back, “feeding the fish,” then getting on with a trip!

So the next morning, we boarded our boat, the Shady Lady…

…and got on our way. 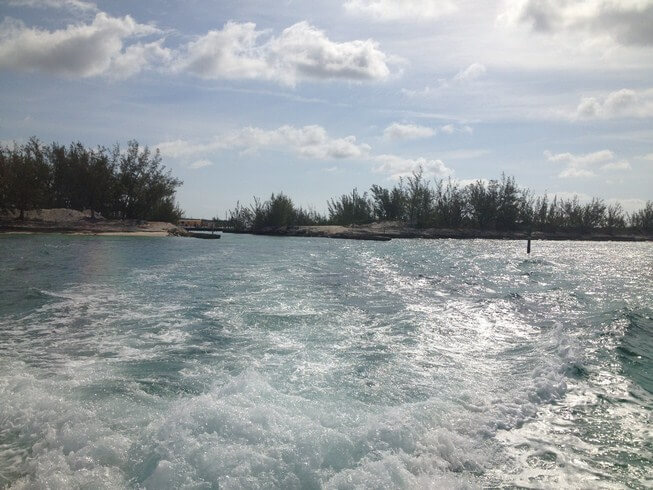 For about 20 minutes, I felt great! I was thrilled to be bouncing over the waves, watching the water turn deep blue. But once the fishing part started, things went downhill. Deep sea fishing, I learned, involves lots of slowly motoring around, trying to get fish to bite. And if a boat isn’t moving fast, I’m not feeling too well. Plus, the smell of fuel was getting to me.

I was trying to keep my breakfast down, when we got our first bite. In fact, I was so intently staring at the horizon that I didn’t even hear Sydney yell for someone to reel it in. Luckily, Peter jumped into the chair and pulled in a giant mahi. (Which I, unfortunately, didn’t get a photo of, for obvious reasons—the one below is the best I could do, in my compromised state!)

Sydney speared the fish, which then splattered blood all over the deck. Between that, the nausea and the fumes, I nearly lost it. Mal was feeling just as bad, as well. I don’t know who made the executive decision to take a break from fishing, but someone secured the poles and we were moving at a faster clip.

I happily jumped off the boat…

…and headed to shore.

This was the highlight of my trip. We’d landed at a deserted island with a spectacular beach—one of the prettiest I’ve ever seen. The sand was perfectly round, soft white grains, and the water was amazingly clear and calm. (The only beach that might top it is Australia’sВ Whitehaven Beach.) 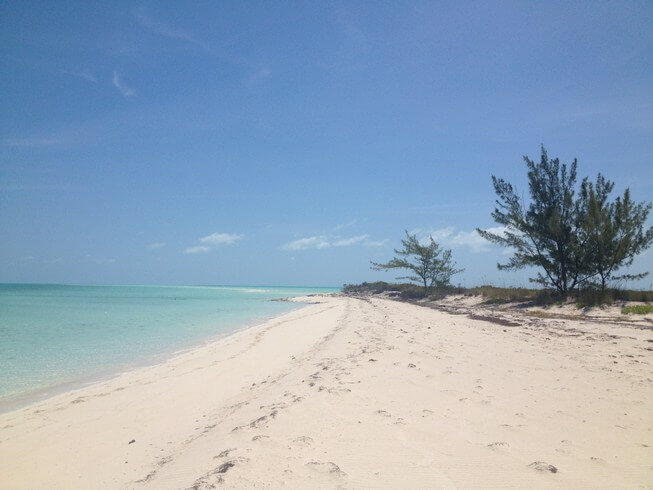 I found out, from Sydney, that we were on Water Cay, a tiny island that’s one-third of Schooner Cays, off the coast of Cape Eleuthera, on the island’s Caribbean side.

We snorkeled around the Shady Lady, but the only fish I saw was a barracuda—which I seem to encounter on every trip!

And we took lots of photos. 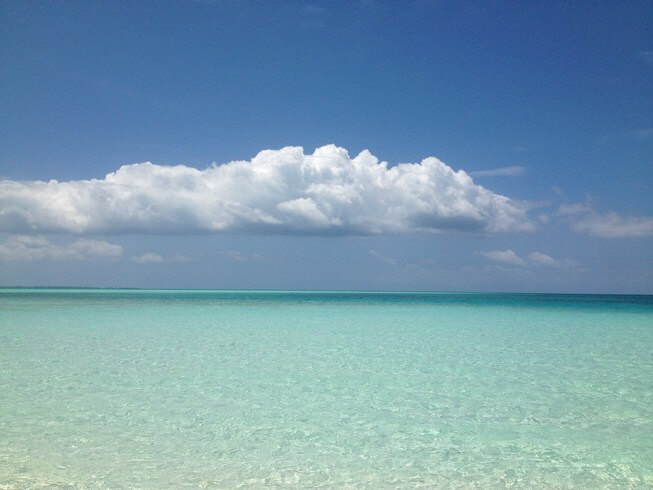 I could have stayed forever.

But eventually, we swam back to the boat and returned to the open water. We fished long enough for Doug to catch another mahi—but not so long that I got sick—then headed back to Cotton Bay…where Ruth cooked up some of that mahi for lunch. (And lunch and dinner the day after, too!)

After our deep sea fishing excursion, we took naps, then drove an hour north to Governor’s Harbour’s Friday fish fry. (Along the way, we had trouble with our car’s radiator. Everyone who passed stopped and offered help. In what seemed like a crazy coincidence, the owner of the car rental place happened to be driving by—even though we were miles away from his town—and fixed the car. But, as Ruth later told, us, that’s Eleuthera!)

The fish fry was smaller than I expected it to be. A wooden shack near the water served food and drinks, and a DJ played music in the streets. Though it felt touristy, there were just as many, if not more, locals there. (Maybe it seemed that way because this was the first time we’d seen other groups of travelers!)

At the stand, you had a choice of a whole fried fish (or BBQ chicken) and sides, like rice and peas, mac and cheese and potato salad. 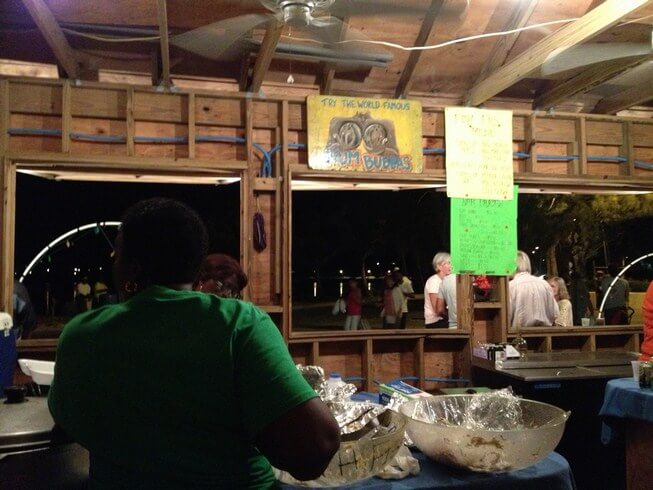 The fry’s signature drink is the “Rum Bubba,” a (very potent!) bright red punch spiked with lots of its namesake alcohol. 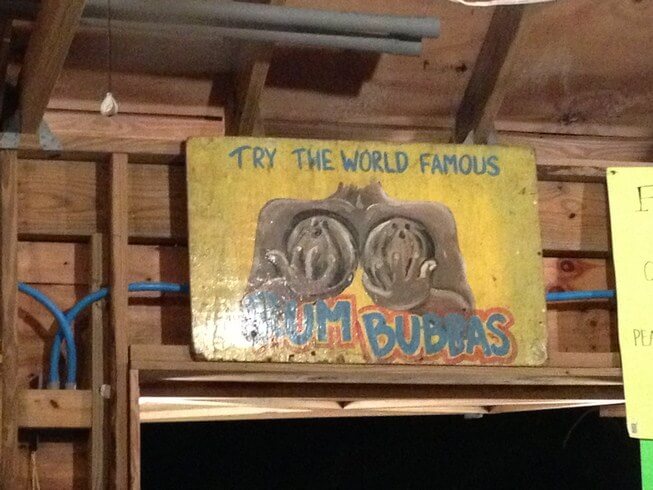 The food was delicious! We each got one of these plates and devoured everything with our hands—the only way to eat a meal like that, by the beach. 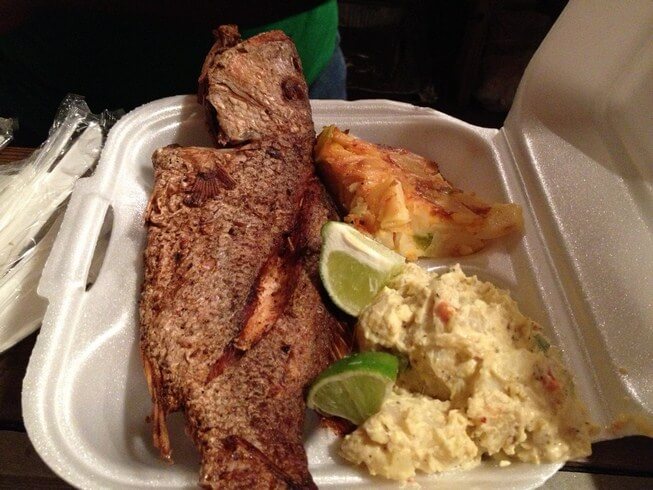 We also had conch salad. The conch man pulled the mollusk from its shell… …and chopped it, along with onion, tomatoes, celery and an insanely potent pepper. I like spicy food, but I’ll be honest—I only had one bite! The pepper immediately spread across my tongue, and I spent the next few minutes guzzling my Rum Bubba!

We hung around for a little, taking in the scene, chatting with other fish fry goers, and listening to the DJ. Then we hopped back in the car and drove an hour south, back to Cotton Bay.

Besides the fish fry, we ate out one other time. Sammy’s Place is one of the few restaurants on the southern part of the island. It’s a nondescript place a few blocks off the main road. 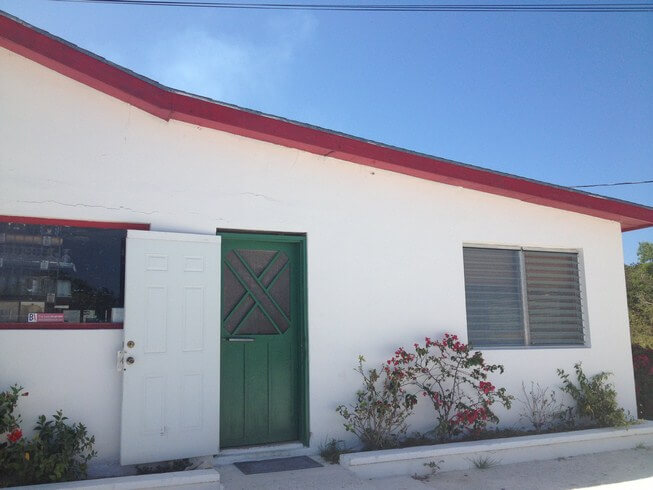 The lunch menu offers staples like sandwiches and burgers, along with Bahamian comfort food, like fried conch, conch fritters and mac and cheese. I enjoyed every bite of my meal, accompanied by a Kalik beer. Due to distance and time, we never made it to Harbour Island’s pink sands. But on our last day, we visited Lighthouse Beach, another pink(ish) beach at Eleuthera’s southern tip. The bumpy ride was well-worth it, though. Like pretty much everywhere else we went on the island, the gorgeous beach was nearly deserted; we saw only two other people.

We immediately went for a dip in the clear, calm water. 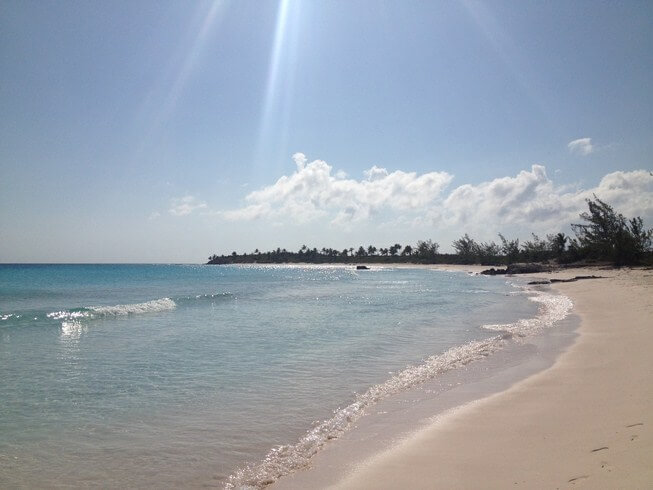 Afterwards, we walked up a small hill to enjoy the view… …and reach two other parts of the beach. 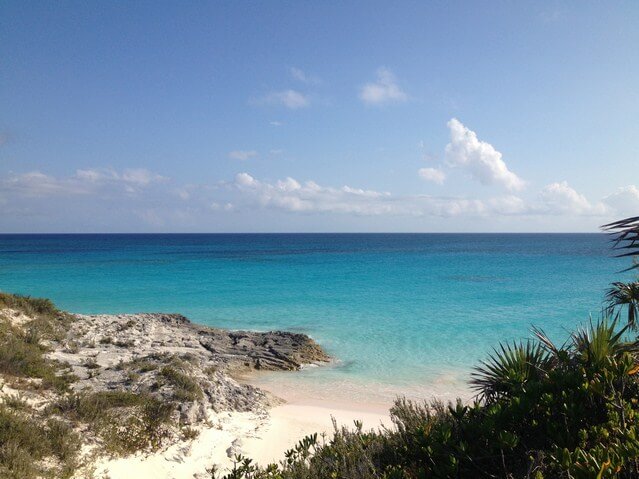 We couldn’t resist taking photos on the weathered rocks that jutted out onto the sand. We stayed at Lighthouse Beach until the sun started setting. I had to drag myself away from it—and from Eleuthera, itself, when it came time to fly back home, the next morning.