I don’t go to too many concerts these days, and when I do attend one, it’s usually a free summer show. There’s no shortage of them, and that’s one of my favorite parts of summertime in NYC.

After seeing shows at various venues over the course of several summers, I noticed something strange: I enjoyed the concerts at South Street Seaport’s Pier 17 much more than anywhere else. This surprised me because I generally try to avoid the Seaport at all costs. (Well, except for Front Street, which is a little restaurant row north of Pier 17 where tourists rarely venture, for some reason.) I find Pier 17 to be an oddity; it can best be described as hollow. There’s nothing distinctly New York about the place. In fact, it feels more like a cross between a suburban mall and a circus, and I can’t figure out why tourists flock there to shop in stores they could visit anywhere, eat at overpriced restaurants, and gawk at cliche street performers. (Oh look, another silver-painted person!) You could transport Pier 17 to any waterfront city; just look at Faneuil Hall in Boston. Same vibe.

But somehow, when there’s a concert there, Pier 17 becomes great place to spend a Friday evening. The bands are usually unknown, so it never gets too crowded. There’s an area right in front of the stage where people can stand, but we prefer to sit off to the side, closer to the shops, which offers a great view of the performers, as well as other people walking around. And this is the real reason I love concerts at Pier 17: the people-watching is unparalleled.

For such a diverse place, New York can often feel quite segmented, with different groups never really mixing. At every other NYC outdoor concert venue, you get a homogenous group of people based on the location and the act. SummerStage shows that feature indie bands are filled with hipsters and, a bit strangely, with high school and college kids eager to spend a day in the city. SummerStage dance shows can be a bit more diverse, but when it comes down to it, it’s mostly the arty, well-educated crowd. Pier 54 crowds have a bit more variety, but most people tend to be 20 and 30-somethings of the not-quite-hipster-but-almost variety. And any Williamsburg concert? No explanation necessary.

So in that respect, South Street concerts are refreshing. There’s no dominant group there. Instead, it’s a nice cross section of people of all ages that includes locals from all boroughs, office workers hanging out at the end the week, some hipsters and arty people, U.S. and international tourists, families, people who just happened to walk by an see a concert going on, and so on.

Plus, watching the sun set over the water and the buildings of lower Manhattan is pretty sweet, too.

My boyfriend spent the weekend apartment hunting with one of our friends. They saw several places, mostly in Hell’s Kitchen, the UWS, and Morningside; some were nice and large, others were tiny and unlivable. But the scariest/craziest/most ridiculous place they saw was in the West Village.

This two-bedroom was in a prime location near 6th Ave. and W. Houston. But it didn’t have a private bathroom. The toilets were down the hallway behind two padlocked doors. On the “upside,” though, it did have a tub and shower — that was conveniently located in the kitchen, right next to the sink.

This apparently led to an animated discussion about whether it would be worse to share a toilet or shower with strangers. I, personally, would rather share a toilet and have my own shower; there’s nothing grosser than dealing with other peoples’ hair. Except, maybe, washing your veggies in a sink right next to your shower.

For the past few weeks, I’ve been working at an in-house web editing gig. The offices are on the 15th floor of a typical, nondescript building in the 30s — there’s nothing remarkable about the space except for this feature: a tiny patio that looks out at water towers, rooftops, and other buildings. Sure, there are cigarette butts scattered around the floor and the railing and door are rusty. But it feels like such a luxury to be able to step outside and get a breath of fresh air every so often in a quiet spot in the middle of midtown. 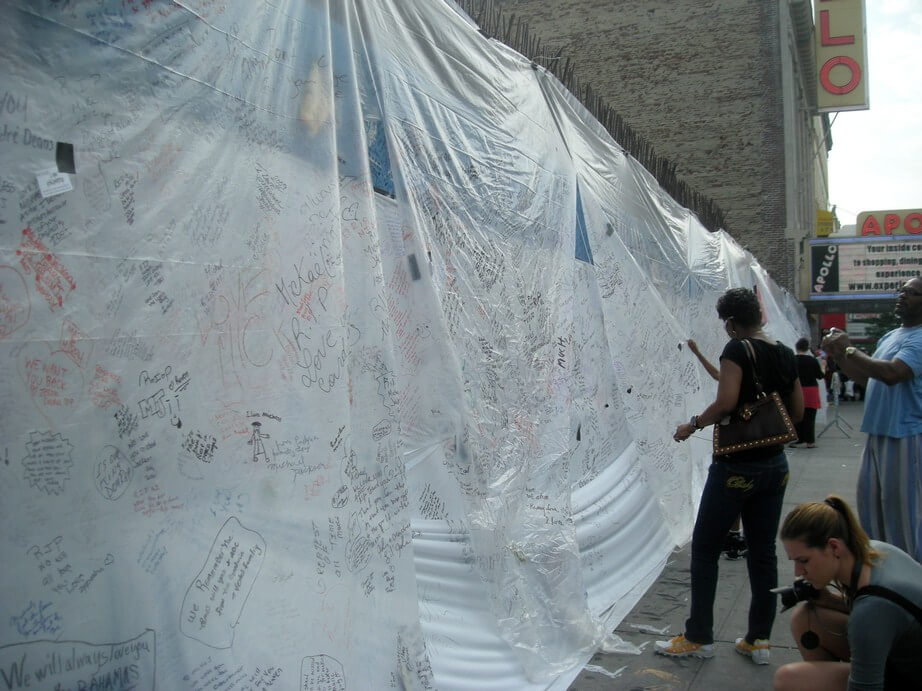 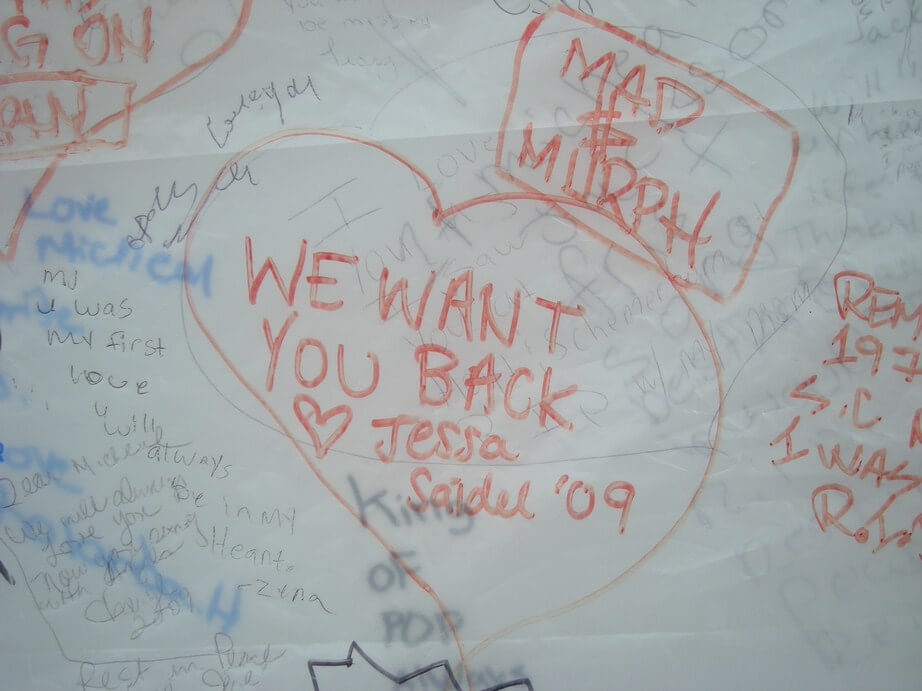 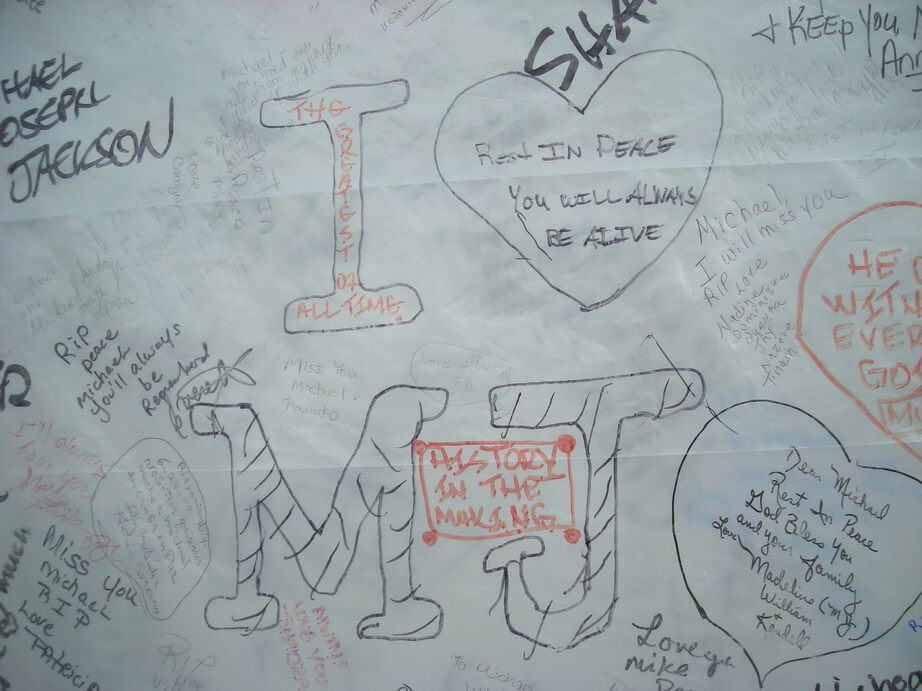 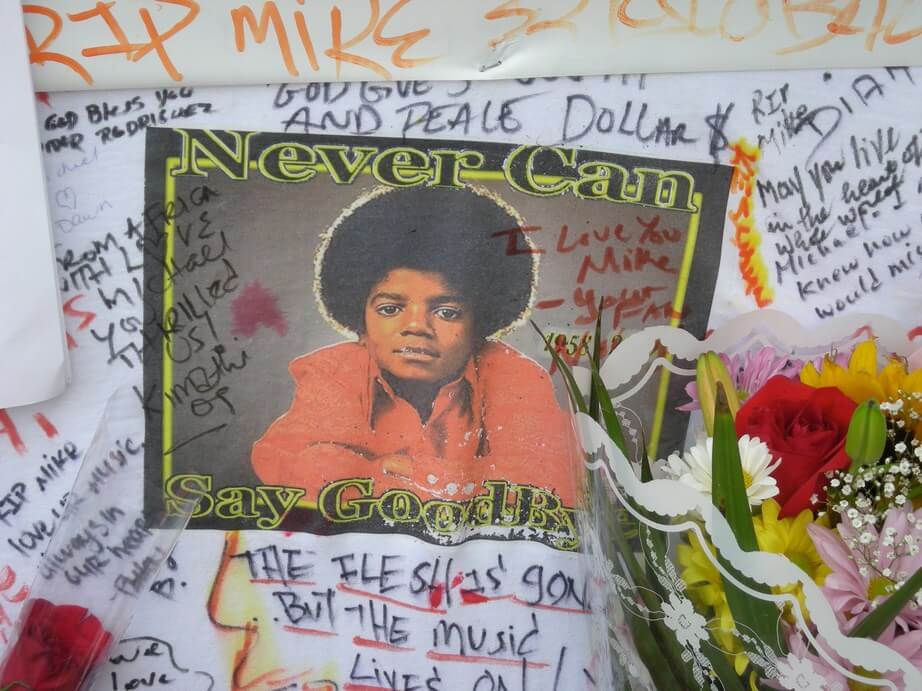 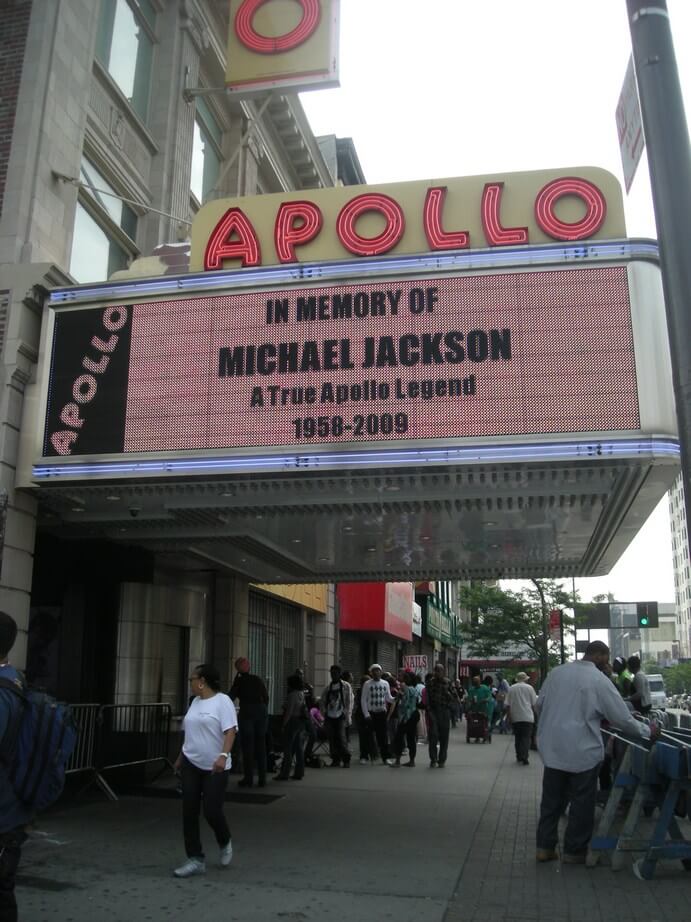 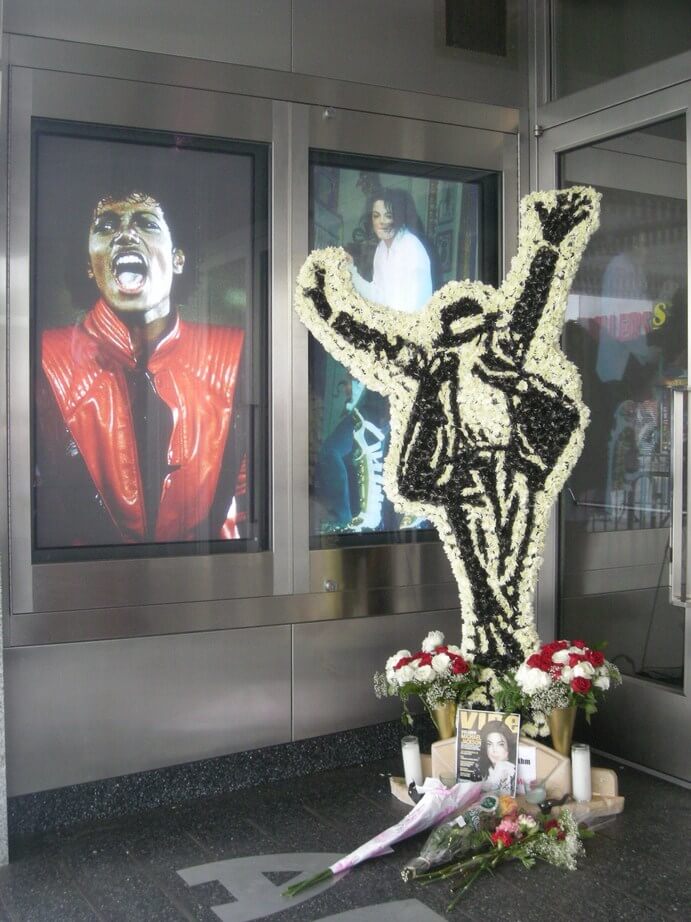 I wanted to join a CSA since I first read about community supported agriculture. The majority of my grocery budget goes to buying produce (mostly organic), but I tend to buy the same fruits and veggies (spinach, arugula, bok choy, mushrooms, bananas, plums, etc.) all the time because they’re what I’m familiar with and they’re usually not too expensive. I’m also not a great cook — I’m constantly stuck in food ruts — and I figured a CSA would force me to learn how to cook new dishes since I’ll have no control over the fruits and veggies I’ll receive. Oh, and it also seemed like a good way to support local, organic farmers.В

After doing a bit of research last fall, I learned that there’s a Washington Heights CSA that distributes veggies in Fort Tryon Park, which is only a few blocks from my apartment. The produce comes from Windflower Farms, a small, organic farm upstate in the Taconic Hills. Joining the CSA was the hard part. Apparently, a glut of people also wanted in, so I was on a waiting list for several months. A few weeks ago, I received an e-mail stating that I was accepted from the waiting list, and I signed up for a vegetable share (22 weeks) and a fruit share (20 weeks).

Yesterday was the season’s first pick-up, so I headed to the distribution site, at New Leaf Cafe, in Fort Tryon. I was surprised to find a rather long line of people also picking up veggies. Apparently, the CSA has quite a few new members, and a volunteer kept reiterating that they’d never had a line before.В 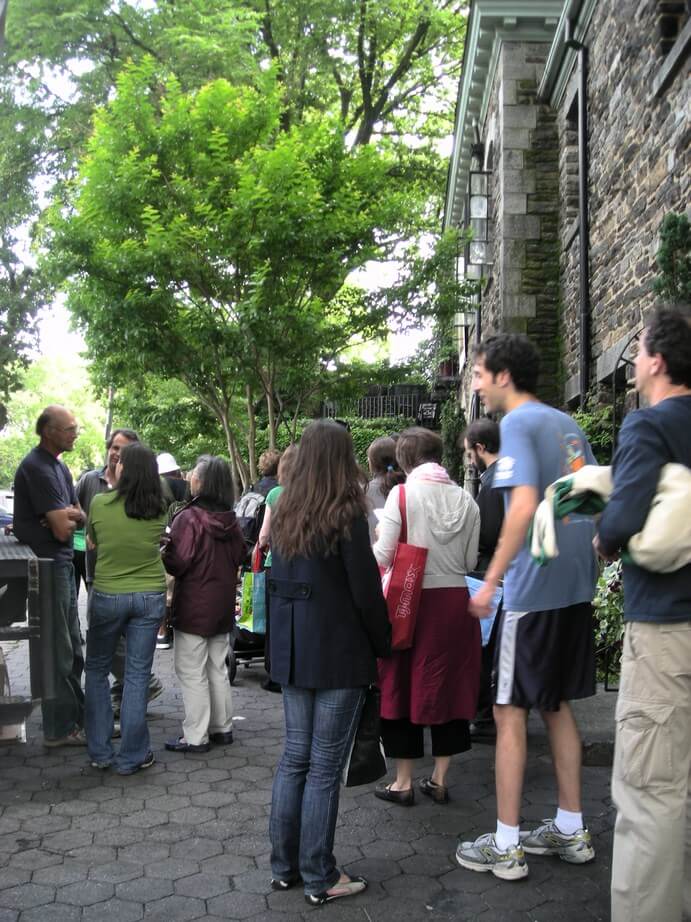 It moved quickly, though, and soon I stood before a row of boxes, each bearing a different veggie. A large chalkboard informed us how many of each were were allotted.В 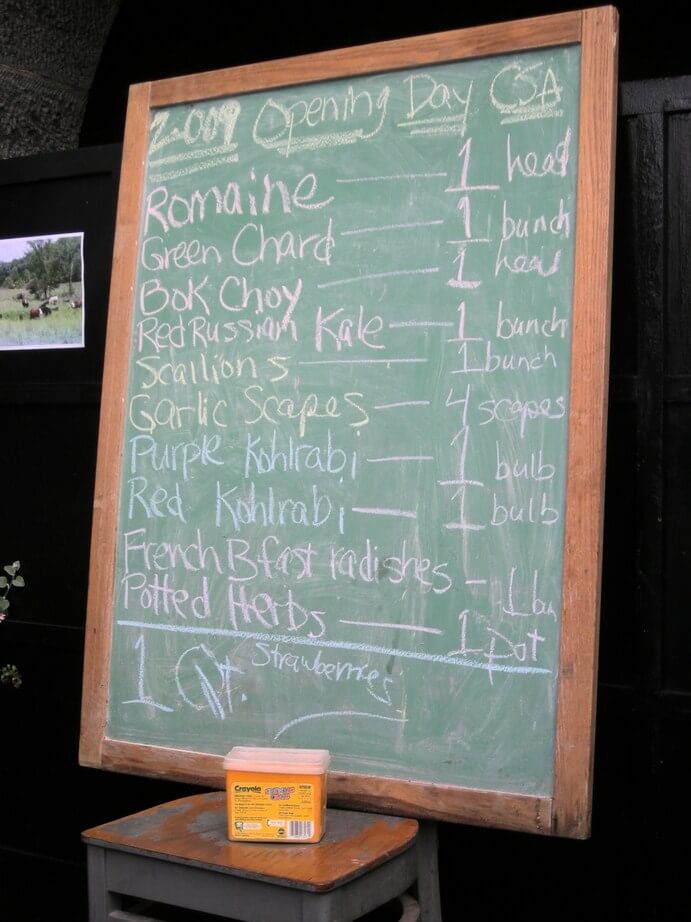 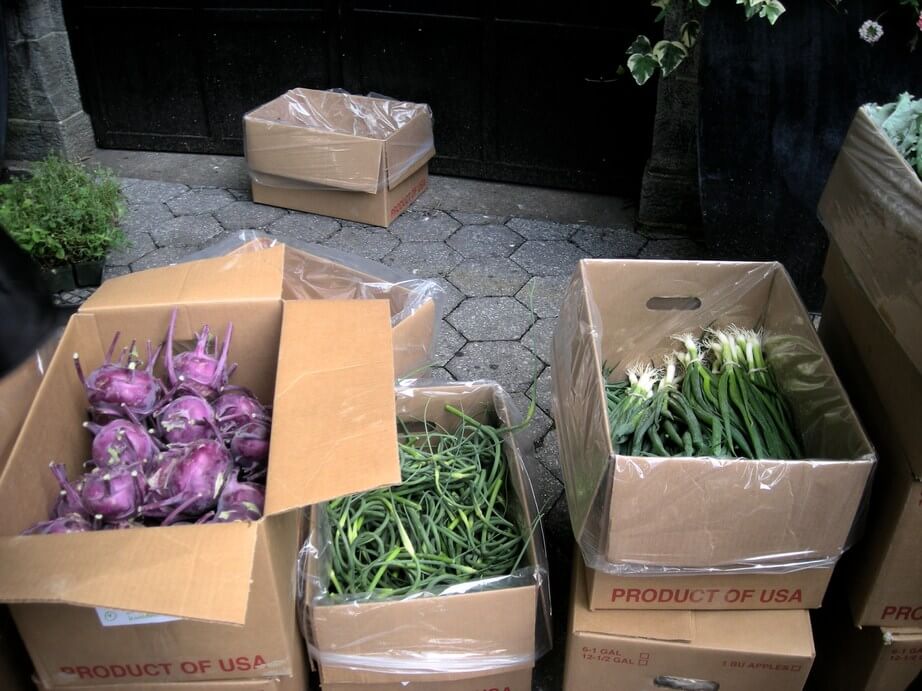 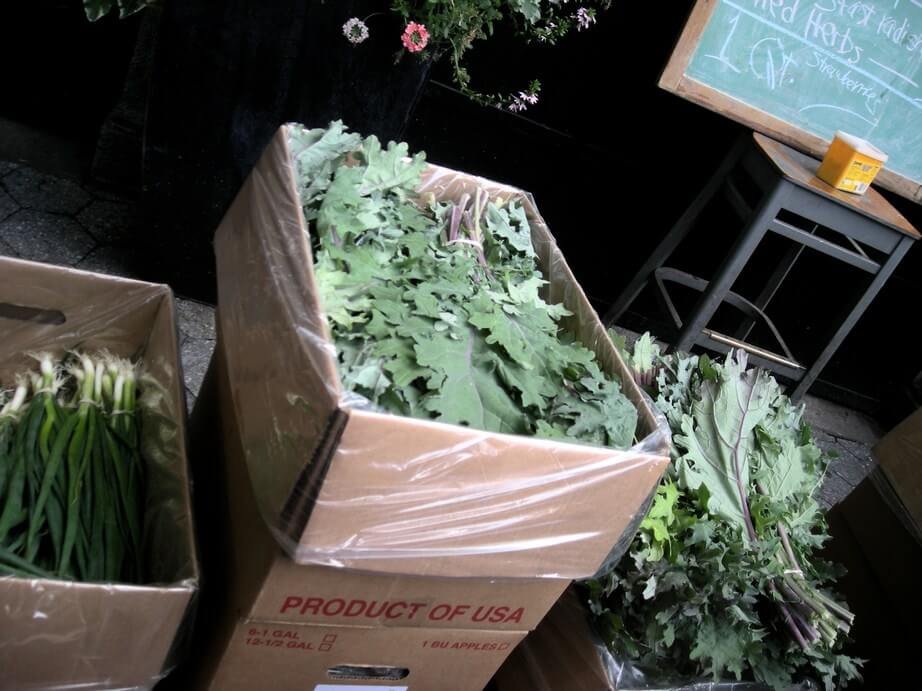 I returned home with this gorgeous array of veggies, fruit, and herbs. Then came the hard part: washing, breaking down, and deciding what to do with all of it. 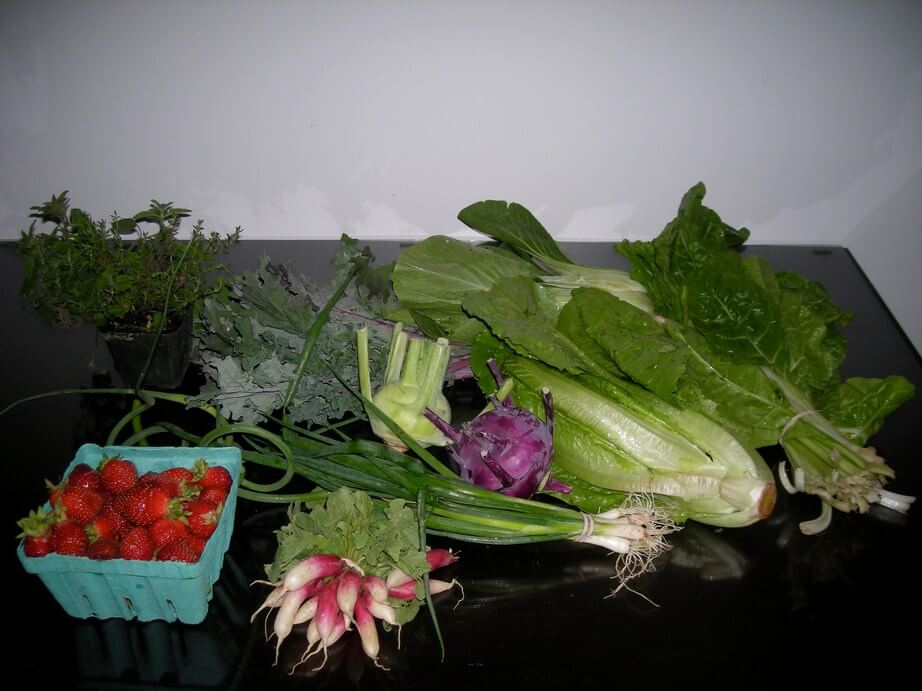 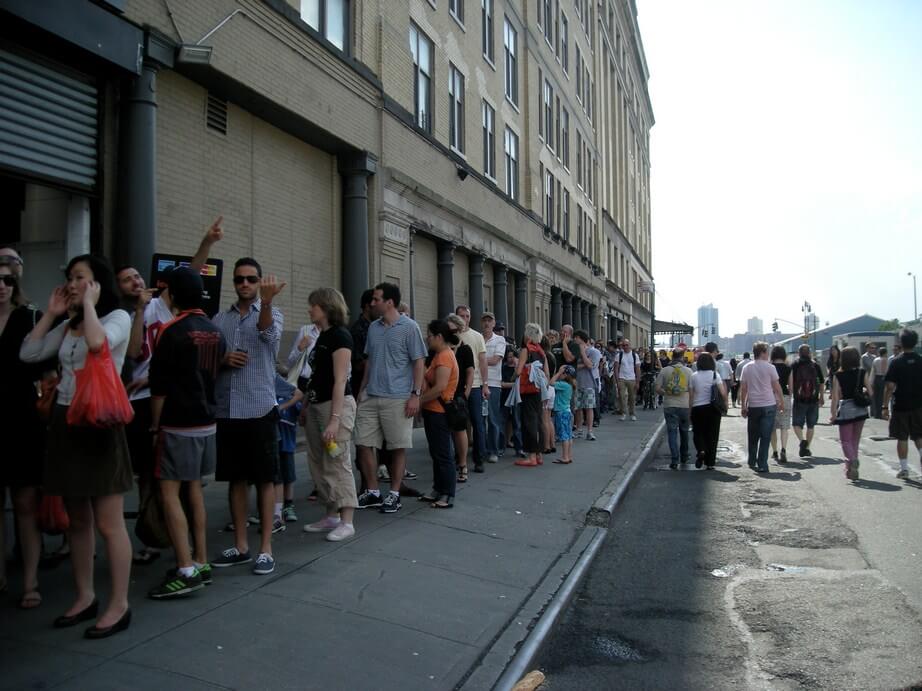 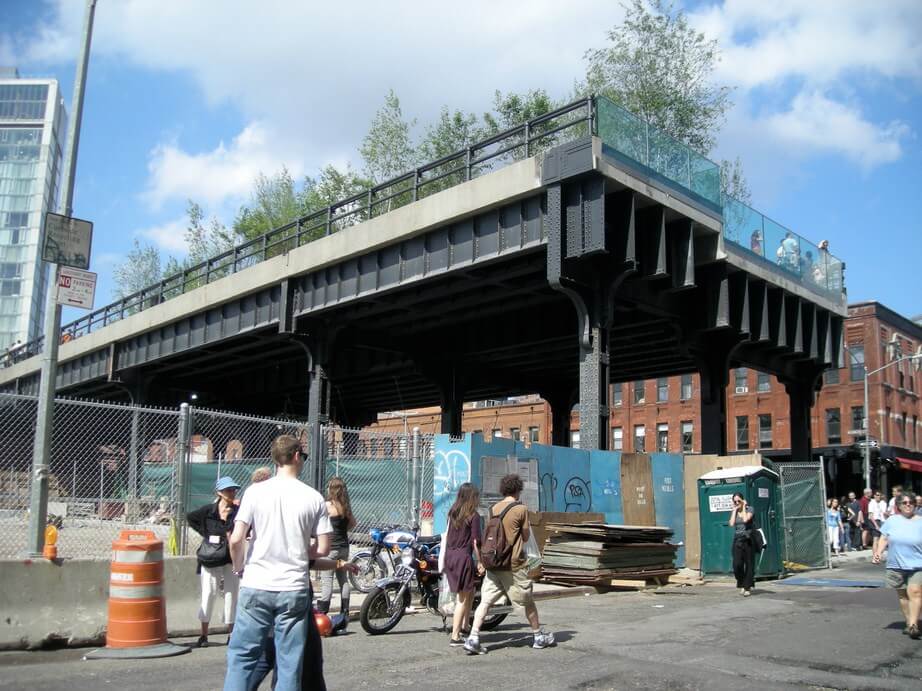 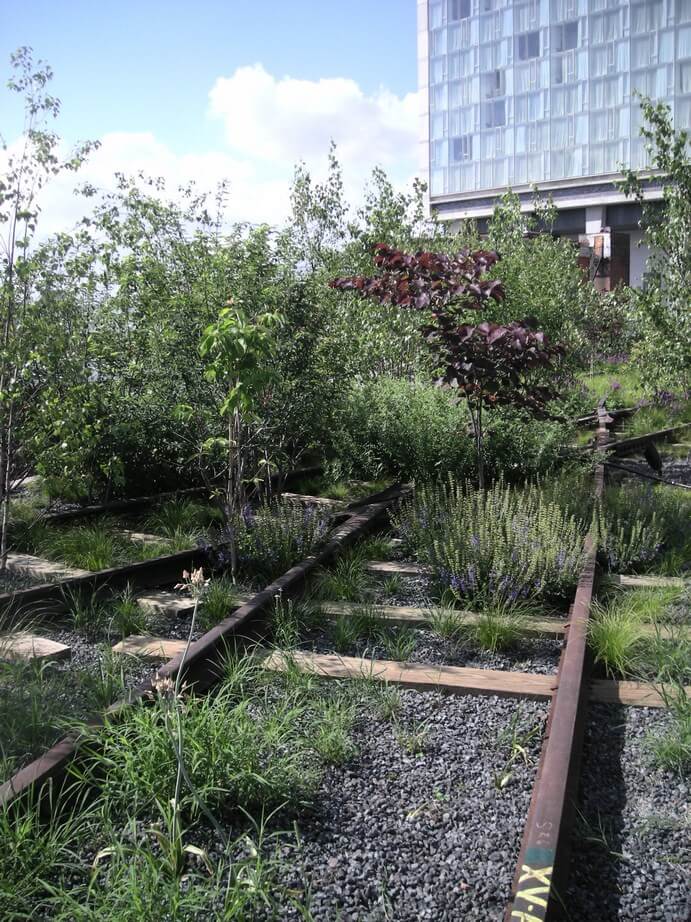 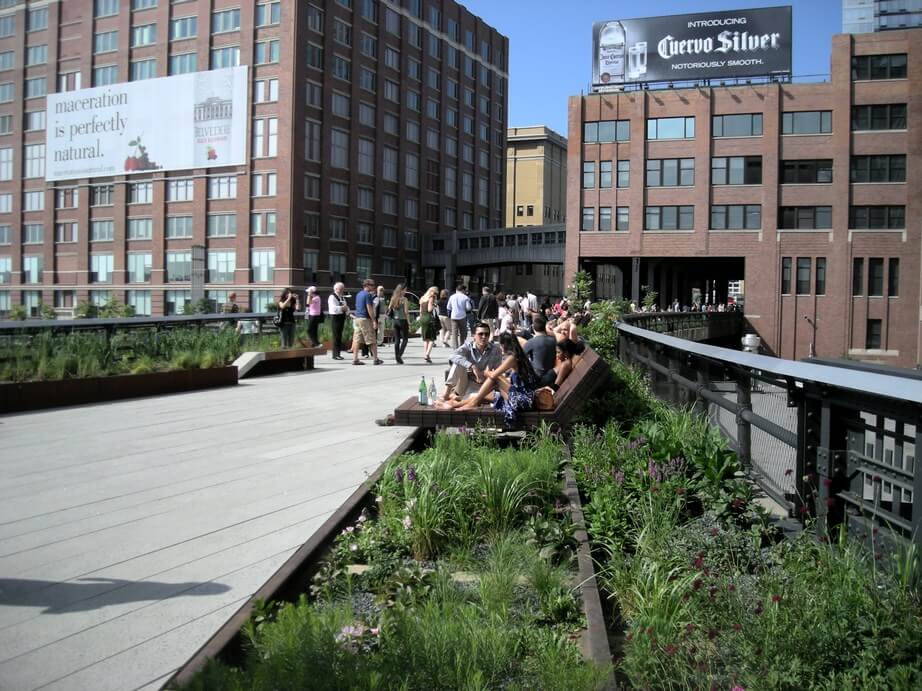 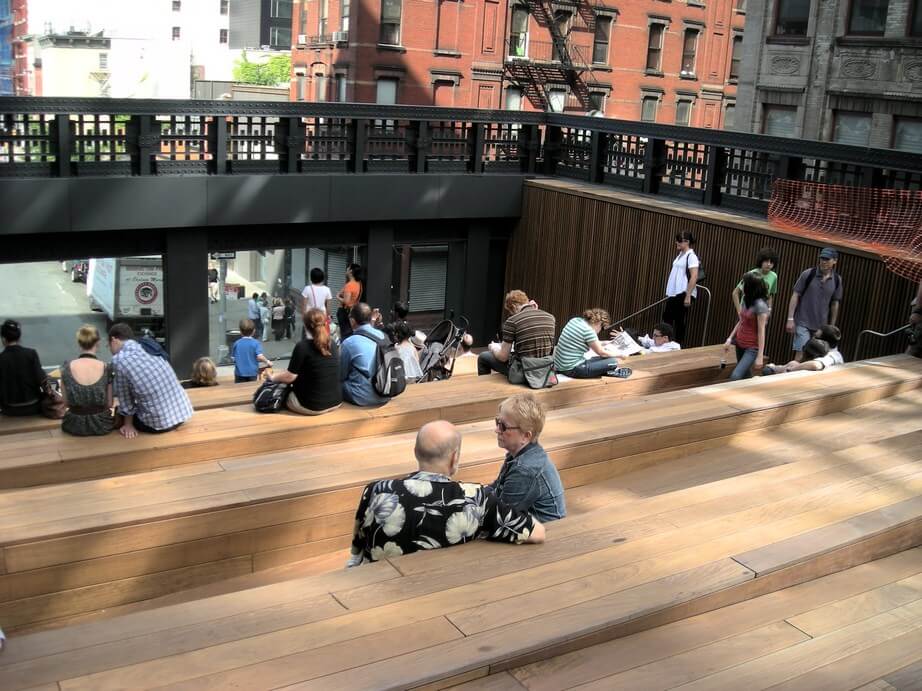 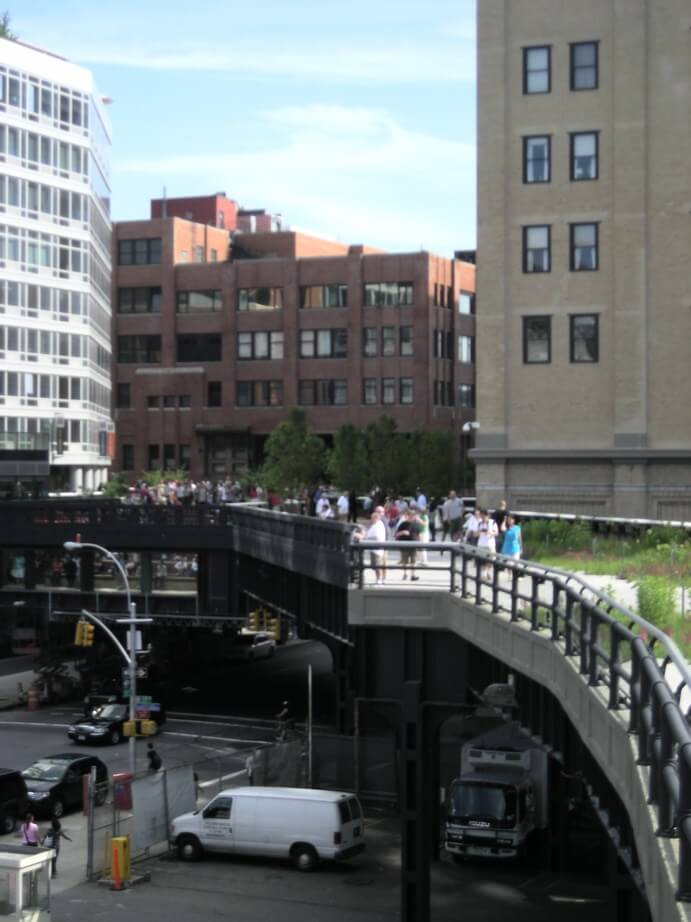 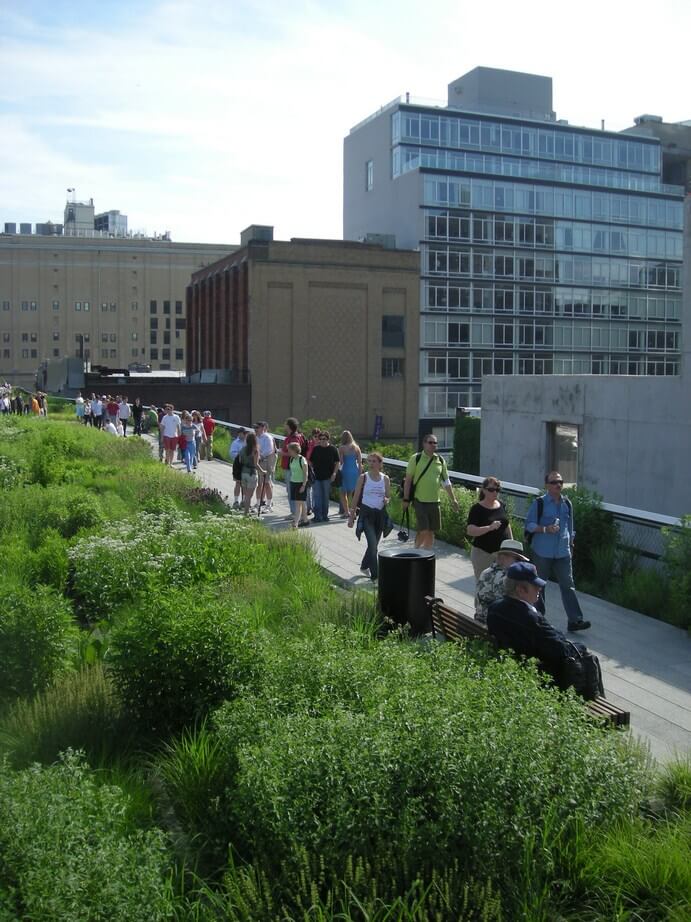