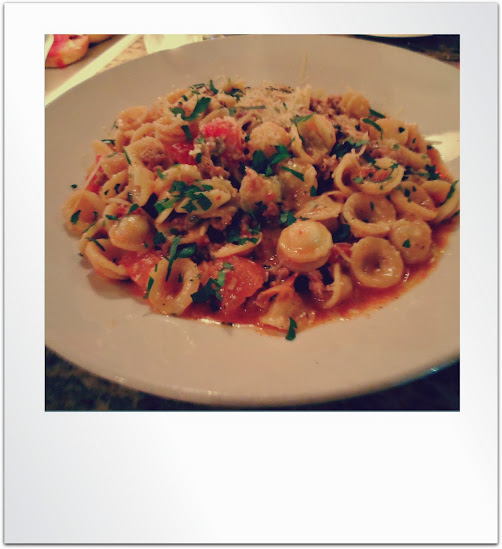 When I was in Boston a few weekends ago, I ate a lot of great food. But one meal that particularly stuck in my mind was Stella’sВ orecchiette with chile flake, sausage and cured tomato. I was surprised at richness and the depth of flavor in such a seemingly simple dish. It was hearty with a fresh, robust tomato sauce. I was still thinking about it this weekend, so I recreated a version of it on Sunday.

I hadn’t cured tomatoes before, so I used this recipeВ as a guide.В I washed, scored, boiled, peeled and cut 2 pounds of grape and cherry tomatoes. (The recipe called for Romas and I would definitely use them next time. I just happened to have these little guys on hand and used them anyway , even though it took much longer to peel all of them.) 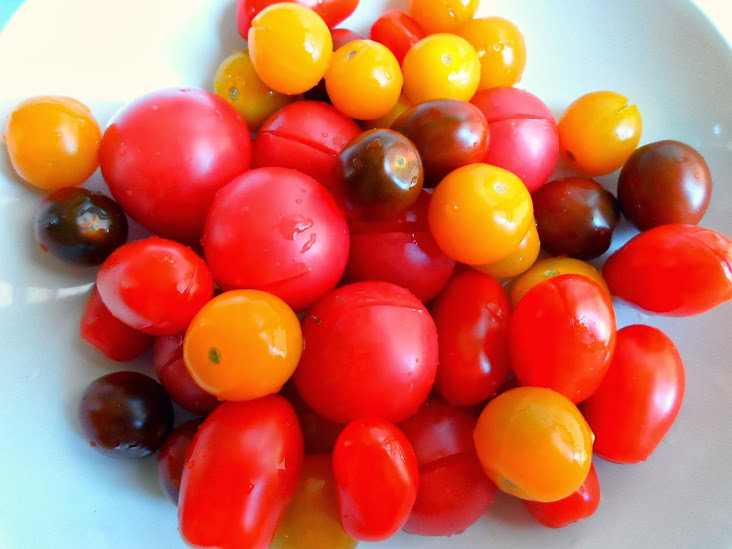 Next, I seasoned the tomatoes with balsamic vinegar, olive oil, salt and pepper, placed them on a baking sheet and sprinkled sliced garlic on top. They went into the oven at 200 degrees F for 45 minutes. 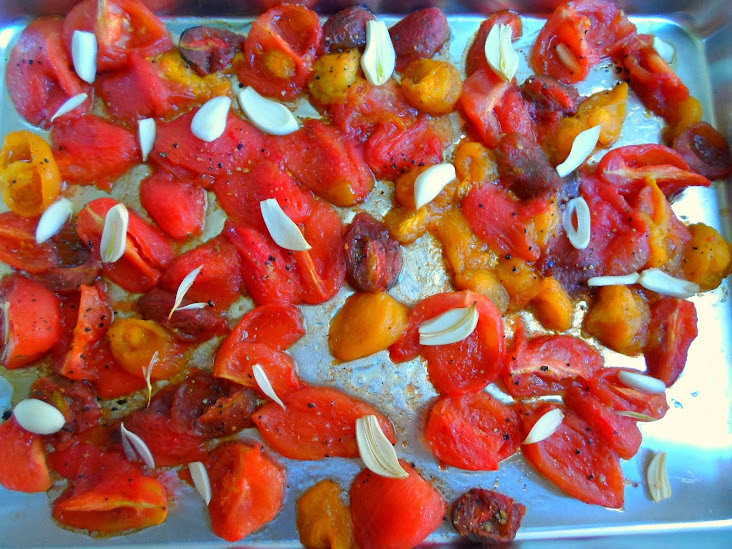 Later in the evening, I prepared a box of orrecchiette. While the pasta cooked, I browned spicy chicken sausage. (I opted for that over pork to make the dish a little healthier.) When the meat was almost cooked, I added the cured tomatoes. 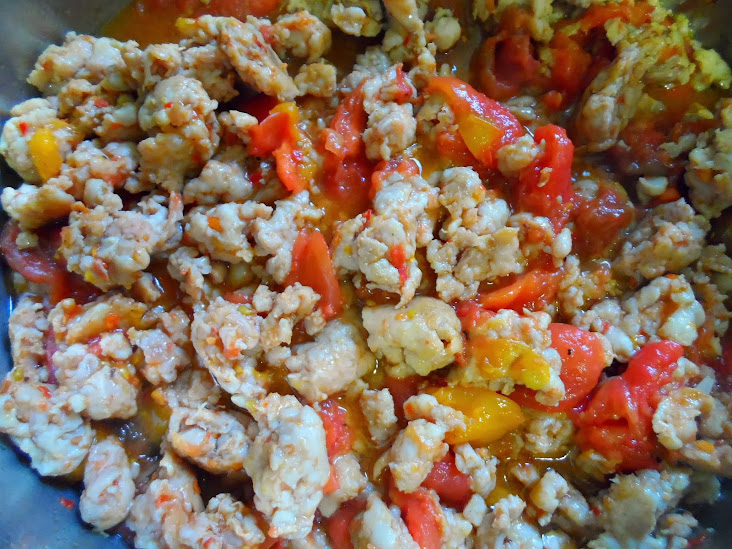 Once the pasta was al dente, I mixed the orecchiette with the tomatoes, sausages and a generous handful of chopped basil. В I was so happy with how the dish came out. It was a little less rich than Stella’s (due to swapping pork for chicken) but just as tasty–and so pretty, too! 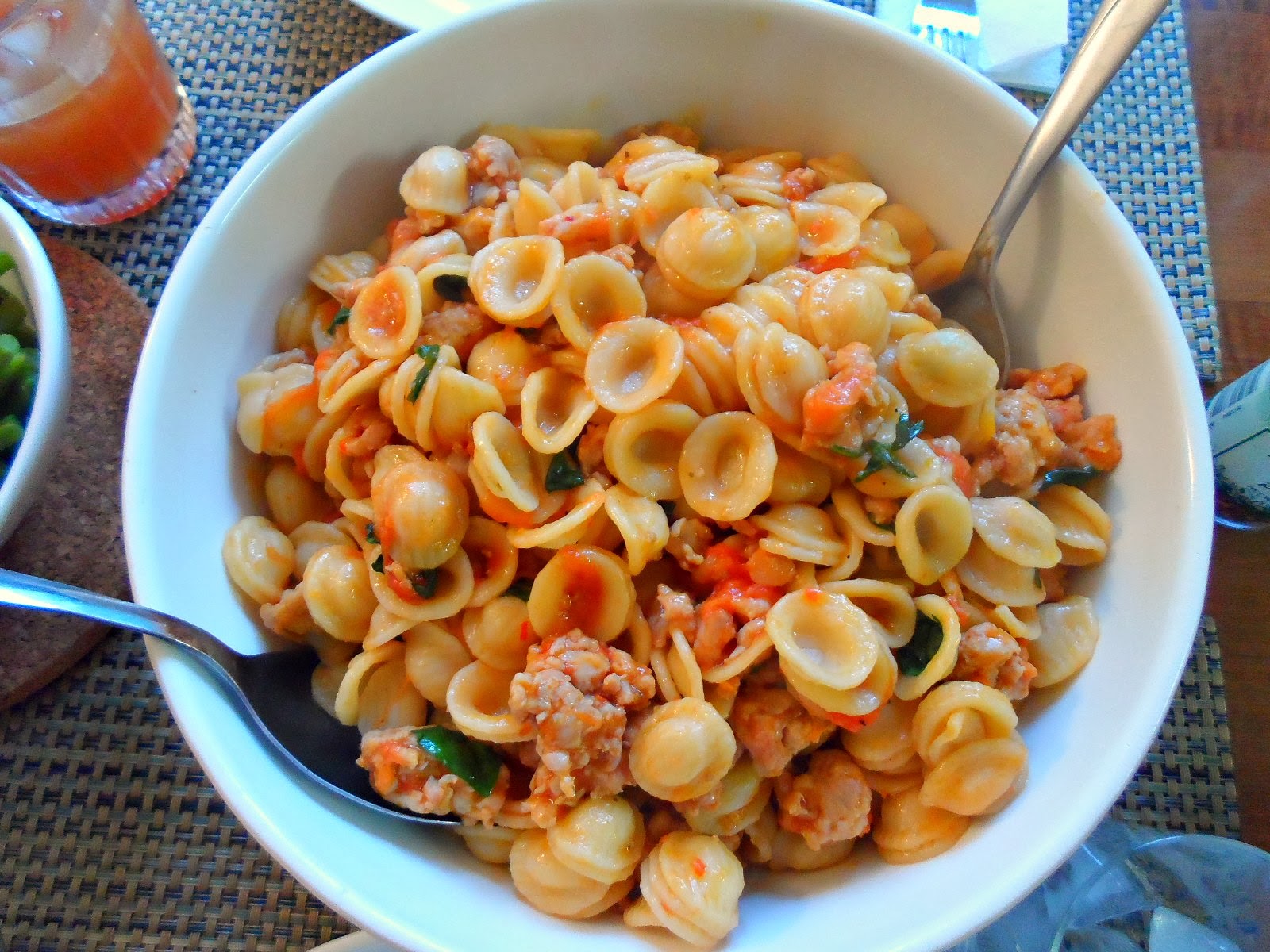 2 lbs tomatoes (I used a mix of grape and cherry tomatoes, though it’s probably best to use Romas)

Salt and pepper to taste

a handful of fresh basil, chopped

1. Wash and score tomatoes on the side opposite stem. Place in boiling water for 20 seconds. Scoop out and immediately dunk in an ice bath. Remove skin and seeds. Cut into halves or quarters.

2. Toss tomatoes with balsamic vinegar, olive oil, salt and pepper. Spread onto a baking sheet and sprinkle garlic on top. Bake at 200 degrees F for 45 minutes. Once cool, let tomatoes marinate in a container for at least two hours.

4. In the meantime, heat olive oil in a skillet over medium heat. Add sausage and break up into pieces. Once nearly cooked through, add cured tomatoes, pasta and pasta water, if needed. Toss in basil before serving. 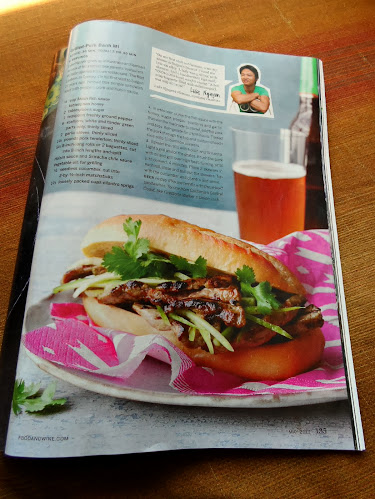 Two weekends ago, while unexpectedly sitting on a runway in Philly at 1 a.m., I stumbled across a recipe for grilled banh mi in Food & Wine‘s new travel issue. In addition to looking delicious, it appeared super-simple, just requiring a few ingredients, little prep time and two steps. I immediately knew that’s what we’d be grilling at Mal and Peter’s place the following weekend. 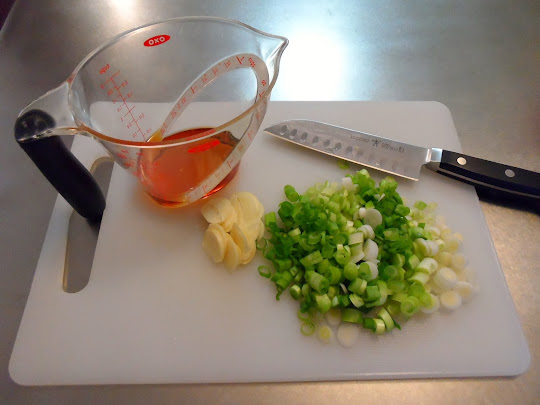 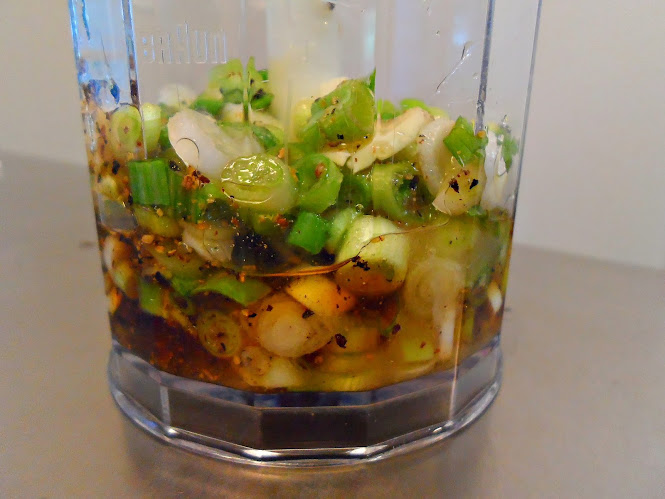 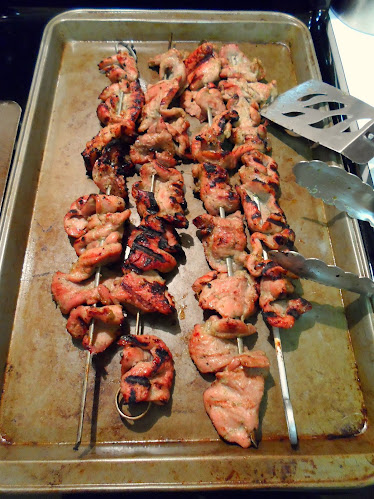 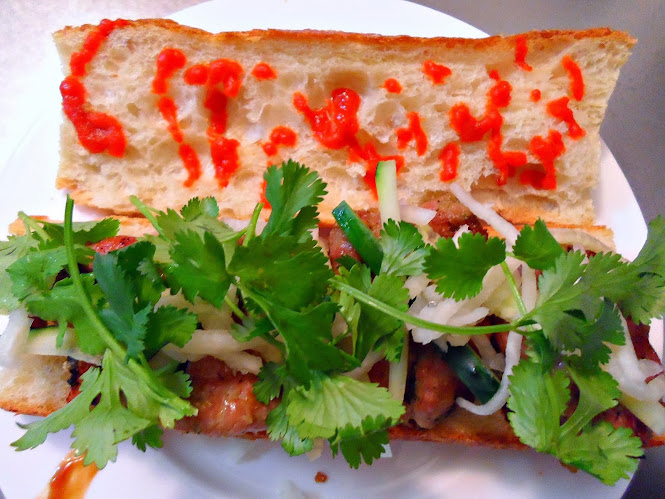 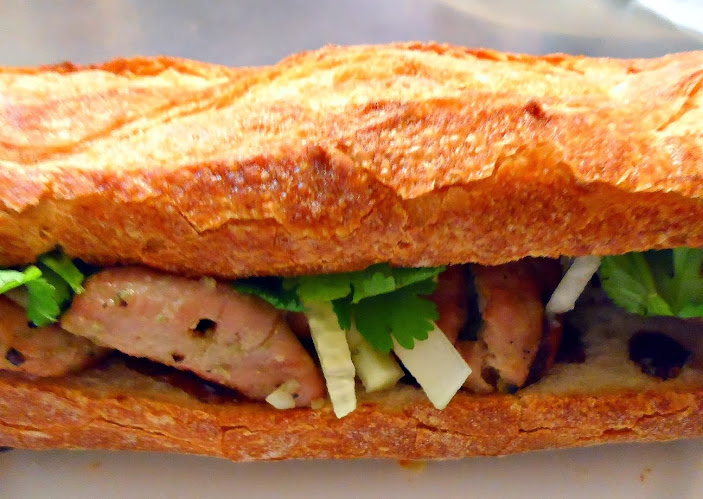 After we dumped the celery, we arrived home with one of the best CSA bounties we’ve had yet. The week’s share included fingerling potatoes, basil, sweet corn, tomatoes, a pepper, romaine lettuce, cucumbers, onions, and peaches.

Since the beginning of CSA season, we washed an cut all the veggies the day we got them to make storing and cooking easier. But a few weeks ago, we decided that it was best to cook as much as we could that day, too. That way, we’d have lunches to bring to work everyday and (in my case) wouldn’t have to stress about finding time to cook the veggies later in the week. (For a few weeks, I couldn’t escape the mental burden of having veggies in my fridge that needed to be cooked, but couldn’t carve out the time to do so.)

So last Tuesday, we set out to use as many veggies as we could in one cooking session. We made horseradish and chive potato salad. We used this fantastic Epicurious recipe to make capellini with sweet corn, basil, tomatoes, and sugar snap peas. Later in the week, we turned the lettuce and tomatoes into a simple salad, and used the sliced cucumbers for sandwiches with smoked salmon and cream cheese. Mmm…